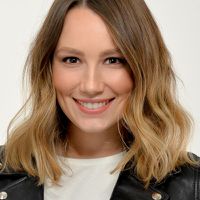 Being pregnant is a glorious, beautiful thing, right? Well yes. It is. But it's also pretty gross at times. For every glowy, gorgeous expectant mother, there's one who, like me, has suffered from appalling symptoms. In addition to crippling morning sickness (literally the worst I have ever felt—and I once woke up during major dental surgery), I've personally been struck with godawful reflux and food aversions. (Chicken schnitzel, I miss you dearly.) None of these things are very fun, I won't lie. But at least I know there's possibly a very good reason for them. For instance, some scientists believe morning sickness potentially protects a developing fetus from being affected by food-borne illnesses. Fair enough. What I do have a problem with, though, is the other stuff. Like, what is the point of pregnancy-related dandruff and burst capillaries? I'm not sure. Either way, I'm here to tell you that pregnancy isn't always that pretty. In fact, I wish someone had warned me about the gross preggo complaints I'm dealing with, ahead of time. This is why, today, I'm doing that for you, dear reader.

Did you know fluctuating estrogen levels in pregnancy can cause Bikram yoga-levels of sweating? I did not. But they can. This was one of the first symptoms I experienced, and it was extra weird because I had never heard of it. The smell of my sweat also changed early on. So not only was I a walking perspiration patch, I was suddenly hyperaware of my underarms at all times. After a few weeks this symptom settled down, but in the thick of it, I quickly adopted a few habits to keep things in check. I exfoliated my armpits every day, either via a scrub or by shaving. I also began double-dosing on deodorant every day. I now carry a stick of my favorite natural version in my bag at all times.

Okay, so this one isn't surprising, but it still sucks. Around week six, a surge in progesterone (responsible for an uptick in sebum production) and fluid retention can both cause breakouts. Worse, options for battling acne in pregnancy are very limited. Most of my go-to spot treatments were no longer allowed. I found a winner in this pregnancy-safe acne blaster, but you can also experiment with tea tree oil or AHAs. If you can, I highly recommend seeing a knowledgeable facialist for an education on how to switch up your skincare early on. Oh, and wash your pillowslips. Go-To's Face Case ($65) is brilliant.

Apparently the same thing that causes "pregnancy glow" is also responsible for an increased risk of developing broken blood vessels. (Can you guess which one I got?) I found this out after a not-even-that-hot shower when I discovered my chest was dotted with burst capillaries. Personally, I am waiting until post-baby to have them painlessly zapped off with a laser, but I'm told they'll likely fade before them. This isn't a beauty tip so much a warning—turn the hot tap down.

There isn't a whole lot of info on what causes dandruff during pregnancy, but some believe it's caused, at least in some instances, by an overproduction of oil. (Same thing that gives you preggo pimples.) For me, it was temporary and disappeared the same time my breakouts did. I used a tea tree shampoo ($10) from Avalon Organics, to treat it, and I'd recommend it. Personally, I was told that medicated dandruff shampoo was safe to use, but I still went the natural route.

Check with your doctor before using anything medicated. There are some ingredients you want to avoid using while pregnant.