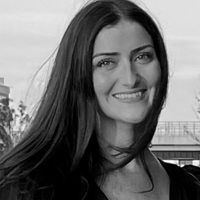 Gabrielle Kerins
Gabrielle Kerins is a contributing writer for Byrdie. She has been working in the beauty industry for five years, currently spearheading digital marketing for the clean beauty brand Indie Lee.
Byrdie's Editorial Guidelines

Aalyiah Heath, the founder of Popout Zine, created her hybrid print and digital magazine to amplify artistic voices. The Michigan native, who now resides in Paris' Belleville neighborhood, credits the community she has built with giving her a true sense of purpose. A former beauty queen, fashion student, and writer at heart, Heath uses Popout Zine to showcase the power of visual storytelling.

"I am very passionate about people and the will for people to follow their purpose at all costs," Heath says confidently. Her poised demeanor and chic street style give off an air of self-assuredness. She's composed yet approachable. I first met Aalyiah at a Halloween party in 2018, where we chatted about the recent soft launch of her magazine. Fast forward several years later, and her passion project has morphed into a dynamic digital and print platform that champions all artists.

Despite her undeniable look of conviction, Heath has been on a winding journey to find her purpose. After spending two years in a rigorous graduate program, Heath realized that while she had worked hard to earn her Master's degree, there was still an overwhelming amount of uncertainty when it came to figuring out what she wanted to do. "Attending graduate school directly after completing my undergraduate program was a bit difficult," she says. "I was still unsure about the way I wanted my life to go, yet, I was open to possibilities. I was pressured by people who wanted me to follow a path that didn’t make sense to me. My confusion and doubt led me to create something that would guide me closer to my purpose." Heath says that her publication has become the manifestation of her life’s journey in paper and digital form.

A born writer with an appetite for fashion, Heath spent a good portion of her young adult life cultivating her creativity. She studied fashion design as an undergraduate at Clark Atlanta University, eventually pursuing a Master’s in global communications. While in her graduate program, Heath worked as the fashion editor-in-chief of her school’s digital magazine, editing and curating content about industry trends.

Despite her increasing interest in writing, fashion, and visual arts, Heath grappled with translating her creative passion into a tangible career aspiration upon graduation. There was one thing, however, that she found unequivocally inspiring—Paris. "I came to Paris for university and ended up with a place I now call home," Heath says. "I had the opportunity to study fashion in one of the fashion capitals of the world, so I was excited, but I still had no career plans, which made me anxious about life ahead."

After taking inventory of her passions, Heath realized she had always had a deep-seated interest in creative mediums. "I figured, what better way to use creativity to spread a message than through a magazine," she says.

The idea was first brought to life for her research thesis project and was initially met with resistance. "It took some time to get [the faculty] on board with this new idea," she explains. The academic board was apprehensive about allowing students to submit a magazine as their graduating thesis, encouraging Heath to take a more classically academic approach. After presenting her research and collaborating with other professors, Heath was finally given the green light.

"After everyone finally agreed, the real hard work began," she says. "From sourcing to financing for printing to the work itself, it became overwhelming but indeed worth it." The first edition of Popout featured a mashup of submissions from Heath's peers in Atlanta and more recent connections. Through building the launch issue, she quickly realized the potential to grow Popout into something bigger. Heath began to view the publication as a liberating outlet and shaped the brand vision around her guiding mantra, "pursuit of purpose." The magazine's authentic ethos quickly resonated with others in the creative community. "Although [Popout] is a business, we are humans and artists first," Heath says. "We encourage our artists, audience, and team, to pursue their purpose no matter how hard the road may be."

Since its launch, Popout has seen impressive growth and metamorphosed from a magazine into a multisensory platform. The digital and print publication draws in international writers, photographers, and artists. The brand has expanded its platform to include an annual print collector's item (slated to be sold in several Parisian art galleries this year) and a direct-to-consumer store featuring unique Popout merch. They recently launched Pop TV, an on-site channel featuring docu-style shows on artists in the community.

With a steadily growing list of contributors and constant venture into new mediums, Popout continues to evolve as a safe space for artists to share their most vulnerable creations. "My hope is that Popout Zine continues to reach those it was meant for," Heath says. "I am looking forward to building our community and allowing our artists to continuously grow with us."

When you visit the Popout website or flip through the pages of their collector's print, chances are you will quickly come across the brand motto: burn the old and build the new. It’s a constant reminder of the values that reign supreme in the Popout community: authenticity, passion, and individuality. It's a nod to both Heath’s journey of self-discovery as well as that of every artist. Determined to revere every story as a work of art, Popout demonstrates the power of self-expression and how staying true to yourself can endlessly inspire others to do the same.

6 Creatives on Pandemic Lessons and How They've Been Coping