As a Plus-Size Shopper, Abercrombie Has (Surprisingly) Become My Favorite Store

The exclusive brand for cool kids is cool again, but in a brand new way. 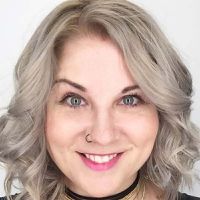 My high school in the early 2000s was chock-full of people wearing Abercrombie & Fitch. The popular clothing store was an important part of the zeitgeist for us millennials when we were teenagers. Wearing a polo with the little moose on the chest was a status symbol: You had money, you had parents willing to shop in the dark, and you fit into the clothes. As a teenager who was never thin, I always wanted to be part of the Abercrombie club, but fitting into the clothes was a battle. It was known as a brand that didn’t cater to curvy people and a store that plus-size teens resented because of it. But after a massive overhaul in the last decade, Abercrombie has now become a place that is inviting and inclusive for those of us who had written it off in our past.

In high school, I was very active but still curvy. Despite working out six days a week, I wore anywhere from a size 12 to 16. While that’s considered mid-size these days, there wasn’t a classification for it back in the early aughts, and it was certainly difficult to shop at the same stores my friends were. There was also something incredibly unapproachable about shopping at Abercrombie, from the intimidating and scantily-clad models in the windows or the booming music that made you want to shop fast and escape. As a curvy teenager, sifting through a stack of extra-small tops trying to find anything in a large (there was usually one, all the way in the back or at the bottom) just made me feel like I didn’t belong there.

Those feelings turned out to be pretty accurate. Mike Jeffries, who was the CEO from the late 1990s until 2014, didn’t actually want anyone uncool or unattractive shopping at his stores. He told Salon in 2006 just that. "In every school there are the cool and popular kids, and then there are the not-so-cool kids,” he said. “Candidly, we go after the cool kids. We go after the attractive all-American kid with a great attitude and a lot of friends. A lot of people don't belong [in our clothes], and they can't belong. Are we exclusionary? Absolutely. Those companies that are in trouble are trying to target everybody: Young, old, fat, skinny. But then you become totally vanilla. You don't alienate anybody, but you don't excite anybody, either."

Jeffries’ statement and overall outlook for the brand, along with declining sales, were noticeable. The Street named Jeffries the worst CEO in 2013 and some wondered if Abercrombie would ever bounce back. Once seen as the coolest of the cool, the brand had started to become a joke. Now that the cool teens weren’t shopping there anymore—we all grew up and realized how troubling it all was—everything started to fall to the wayside. Millennials quietly moved on with our sartorial lives and Abercrombie continued to flounder.

It wasn’t until Fran Horowitz took over as CEO in 2017 that the brand noticeably turned around. The changes, however, started as soon as Jeffries stepped down in 2014. In 2015, the brand lost the sexed-up marketing it had been using for decades and opted to ditch its shirtless models. The new plan was to focus more on being an inviting environment for shoppers with customer service that was approachable. Employees would no longer be required to wear only Abercrombie clothes, and more diverse hiring was an initiative at the top of the to-do list.

With Horowitz in place as the leader of the brand, the clothes have become more neutral, more inclusive, and more luxurious. The Abercrombie of my high school years is now gone, replaced with closet staples like floral dresses, vegan leather jackets, and bodysuits in a more accessible range of sizes. And while the denim selection is still there, it now caters to a much larger demographic. Instead of only carrying a handful of sizes, and keeping most of the stock in stores for the smallest sizes available, Abercrombie now carries from sizes 23 to 37 in virtually every cut. Not only that, but all pants are available in short, regular, and long lengths, with some even available in extra short. And best of all, Abercrombie offers a Curve Love cut that adds an extra two inches of room in the thighs. And you can get Curve Love in all the denim fits.

When you walk into an Abercrombie store today, it’s light and bright and the music is muted. You’re not choking on the smell of Abercrombie 8 perfume immediately upon entering. The brand has a whole new identity, and Horowitz has made sure that her mission is visible right on Abercrombie’s website: “Abercrombie isn’t a brand where you need to fit in—it’s one where everyone truly belongs. We lead with purpose, and that inclusive and equitable spirit is woven throughout all we do.”

I know my mom dreaded taking me to Abercrombie when I was a teenager. Not only did she hate the store environment, she knew it was going to be a letdown for me every single time. I wasn’t built to fit the brand, and the brand didn’t want me there. So over the past 20 years, I ignored Abercrombie because of how much it hurt when I was a teenager. It wasn’t until the age of TikTok that I realized how much had changed. Suddenly all my favorite mid-size and plus-size influencers on the video-sharing app were showing off the clothes they’d bought at Abercrombie. I was skeptical to say the least, but they were right. Abercrombie is now a place that caters to the millennials who were once scarred by shopping there.

With Abercrombie’s extended sizes, so many more people can shop there. I used to walk out the door and past the shirtless models empty handed. Now I can walk in and load up my arms with clothes that will actually fit. I’m bigger than I was in high school; I wear about a 16-18 in Abercrombie now. Before Horowitz, I wouldn’t have been able to find anything to fit me, but under her direction, the brand has finally realized there’s a market out there full of people who want to shop.

My favorite staple pieces now are straight off the racks at Abercrombie, including vegan leather pants that I wear with everything, chunky knit sweaters, and a black puffer coat that’s a staple in my New York City wardrobe. It feels like a weird full-circle moment for my closet to have Abercrombie pieces hanging in it again, especially after such a tumultuous relationship with the brand as a teenager. But now that they’re focused more on catering to an older demographic who values classic cuts that are still on trend, it feels right in line with my style. And while the brand has made incredible strides in terms of diversity of the models and inclusivity of sizes, there’s always room for improvement. I have hope for the brand, though, for its continued success, which probably isn’t something I would have said 10 years ago. Now, though, Abercrombie is cool again in a whole new way.

Plus-Size Fashion Is About More than Clothing: It’s Transformative