"It shouldn't be a novel thing." 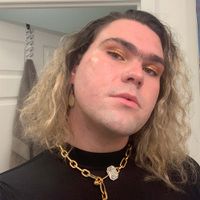 Christian Kennedy
Christian is a New York-based writer. They are currently an MFA candidate in creative non-fiction at Columbia University’s School of the Arts.
Byrdie's Editorial Guidelines

There’s a pink door to heaven on Metropolitan Avenue in WIlliamsburg. Standing in the shadow of the Hotel Indigo, down the block from Kellogg's Diner, and across Macri Triangle from Union Pool, there is a store unlike any I have ever seen. Leaving behind the gray skies of early March in New York City, stepping inside Plus BKLYN feels like a dream, but, more specifically, the dream of Alexis Krase, owner and pioneer behind New York City’s only brick-and-mortar vintage and secondhand store that caters to plus-size customers.

Inside the carpets are fuzzy. The racks are packed with bold colors and bustling patterns sized from 12 up to 6X. There’s a Marc Jacobs bag over there, and a Vivienne Westwood one over there! The couch is pink and the girls are fat. The whole environment makes me want to do a Nicole-Kidman-for-AMC style monologue about the sacredness of this space, but the fact of the matter is, there are nine AMC theaters in Manhattan alone, but only one Plus BKLYN—or anything else like it—in the entire city.

"It shouldn't be a novel thing, but for many people it is a novel thing to go into a store and feel like all the clothes can fit them. Fat people for so many years have been accustomed to shopping with their friends and fondling the necklaces while their friends try on clothes," says Krase, who's sitting on the tufted sofa in the back of the store, above a cheetah print rug with a stack of books on the table in front of us: You Have The Right to Remain Fat by Virgie Tovar; My Body is Not an Apology by Sonya Renee Taylor; Landwhale by Jes Baker.

What started in a shoebox-sized storefront on Graham Avenue in 2017 has found a new home with staying power in its current location on Metropolitan. While many small businesses struggled and ultimately shuttered during the city’s initial forced closure at the outset of the pandemic in 2020, Krase turned hard times into hard profits. 2020 was the store’s best year financially, topping it in 2021 and staying on track to do the same in 2022. It all started when Krase came into the closed storefront alone in the spring of 2020, walking down the near-deserted street and began posting items for sale on the Plus BKLYN Instagram account.

"I started doing [story sales] as a mode of survival when the pandemic hit. I didn’t know if we were going to survive. I had to lay off my employees. It was just me in here. I was pregnant and I was like 'Fuck, there goes my livelihood, and now I’m gonna bring a life into the world?'" she says. "I was desperate and terrified and hormonal and crying all the time, so I just came in here every day by myself to take pics and post items. It blew up and we started doing better."

Previously Krase and her employees had been running QVC-style live sales on the store’s Facebook page to engage with the plus community, but before COVID, Plus BKLYN was a completely in-person operation powered in large part by foot traffic and tourism.

"The first thing I do when I travel is like, 'plus size boutique,'" she explains, miming a google search on her phone. "If I'm in a different country or wherever I want to know where all the cute shit is. And now, the tourists are slowly coming back, which are people who spend money because they're so excited, but now we also have people coming in who found us on social. The resurgence of tourism hasn't been at that same level that it was, but we gained a new audience in a way."

Krase grew up in Philadelphia and moved to the city 20 years ago to pursue a degree at NYU. After graduation she worked in tech, always having a side hustle and planning to one day be her own boss. After years of managing teams and people, she decided to strike out on her own and chase her dream in fashion.

"I've always been a fat girl who loved fashion that had very little options. As an elder millennial, for me, there was nothing,” she says, her dark Shirley Temple curls bobbing with enthusiasm. “So I made lemonade out of lemons. I liked thrift shopping and I would repurpose menswear to make fashion work for me. I thought for sure when I moved to New York City for college that there would be so many options for me because it's the fashion capital of the world, but there wasn’t. There was nothing here. So when I decided to do my own thing, it was a no-brainer. I thought, 'I have this struggle, there's millions of people like me who have this struggle, and if I build it they will come.' That was my thought and that’s what I did."

After six or seven months of serving the community with curbside pick up in 2020, Plus BKLYN has slowly circled back to its full operation. The store's two dressing rooms re-opened shortly before I visited Krase, having closed them during the Omicron spike at the turn of the year.

"We have been more careful than most I would say," Krase says. "For me it's really important, specifically, because of the whole rhetoric around plus and obese people and COVID. I don’t know if there’s an exact correlation with Omicron, but I do know there's a lot of medical fatphobia and a lot of fear instilled in our community. So, for me, it’s important that during this time we are being super safe, so everyone feels safe and good and protected when they come in here."

As of March 1, they've scheduled 182 drop offs of clothing to sort through, curating the content for the store or donating it. Krase snaps her fingers explaining how quickly the store turns over massive amounts of clothing. The volume of their buy-trade-sell business model can be gauged by the quickness with which new items appear and are sold on the store's racks and Instagram stories. Not to mention the carloads of clothes Krase hauls to be donated that don’t quite fit her funky, downtown vibe.

"The main aim is how can we keep clothing out of incinerators and landfills? We are giving clothes a new life," she says. "The modern thrift section is clothing people are moving out of their closets, and we can give it a new life by giving it to someone else. We carry ASOS, and that’s technically a fast-fashion brand, but we can help extend the life of clothes like that. It's about creating circularity in clothing, and I feel really good about what we have been able to do thus far. Everything we don’t accept we try to find a good outlet."

As the weather turns warmer, the store will hit its peak season, which is hard to imagine considering the packed shelves of bags behind Krase that are ready for customers to pick up. During fall and winter, Krase and her team put together surprise bags to clear out built-up inventory. Customers can choose between a small or large bag and receive surprise pieces that build an outfit or fit the customer's preferences. It also gives employees at the store the chance to play stylist. But for Krase, the most exciting season is summer.

The all-caps sign out front says, “Plus size clothes that don't suck!” Bright white block letters on the window read, “Your body deserves kindness.” An illustration behind the register says in bold, "Yes fat, yes femme." As a trans, plus-size shopper, I usually have an image of myself in the eyes of those shopping or working nearby. A thought bubbles in the back of my head, a prediction of what they’re thinking: "They think they’re going to fit into that?" In most stores, my goal, first and foremost, is to avoid looking delusional. Second is to walk out of the dressing room having at least one thing fit.

After our interview, I took some time to peruse the racks and tried on six things in the dressing room, and for the first time in forever, every single one of them fit and the bill didn’t come close to breaking the bank. (The vintage sections are a bit more expensive, but the robust modern thrift section averages 20 to 30 dollars per garment.) The store manager, Ivy, was sad I didn’t model the looks for her, but I told her I was just so excited to go from one piece to the next, each fit more statistically unlikely than the last had I been in any other store. I told her that I’d be back with a wide grin.

"How many people come into our dressing room and literally cry?" Krase turns to ask Ivy behind the register. A lot. "I'm not even kidding, people weeping tears of joy because they've never been able to feel comfortable. That is so fucked up and sad to me, but I feel such immense joy that we can serve a little part in creating the tide of change, or changing someone's experience, or helping them feel good in their skin, and making people feel more confident and cute," she continues. "And know that they don’t have to follow stupid fashion rules about stripes."