Plastic Surgery Is Only Controversial When You're Trans

If you're cis, it's about "confidence." 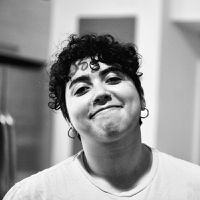 Rachel Komich
Rachel has been writing professional for five years. Since 2018, they have been the founder and editor of Butter Press, a literary magazine centering queer, trans, and nonbinary writers.
Byrdie's Editorial Guidelines
Medically reviewed by
Dara Liotta, MD, FACS


In 2018, I took a job creating social media content for plastic surgeons. I churned out content for Instagram and Facebook, spending hours defining deliverables on email and making small talk with strangers at the WeWork coffee machines. Nothing out of the ordinary, except we wrote captions detailing surgical procedures and edited videos with highly sensitive content. We were selling confidence to people, and it had to look perfect.

I covered up stranger's nipples on my work computer for two years. I stitched before and afters together, hiding anything Instagram would flag as nudity or "sexually explicit." I watched video after video of people lauding their surgeons, telling prospective patients their lives are much better after plastic surgery. It was an endless loop of larger breasts, straightened noses, and accentuated waists.

I also hid my pronouns.

I learned the difference between a needle and a cannula and which breast implants benefit smaller, more petite bodies versus which implants look better on curvier women. I learned the ins and outs of liposuction and fat transfer and how to spot a nose job from miles away. I witnessed people augment the very parts of myself I wanted to hide. This kind of choice felt foreign to me—the idea that people could decide they wanted their bodies to look a certain way and then do something about it.

When I went to work, I performed a gender that didn't belong to me.

Caption after caption included surgical details, but more compelling to prospective patients were testimonials. The story we were selling was one of being at ease with your body. People felt more confident after surgery and wanted to share their new selves with the world. Their new image of themselves changed how they interacted with the world and felt about themselves. Women felt more confident post-surgery, and men reveled in their hand-carved "masculinity." Both genders finally looked like their true selves, and plastic surgery was to thank.

Gender affirmation surgery, also known as transgender confirmation surgery, often elicits the same result. Previously dysphoric patients report the way they look matches how they feel they should look. A study found trans people were far more likely to have comorbidities such as a mood and anxiety disorder and more likely than gender-aligned people to be on antidepressants.

Each day, I witnessed cis-gender people who already had the privilege of resembling the gender they identify with, seeking to do so even more. As I answered to pronouns I do not claim, women sought to look more feminine, and men wanted to look more masculine. It's all a gender performance.

When I went to work, I performed a gender that didn't belong to me. I constantly wondered if I was acting feminine enough and if my clothes were just the right blend between feminine and masculine. I didn't want to stand out, and I didn't want people to ask me questions. I was already gay, and that felt like enough attention. I was putting on a gender-play show, a performance that so many people do not even know they participate in. Weren't these patients, then, just adding to their costume? The difference was that these people accepted their gender and sought to accentuate it. They looked into the camera and said proudly: "Now I look exactly how I have always wanted to look."

It was easy because it was acceptable.

Trans patients, on the other hand, have to jump through hurdles and hoops to achieve the same gender euphoria, the same satisfaction of feeling at home in one's body.

Health insurance is not always a viable option for trans people seeking confirmation surgery, as many work on a case-by-case basis. As of 2021, only 24 states ban total transgender exclusions for state-regulated health plans. Requirements range from referral letters from doctors, proof of gender-dysphoria, and at least one year of hormone therapy, depending on the procedure. Sometimes, you need two or more letters of recommendation and evaluations and even proof of one year living in their correct gender identity.

Surgery can range anywhere from $6000 to more than $50,000 depending on the procedure, not to mention years of therapy and the cost of hormones. With roughly 30% of transgender people experiencing poverty, transitioning isn't always viable.

It took two years before I saw a doctor I worked with even reference transgender surgery. With each patient I cropped, edited, and posted, I felt more and more frustrated that they could access a cosmetic surgery that, for trans folks, is lifesaving.

When I brought up the lack of trans patients to my co-workers, I was told it was less lucrative and wouldn't be worth advertising. The cost of a post outweighed the benefit of acknowledging the existence of trans patients. This was assuming that the doctors even performed gender confirmation surgery or accepted trans patients in the first place.

Then, it dawned on me the different worlds my co-workers and I lived in. For them, it was easy to brush aside trans patients, and it was business. I thought about that conversation for weeks. The happiness of trans people wasn't profitable enough, so it became easy to ignore.

When a co-worker's client asked her to showcase a trans man's top surgery result, I thought finally. I asked to write the caption for that post. She looked at my writing and said, "What is FTM? Let's erase it." I wanted to speak the language I knew other trans people would understand. When I told that co-worker that it meant female-to-male, she didn't add it back in.

If transgender and cisgender people seek surgery to look and feel like their true selves, why is it so much harder for transgender people to access? I don't have the answers. But it's worth asking the questions.

These Are the Transgender Makeup Questions This Makeup Artist Gets Asked Most
Article Sources
Byrdie takes every opportunity to use high-quality sources, including peer-reviewed studies, to support the facts within our articles. Read our editorial guidelines to learn more about how we keep our content accurate, reliable and trustworthy.