Why This Iconic "Grandmillennial" Nightgown Is Winter's Must-Have Sleepwear

A deep-dive into the history of the Lanz nightgown.

Flannel nightgowns once conjured images of grandmothers and Mayberry. But housebound life, dipping temperatures, and a near-universal longing for comfort of all forms mean that the coolest item of clothing right now is exactly what our foremothers wore to sleep: Lanz of Salzburg nightgowns.

Sleepwear should be comfortable—it shouldn’t be too warm, too cold, too fitted, or too diaphanous, entangling you in folds of fabric. Lanz’s flannel sleepwear found the perfect balance. The nightgowns took off when Austrian founder Joseph Lanz moved to New York in the 1920s, charming New Yorkers with his quaint prints—traditionally vertical ribbons of Alps-inspired flowers or flower-encircled hearts interspersed with color-blocked vertical cursive of the Lanz of Salzburg logo. Finishing touches included eyelet lace at the cuffs and a Peter Pan-like collar. The style was dubbed Tyrolean, for the mountainous Alpine region next to Salzburg, on the border of Austria and Italy. Look past the satin trim and heart buttons, and you’ve got flannel armor against Alpine chill, with elastic cuffs meant to keep out sneaky drafts.

There’s an innocent, near-prairie core charm to the style and descriptions. Knee-length gowns are “waltz-length,” and there are often pockets and sensible buttons down the bodice. I had to deep-dive into sewing lingo to understand that the trumpeted “shirred yokes” meant gently pleated bodices, often with ruffled lace around the seams.

Lanz of Salzburg/Design by Cristina Cianci

Over the years, the prim, ruffled nightgowns gave way to hip pajama sets with cool prints or cloud-soft short sets. And the flannel gowns of the Lanz collection faded from popularity and visibility, eventually being acquired by California-based sleepwear line Eileen West. But the line’s reputation persisted, and it remained a nocturnal totem for wholesomeness. Zooey Deschanel’s quirky Jess wore the classic red tartan during a Christmas episode of New Girl. And coming-of-age confessional queen Judy Blume wrote that a Lanz nightgown was the most-wanted gift of her 1950s protagonist in her most recent novel, In the Unlikely Event. My own mom’s greatest adventure story hinges on her Lanz nightgown. On an overnight train in Eastern Europe taking them behind the Iron Curtain—a brazen trip she and a dear friend had embarked on from their study abroad session in England—stern government officials stopped their train to inspect papers. Only the innocent vision of two girls in their Lanz nighties compelled the officials to allow their entry, unlike everyone else they’d met who’d tried.

But that wholesomeness could also read as dated. In their joint memoir and business book, The Glitter Plan, the founders of Juicy Couture cited Lanz of Salzburg as the tipping point for them to reject licensing opportunities, referring to the “frilly” nightgowns as beloved by one’s “Pilgrim grandmother from Rhode Island.”

Indeed, for years, the most reliable place to buy the grandmotherly apparel was at the retail equivalent of Grandma’s house, the charmingly trend-averse Vermont Country Store, a 74-year-old family-run series of general stores, with a robust catalog and e-commerce business. A virtual time capsule, the stores offer vintage-inspired Christmas decorations, liquored fruit cakes, and sensible fashions, including tartan jumpers, ragg cardigans, and, of course, flannel nightwear, starring Lanz of Salzburg.

The store has long been the biggest carrier of the nightgowns, offering dozens of exclusive styles and designs. “It’s classic and timeless,” says Michelle Gershkovich, head of merchandising. “We’re not on-trend; if it’s trendy, it’s not really the Vermont Country Store. People can come back year after year, decade after decade, and find things they love to share with people they love. We’re about timeless traditions that are classic today, and that includes Lanz flannel nightgowns.” The catalog features dozens of styles, all ready to ward off winter chills.

“Customers send us photos of the grandmother, mother, and child, all wearing their Lanz,” says Gershkovich. “Nothing says ‘Christmas’ more than Lanz on Christmas morning.” And the Vermont Country Store knows how to say Christmas—the Christmas print exclusive to the Vermont Country Store’s site is a red-and-green Christmas tree-dotted print named Tyrolean Forest, conjuring crisp wintry air, snow-capped firs, and a vague promise of Gluehwein.

We're seeing a surge in this sleepwear. People crave something cozy and safe and comfortable, which is flannel. 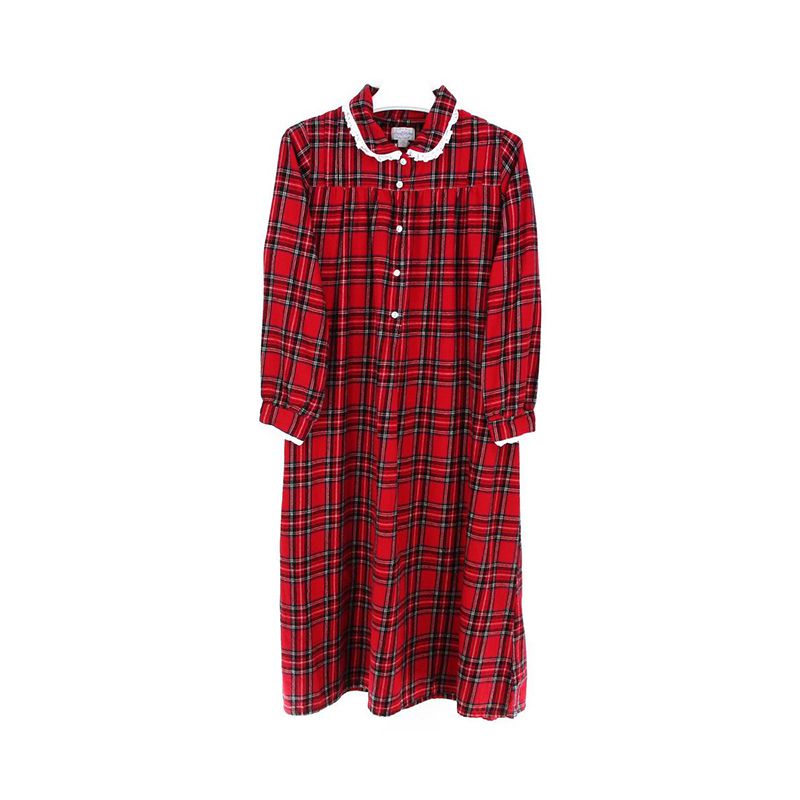 And the nostalgia of Lanz as our mothers’ and grandmothers’ nightwear–which could formerly have been cause for derision–has served to make it more appealing, giving a sense of family connection in a year when that hasn’t always been possible. Beyond its loyal fan base, there’s been a surge in Lanz's nightgown sales at the Vermont Country Store this year. Its catalog proclaims that the nightgowns are “a tradition you never outgrow,” in hopes that it will inspire a new generation to start flanneled traditions.

Dallas-based sisters and lifestyle bloggers Blair Flowers Butler, Ellen Flowers Dickenson, and Janie Flowers Lazares, of The Perennial Style, have worn Lanz nighties at Christmas their whole lives. "Ever since we were little, wearing our Lanz gowns on Christmas Eve has been one of our favorite holiday traditions,” says Dickenson. “Our mom always wore Lanz gowns in college and had such happy memories wearing them in her sorority house, so she wanted to pass the tradition down to us. My mom, sisters, and I all have a different pattern that complements each other, and they are so cozy and timeless!”

It’s a tradition that the sisters are passing down to the next generation, too. “Now that my sisters have two baby girls, I was so excited to surprise each of them with Lanz gowns in their matching patterns to share the tradition with their daughters this year," Dickenson shares.

The line took on iconic status at Christmas in the 1950s when families would dress children in matching red-flowered gowns or pajamas for Christmas morning photos, creating the original “Family Pajamas” moment. For many families, it endured for decades and through generations. My own sisters and I would receive a new Lanz nightgown each Christmas Eve to wear before Santa’s arrival, and our childhood Christmas pictures could just as easily be from the 1950s as the 1980s and 1990s—the original “grand millennial” fashion statement.

Lanz of Salzburg/Design by Cristina Cianci

Perhaps Lanz would’ve puttered along in its relegated role of trusty Yuletide tradition, but housebound fashions have changed everything. Call it a nightie or a nap dress, but comfortable, feminine loungewear and sleepwear have become paramount when days are spent indoors, and some days, we don’t even change out of nightwear. Lanz is up for the round-the-clock challenge. Its 100% cotton flannel is built to ward off chill and maintain the fabric’s integrity after dozens or hundreds of washes. It’s not confining, but not absurdly roomy. And Lanz is beloved for its inclusivity, with sizing through the Vermont Country Store ranging from size two to 32. The appeal has translated to a huge boost in sales. “We’re seeing a surge in this sleepwear,” says Gershkovich. “People crave something cozy and safe and comfortable, which is flannel.”

Just last month, Lanz, which is owned by Komar, the largest sleepwear manufacturer in the country, launched the first Lanz of Salzburg website after noticing sales shoot up during quarantine. The site offers perennial favorites in tartan, buffalo check, novelty prints, and Tyrolean, in the same styles you’d recognize from decades ago. “We are deeply committed to the brand heritage and the intimate connection that our customers have to both Eileen West and Lanz of Salzburg,” says David Komar, Principal and CMO of Komar. “Our mission is to keep the brands true to their origins, and maintain the traditions that have helped to create the timeless and beloved brands."

That said, there’s room to expand, including dipping into the vaults to bring back old prints and expanding the inclusivity. The 21st-century style additions mean a matching “Fam Jam” moment for the entire family, with styles for toddlers, kids, and men, and red tartan for the dog, too. In true Lanz style, it has stylish contrasting edging.