I Tried a Pheromone Potion and Didn’t Tell My Boyfriend

What Are Athena Pheromones? How To Prepare What To Expect
Side Effects The Final Takeaway

Pheromones are a curious phenomenon. Though scientists have examined their presence in animals and mating, research on the role they play in humans and human relationships is, to put it frankly, all over the place. There is one study that claims male pheromones gathered from their armpits helped regulate women’s periods (weird).﻿﻿ Or another study which found that babies as young as three days old would turn their faces to clothes worn by their own mothers, and ignore others (sweet).﻿﻿ And, of course, there’s the fact that you always somehow happen to get your period at the same time as your roommate (annoying)…yeah, that’s pheromones, too. So let's just say curiosity got the best of me and I did what any 20-something-woman would do: I started digging for more info. Ultimately, I stumbled upon Athena Pheromones, which promised to amplify my sexual powers unlike ever before.

Chemical substances that, when secreted by a human or animal, trigger a behavioral response in members of the same species.

Keep scrolling to find out more about my experience with Athena Pheromones.

What Are Athena Pheromones?

After stumbling across an old article about pheromones in one of my internet blackouts (pretty sure I had started off looking for rose perfumes), I did some highly scientific research that consisted of me googling “pheromone studies” and came across this website called The Athena Institute, which was founded Winnifred Cutler, PhD. After I got over the fact that the site didn't appear to have been updated since the early aughts (seriously, click on it—please), I realized I had stumbled on a pheromone gold mine. Turns out, the Stanford-educated Cutler has been quite the trailblazer in female pheromone research, being one of the first discover the link between pheromones and what she calls “sexual attractiveness” (or, as we might rephrase in our modern age: “Does this person want to go home with me?”). Not only has she carried out a ton of research in the field, but she actually created a chemical copy of the pheromones that “sexually attractive women in their late 20s and early 30s naturally emit” (their words, not mine).

According to a customer service representative at The Athena Institute, "Athena Pheromones are designed to increase the romantic attention you receive from the opposite sex. They are cosmetics, not aphrodisiacs, and unlike other pheromone perfumes or cosmetics." The representative adds that a study conducted by researchers independent from Athena Institute, the product was found to be successful for 74 percent of those who wore it. "We cannot guarantee our pheromones will work for everyone as body chemistry differs, but when worn as directed, they work for most people." Priced at $99 for what seemed like a tiny vial of a clear liquid that could be water (or vodka) for all I knew, I scoffed at the gimmickiness and did what any smart, level-headed woman would do: I bought it immediately.

This is Why Calone is Such a Popular Perfume Ingredient

How To Prepare To Use Athena Pheromones

When my bottle of Athena Pheromones arrived, I actually thought it had leaked out in transit—it was tiny, like, the size of my thumb, and was only filled up halfway. But it was sealed, so my only conclusion was that this pheromone potion was so powerful that two ounces (or however much was in the vial) were all it would take to make me the hottest person in the room. After undoing the stopper, I inhaled eagerly—and was disappointed. It smelled like….nothing, with a touch of rubbing alcohol. The instructions said to empty the bottle into one of my perfume bottles and to apply—not spray—directly on my neck, wrists, and behind my ears (and not to blend with any oils, which can be layered separately but should not be blended into one potion.) Sadly, none of my perfumes had caps that came off. My heart heaved with annoyance and grief. Here was this potion that promised me the world (or rather, my boyfriend) at my feet, and yet I couldn’t use it. I felt like Cinderella without the other glass slipper, her prince slowly coming closer and closer in the horizon (but actually though—my boyfriend was driving home from work and I needed this pheromone spray on me so he would offer to cook dinner).

What To Expect from Athena Pheromones 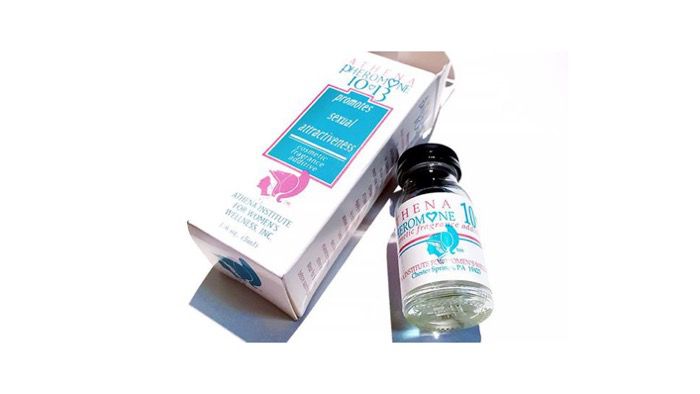 Determined not to give up, I decided to just apply the Athena Pheromone potion directly on my skin. Right afterward, I heard a knock at my door—the prince arrives! I eagerly threw open the door, screamed “HI BRYN!” and stared at him with a crazed smile. He gave me a strange look, kissed me briefly on the cheek and said something about how he needed to pee, then brushed past me to beeline straight to my bathroom. I was crushed. A toilet was more appealing than me. The potion was a fraud.

Later that evening, however, things changed. I’m lucky to be with someone who is always open with compliments and affection, but I swear that night he seemed especially appreciative. At one point, he gazed at me and—I kid you not—asked, “How are you so pretty? You’re like a model!” to which I may have laughed maniacally and screamed “IT’S THE POTION! THE POTION WORKED!” He gave me another strange look and went back to watching Last Week Tonight.

I used the pheromone concoction for the rest of the week and felt like a new woman each day I put it on. I openly chatted up everyone from my doorman to the parking attendant at my work, reveling in my newfound secret powers of “sexual attractiveness.” My boyfriend was ever attentive, doting, and affectionate, as always (perhaps the results would have been more dramatic if I had been dating someone who sucked).

Editors' Picks: The Fragrances We Wear for Seducing

While pheromones are most often thought of as attractors, there can be too much of a good thing. In some cases, the secretion of pheromones has been found to affect mood—generally leading to endorphins (and therefore making people happy or sexually aroused, as a response).﻿﻿ On the flip side, though, some pheromones could lead to agitation or irritation.

In the end, I stopped using the pheromones because I was alarmed at how quickly it seemed to be disappearing. And also, because I was probably aware that part of the reason I seemed to be reveling in its powers was because of the placebo effect, I decided to bestow the last few drops to a single coworker and told her to follow the proper instructions to make it last longer. (According to the Athena Institute rep, one vial of Athena Pheromones should last four to six months, if used as directed.)

Would I pay $99 for a pheromone potion again? Probably not. Did I get great story material and maybe-possibly enjoy the feeling of having a secret superpower no else knew about? Yes, yes I did, indeed.

Spritz These 14 Perfumes and Prepare for Endless Compliments
Article Sources
Byrdie takes every opportunity to use high-quality sources, including peer-reviewed studies, to support the facts within our articles. Read our editorial guidelines to learn more about how we keep our content accurate, reliable and trustworthy.