Paula's Choice is giving Gen Z *exactly* what they want.

Karli Bendlin
Karli is a senior editor at Byrdie. Before joining the brand, she held roles on the editorial teams of PeopleStyle, Allure, and Furthermore, Equinox’s digital magazine, writing about beauty, wellness, and pop culture.
Byrdie's Editorial Guidelines
Fact checked by
Michelle Regalado

Ironically, the most difficult battle I’ve gone through with my skin occurred when I first started in the beauty industry. After years of practicing skincare minimalism—partly because I was on a college student’s budget and primarily because it had always worked for me—I was suddenly granted access to hundreds of free beauty samples when I started my first job at a magazine. In an effort to jump headfirst into my new career (and to see what I’d been missing), I did what many people in my situation would do: I put absolutely all of it on my face.

Face masks? I approached multi-masking with an Olympic-like mentality. Peels? I saw no harm in doing several a week. And as for serums, I layered them on like I was trying to create a glaze that would put Krispy Kreme out of business. When my skin retaliated with some of the worst breakouts I’ve ever experienced, I only doubled down, trying to undo the damage with enough spot treatments and clarifying masks to unclog every pore in the Northern Hemisphere. Even after I tried to return to my previous minimalist ways, my skin continued to break out, like a moody teenager who’d gotten their first taste of rebellion and refused to look back.

I was at my wit's end, which is why when I received an invite to an event for a Paula’s Choice skincare launch, I immediately RSVP’d yes. I’d heard enough about the brand from other editors and spotted their products on plenty of shelfies to know it was the real deal, even if it wasn’t as splashy as some of the other offerings in the beauty closet. Paula Begoun herself, the founder of the eponymous brand, was also something of a legend in the industry, so when I saw an opening to talk to her at the end of the event, I approached her near tears to ask for advice.

Her solution to my months-long skincare woes? “Cut it all out.” While publicists and fellow attendees wrapped up the event around us, Begoun patiently sat with me as I walked her through every step of my skincare routine. She pointed out which steps were necessary, which ones I could skip, and which ones I would never need (read: multiple peels are never a good idea). Like my personal skincare fairy godmother, she was unflinchingly honest about what my skin needed and what results her products could—and couldn’t—deliver. She recommended a gentle, minimal routine and disappeared into the night (or rather, a black car), and my skin has been better off ever since.

It’s this same authenticity and less-is-more approach that had solidified the brand—and Begoun herself—as a trustworthy source in the beauty industry. And while Paula’s Choice has always been popular, racking up multiple beauty awards over the years, it still felt somewhat like an insider secret. It was a brand that all your skincare-savvy friends knew and raved about, but it hadn’t quite reached the ubiquitous fame of brands like Glossier and The Ordinary.

That is, however, until last year, when a Paula's Choice product experienced a spectacular increase in demand, complete with the kind of waitlist numbers that are usually reserved for the latest Yeezy drop. How exactly did a product that’s been on the market for over two decades suddenly sell out multiple times over? Simple—it was shared on TikTok.

The undeniable hero product of Paula’s Choice is the Skin Perfecting 2% BHA Liquid Exfoliant ($32), a salicylic acid formula that applies like a toner and works to unclog pores and shed dead skin cells. The gentle exfoliant was the brand’s best-selling product for years, and had garnered a loyal fan base of editors and beauty enthusiasts both IRL and online (it’s a longtime darling of skincare Reddit). Sometime last year, however, the product catapulted from a place of relative popularity and became a bonafide phenomenon. 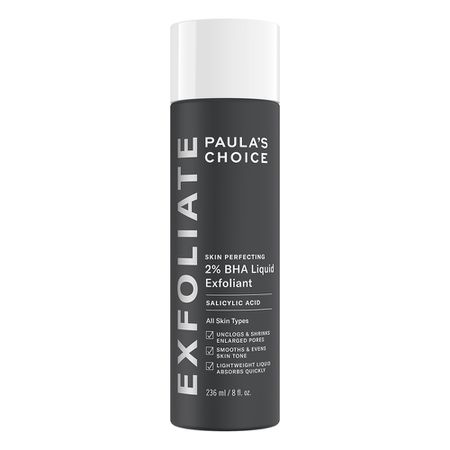 The brand credits TikTok user Amelia Olivia with sparking the exfoliant’s meteoric rise on the app. Olivia, a creator who regularly posts beauty content—including her takes on the app’s eternally popular “Get Ready With Me” videos—first shared a TikTok about the product in early 2021. “I’ve literally found a product which makes you look like you have a glowy filter on your skin,” she gushed in the video, which at its peak had racked up over three million views and 400,000 likes, according to the brand.

As per usual, TikTok users wasted no time in getting their hands on the so-called miracle product. Soon after Olivia posted her video, the Skin Perfecting Liquid Exfoliant sold out on both Amazon and the brand’s website. Dozens of other beauty enthusiasts on the app also began sharing their own rave reviews of the product. A quick scroll through the Paula’s Choice hashtag—which has over 98 million views and counting—reveals that the vast majority of videos are overwhelmingly positive, and often contain before-and-after photos that are almost too impressive to believe.

In today’s oversaturated beauty market, going viral on TikTok is no small feat for any brand, but especially not for one like Paula’s Choice. The 27-year-old brand doesn’t possess many of the qualities that some brands seem to *think* Gen Z customers want (namely: colorful packaging, cutesy names, and splashy marketing). And while it’s true that these traits have worked for some brands, the success of Paula’s Choice on TikTok proves that there’s something Gen Z cares about even more: results.

“Gen Z has proven to be especially savvy about the products and ingredients they use, and we know that our no-hype, transparent approach to skincare appeals to this discerning demographic,” Erika Kussmann, the CMO and General Manager of Paula’s Choice, explains. “Our formulas are incredibly effective and do what they say they will—delivering great value for Gen Z customers who want to make sure they’re getting the most for their money.”

Plus, rather than deck out their packaging with fancy extras, the brand has focused on minimalism and sustainability, which the environmentally-conscious generation also appreciates. “We streamline our packaging and use airless pumps and tubes to protect vital ingredients from air and light which keeps them effective and minimizes waste,” says Kussmann.

If anyone was surprised by the brand’s sudden TikTok success, it wasn’t founder Paula Begoun. “My reaction was pretty much the same as it’s always been,” she says. “Having viral success from social media has been the hallmark of Paula’s Choice since we launched on the internet in 1995.” New platforms may come and go, but staying relevant has never been an issue for the skincare company. As Begoun explains, the brand’s enduring popularity comes down to one basic truth: “Our products work; they do what they say they will do, and in fact, often exceed expectations.”

The “truth” is a major point of emphasis for the founder, who famously started Paula’s Choice after she was fired from her cosmetics counter job for being honest with customers about what products could and couldn’t do. For Paula, maintaining that same commitment to honesty has never been a challenge—but watching her competitors disregard it has.

“[The challenge] that is most infuriating for me and my team is trying to combat the endless myths, misleading information, and inaccuracies repeated by so many in the beauty industry,” she shares. “The lies are frequently believed more than the truth is.”

There is only so much that topical products can do for skin at the end of the day, which is why the brand is committed to being upfront about the research behind their products, a trait that has helped earn their loyal fan base and likely speaks volumes to Gen Z.

“It’s easy to get waylaid by the pressure of what people want and launch products that contain the latest fads and trendy ingredients,” Begoun explains. “[It’s] even easier to distort information for the sake of selling a product, but that is an anathema to our company’s DNA. We have never strayed from that path.”

In other words, it should come as no surprise that the Skin Perfecting Liquid Exfoliant that’s going viral today is the same formula that launched back in 2000. Once you’ve established perfection, what is there to change?

As for what’s next for Paula’s Choice, both Begoun and Kussmann tell me their focus is staying true to their brand’s values (simple, effective formulas that work), while also connecting with their new Gen Z audience on TikTok and beyond. Part of that involves adapting to their customer’s demands—the brand launched in Sephora last year soon after they became a TikTok favorite, and the retailer quickly sold out of the Skin Perfecting Liquid Exfoliant within days.

However, as much as TikTok says that the brand’s hero product is liquid magic in a bottle, Begoun is quick to maintain that one product can’t do it all. Instead, she still recommends the delightfully minimal routine she first suggested to me a few years back: a gentle cleanser, a leave-on AHA or BHA exfoliant, an SPF of at least 30, a moisturizer, and a booster with a concentrated amount of a specialty ingredient aimed at your skin concerns (vitamin C, retinol, etc.).

As for the one piece of advice Begoun wants to give her new Gen Z fans? “The sooner you start taking the best care of your skin possible the better.”

“Lots of people say to me, I’m turning 30, or 40, or even 50, and I feel I should start doing something to take care of my skin,” she says. “And of course, they need to start, but the truth is they should have been taking brilliant care of their skin all along and not waited.” It turns out that the cliché I'd repeated to myself while I anxiously debated approaching a beauty legend with my deepest skincare qualms still rings true: there really is no time like the present.

This TikTok-Famous Mattifying Balm Is a Makeup Artist Favorite