Pat McGrath’s First Mascara Is Here, and We Tried It

It's not a stretch to use the word "legendary" when referring to makeup artist Pat McGrath. She is one of the most celebrated beauty experts in the biz, acting as the lead makeup artist to countless high-fashion runway shows and owner and creative director of her own namesake brand. She's even the go-to makeup authority for celebrities like Hailey Bieber... but that's all common knowledge to those who consider themselves beauty buffs.

What's not common knowledge, however, (at least not yet) is that the makeup mogul just released a brand new product. This time it's not a lip product or a highlighter—no, it's her first ever mascara, called the FetishEYES Mascara, and it's just as major as it sounds. You can trust us: we tried it out ahead of its launch. Keep scrolling to get all the details. 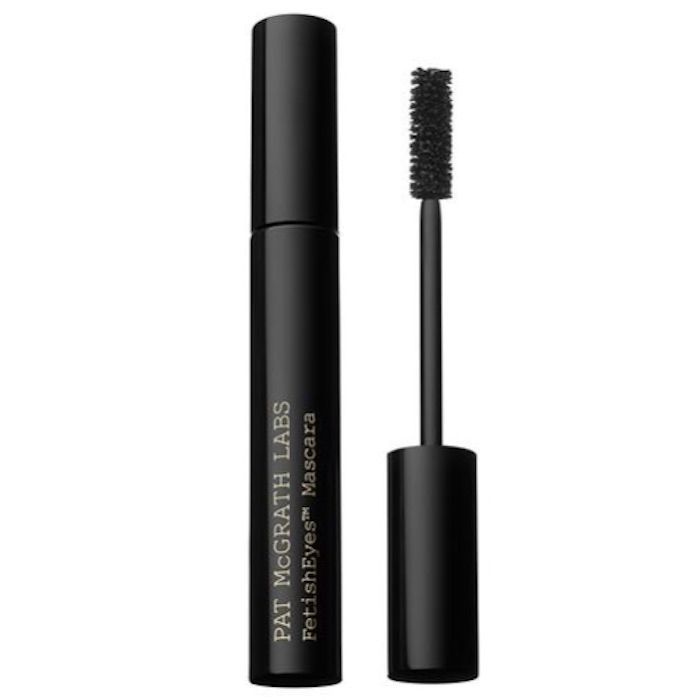 Here it is in all its glory. The mascara tube comes packaged in a sapphire blue holographic bag. Once outside of the bag, the tube itself looks much like other products belonging to the brand. It's housed in nondescript black packaging and labeled with computerized font. But, as always, it's what's inside that really matters.

Unlike other mascara brushes that are curved or tapered in order to achieve a specific effect, this brush has simple and no-nonsense dense bristles that are uniform in length and diameter. It's submerged in an inky black formula that, according to the brand, is meant to act as an all-in-one product, lengthening, volumizing, and lifting in a single stroke. The point of this mascara is to provide an end-all product that eliminates the need for buying multiple formulas for multiple lash effects.

Byrdie's senior editor, Hallie, tested the new mascara ahead of its Valentine's Day release. She had high expectations, but it lived up to them. "I didn’t know what to expect from a Pat mascara—would it be a huge, thick brush for massive volume or a thin wand for separation and length? As one of the most prolific artists in the game, I wasn’t sure which way it’d go. Turns out, it’s a bit of both. While the brush is tightly packed with thick bristles (and packs a punch when it comes to volume) it still lengthens really, really nicely. I was surprised by the texture (on the drier side), as McGrath just seems like a goopy, ‘70s, doe-eyed kind of gal, but was grateful for it. I wore it all night long through martinis and making out and it didn’t smudge, flake, or run once. Cheers to another home run from my absolute favorite icon."

Here it is in action at the Prada SS19 show, which is where it made its official debut. As you can see, the model's lashes are visibly darker, denser, and longer. Sure, it's not a particularly natural look, but this is Pat McGrath (and Prada) we're talking about, and if there's one thing we know about her it's that she loves dramatic and eye-catching makeup looks. And honestly, we think it's impressive that it can be layered so intensively without clumping up into a stiff, smudgy mess. Even though the model is wearing what looks like more than just a single coat, there's still definition and separation.

If you feel inclined to shop this new mascara, it's available now on Pat McGrath's website. In the meantime, check out 11 other mascaras Byrdie HQ tried and loved.