Party-Girl Fashion Is a State of Mind

“Happy Hour” author and bon vivant Marlowe Granados unpacks the eternal appeal of party-girl style and how to develop your own. 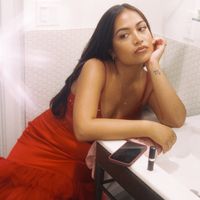 Marlowe Granados is the author of Happy Hour (Verso, 2021), a novel the New York Times called “confident, charismatic and alive to the pleasure of observation.”

You don’t necessarily have to be a party girl to have party-girl style—all you need is an endless appetite for glamour and fun. Personally, I’m seeing less of those very late nights, but that ethos lives on as I get older. I’m 30 now, and people are still surprised when I say I’m not attending something that everyone else is. But the party-girl lifestyle has never been about going to every event and gathering you’re invited to, as that’s an easy way to burn out. It’s bad for your skin and bad for your mood. A true party girl can go anywhere and make it an occasion—even if it’s just a picnic. It’s a state of mind, a true philosophy of life. It’s about being fearless in your pursuit of a laugh.

When I’m looking to channel women I admire, especially on nights out, the thing that unites all my fashion icons is the comfort with which they move. A true party girl must not be too constrained by her clothes—sometimes a strap falls off her shoulder or she hitches her skirt a little higher and her heels come off. And there should be a possibility for movement because you never know when you might have a little dance.

There’s nothing more party-girl style than the disco era of the 1970s, and Studio 54 represented all the glittery excess of the times. People were feeling loose and unbuttoned, but rather than looking unkempt, the clothes of the time were free, sensual, and deliciously louche. It’s no wonder that the club produced moments indelible to fashion history like Bianca Jagger riding in on a horse in an off-the-shoulder Halston dress and Grace Jones dancing the night away in a batwing violet bodysuit while bearing a little nipple. Clubbing clothes in the ’70s moved with the body, serving as an extension of it. Much like the period itself (and any true party girl), they’re uninhibited.

This was the same attitude Bob Mackie adopted when dressing Cher in the era. The designer took advantage of her statuesque canvas, creating cascading gowns and two-piece ensembles to complement her frame. One of my favorites is the dress she wore to the 1974 Met Gala—sheer, with strategic lines of sequins and beading to shield the more scandalous parts, along with feathered sleeves and hem. There’s an ease to how Cher’s clothes fall throughout the ’70s. Mackie later credited Cher with how well she carried his designs, no matter how grand. As he told Vogue in 2017, “She wore it like she was wearing a T-shirt and jeans.” There is nothing worse than an outfit swallowing its wearer. To dress with a party-girl mindset is to know that clothes are for living in and not just a photo opp, which is perhaps why we’re still so captivated by icons of the past even in the age of Instagram.

As far as fictional party girls go, there are two characters with sharp wit and even sharper style that we can all take inspiration from: Fran Drescher in The Nanny and Parker Posey in the 1995 film Party Girl. Both have a colorful fashion sense that is big on loud prints and miniskirts and paired with the most important party-girl element: a sense of humor. In fact, I would be hard-pressed to find one without an appreciation for a little absurdity or a taste for camp. There’s an inherent playfulness in party-girl fashion—one is never strict on fun when it comes to parties and clothes. On The Nanny, ’90s Moschino and Todd Oldham reigned, while one of my favorite looks from Party Girl is the opening shot where Posey wears a Vivienne Westwood corset with sparkly hot pants (which her character eventually ends up wearing to jail). From day to night, their outfits always have the character’s signature stamp—sometimes all it takes is a dramatic hat or a kitschy purse to bring a little party-girl personality to a look.

Cold weather doesn’t faze these party girls either. The minidress still gets worn by Drescher and Posey, but this time, it’s under a big shaggy coat. Their combined style (even if not your taste) will inspire you to be bold and lighthearted when it comes to dressing. There’s nothing more tragic than taking yourself (or your fashion choices) too seriously. As Cher is known to have said, “Until you’re ready to look foolish, you’ll never have the possibility of being great.”

When it comes to inspiration, I always advise people to form their own unique combination of references, sartorially or otherwise. Cast your net wide, across countries and decades, and look beyond what is in your direct line of sight. Today, it often feels like the same set of 20 people is deemed stylish, forcing us to re-create and recycle the same, narrow array of outfits in perpetuity. Staying up-to-date on what’s trendy is fine, but to carve out your own taste, your horizons must be broad. I think of all the women before me who led their lives with vivacity and sparkle. Yes, perhaps many of them had style, but what makes them timeless is their lack of fear. A true party girl has no qualms about pursuing what she finds pleasurable, despite the consequences.

The holidays give a reason for those who live outside of that philosophy to take a leaf out of the party girl’s book. It is the perfect excuse to give in to your desire to wear what, on other occasions, might be too much. In all that excitement, perhaps you’ll surprise yourself with how easily you live up to the role—and then who knows, maybe you’ll never give the party girl up.

The Going-Out Top Is Back—and Totally of the Moment