It might seem like a total beauty classic nowadays, but oddly enough, Nuxe's Huile Prodigiuese wasn't always this iconic and loved-the-world-over body care staple that we know it to be now.

In fact, back in 1992 when the founder Aliza Jabès first developed the formula in her small Parisian lab, French pharmacists laughed in her face. "It'll never work," they said (in French, obvs), and they mocked her efforts to put a luxury face on the natural skincare world. And the fact she thought anyone would want to slather themselves head to toe in a rich golden divine oil? Yeah, they thought that was pretty laughable too.

Still, Jabès stuck at it, and good job too, as fast-forward 25 years, and Huile Prodigiuese is now the best-selling all-purpose oil in France and is a mainstay on the UK's shelves too. It's so nourishing, you only need a little drop and suddenly frazzled hair becomes glossy again, dry shins are lacquered in an unbelievable sheen, and deflated cheeks look plump and almost juicy once more.

So how do you improve upon results like that? You make it richer of course. Enter Nuxe Huile Prodigieuse Riche ($46), a super-charged version of the cult oil that I've seemingly developed a minor addiction to. Scroll down to find out why. 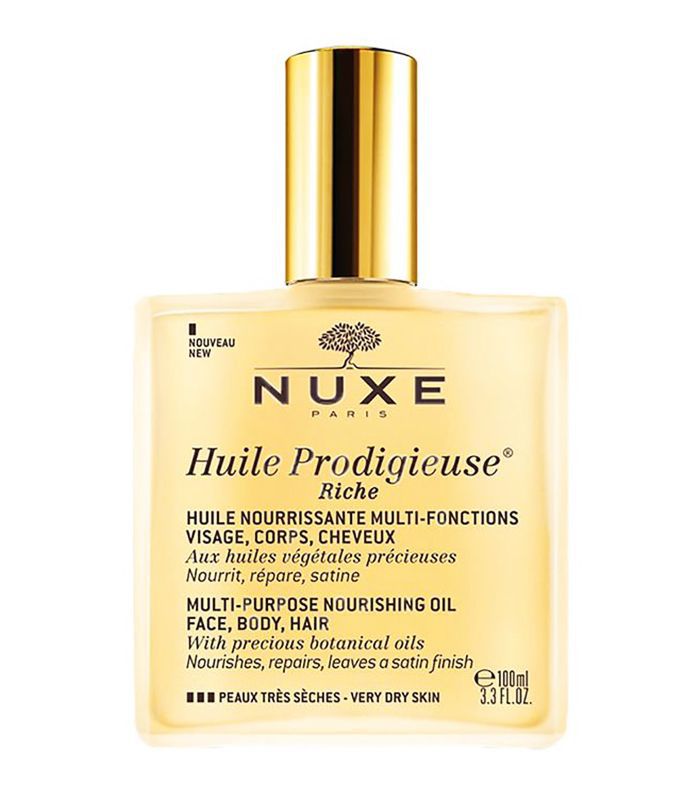 So what's the difference? Well, the most notable one—and the reason my legs seem to be clinging onto its hydration for way longer than usual—is the increase of macadamia oil, the nourishing ingredient at the centre of the formulation. Its composition is as close as you can get to sebum, meaning it mimics the skin's natural hydrators and is therefore more easily absorbed. The rich version has 30% more than the original, which is a pretty major increase that you can really feel on the skin.

There's also an extra ingredient you won't find on the bottle of the OG version: Tsubaki oil. This oil is made from the camellia flower and is really popular in Japan, where Geishas have used it in their skincare routines for centuries. In this body oil, it's just another great hydrator to add to the roll-call of nourishing ingredients.

The texture is slightly different too and feels much more aligned with more traditional oil formulas: There's none of that slightly weird viscous feeling you get with the dry version. That does mean that it sits on the skin a little longer, and so you might have to wait it out for a few more minutes before you try and slide your jeans up your moisturized legs, but it's worth it, I swear.

It's great on dry, split ends (although avoid the roots as it's pretty heavy going) and the only downside is that unless you have a super-flaky, dry complexion, it's probably best you avoid using this one on the face, as it might be a bit heavy and start to clog up pores. But in all honesty, I'm too busy slathering it up and down my limbs for my face to even get a look in.

Up next, don't look now but winter face is coming. Here's how to handle it.