You Should Think Twice Before Waxing Your Nose Hair—Here's Why

Medically reviewed by Dr. Geeta Yadav, MD
Geeta Yadav, MD is a board-certified dermatologist based in Toronto, Ontario, Canada. She earned her undergraduate degree at the University of Toronto, where later completed her residency.
ABOUT BYRDIE'S BEAUTY & WELLNESS BOARD
BOARD-CERTIFIED DERMATOLOGIST
Fact checked by
Anna Harris
Fact checked by Anna Harris
Anna Harris is an experienced fact-checker and researcher and a beauty writer and editor.
LEARN ABOUT BYRDIE'S EDITORIAL GUIDELINES

What To Expect During a Full Nose Wax What About a Partial Nose Wax?
Side Effects of Waxing Other Options for Nixing Nose Hair

Nose and nostril waxing isn't what most people want to talk about. The mere thought of getting hair from your nose pulled out from the root may send a shiver up your spine.

There are people out there who like to do just this because it lasts a long time. Unlike trimming or shaving, the hair usually stays away much longer. Waxing removes hair from the follicle, whereas trimming removes some length and shaving takes hair down to the same level as skin. But despite these advantages, there's a reason to keep some length: your nose hairs act as an air filter. Though it may not last as long, trimming is the better option.

The truth is that some salons and spas will do a nose wax, but others won't—even if they offer waxing services. You would need to call first and ask or browse a salon or spa menu to see if they specifically offer this.

What To Expect During a Full Nose Wax

Now, you may be wondering, "How in the world do you wax inside your nose?" For a full nose wax, hard wax is applied to the tip of a small wooden applicator in the shape of a ball and allowed to cool for some time. Then the tech will place the applicator inside the nostril, not going any farther than the ball of the nose for obvious safety reasons.

It's left inside longer than it would normally be allowed to sit on the skin, for say, a bikini wax. After a couple of minutes, the applicator is pulled out, hopefully taking the hair with it. People have said it doesn't hurt that much and is so much less painful than pulling nose hair out with tweezers. Ouch!

Personally, I wouldn't recommend waxing anywhere inside the body. Secondly, nose hair acts as an air filter. In this day and age, I can't imagine weakening this natural filter that we all need. You most definitely should not get a nose wax if you have asthma or are a smoker because filtering the air you're breathing may be even more important to your health. Also, it isn't safe to wax if you have a nose piercing.

If you want a full nose wax it's best to opt for a professional. Choose a reputable salon or spa and someone who is experienced and skilled in waxing.

What About a Partial Nose Wax?

Normally, this removes the hair at the edges of the nostril—therefore, it's not as invasive as a full nose wax, but still removes the hair that usually pokes out, bothering people the most. And because the product isn't going inside the nose, you can also sugar the hair. Sugaring is gentle on skin and some say it is less than painful than waxing.

Side Effects of Waxing

Keep in mind that with waxing there are often side effects like redness, some soreness, bumps and possible ingrown hairs that come later. The nostril area is a very delicate place and it's hard to see what exactly is going on with the skin inside. Having these side effects is often more annoying and painful in the nostrils, than say, your legs or underarms.

Other Options for Nixing Nose Hair

You don't need to wax... or let the hair poke out. A safer and less painful way is to trim the nose hair. Fortunately, there are trimmers and scissors specifically designed for this purpose. 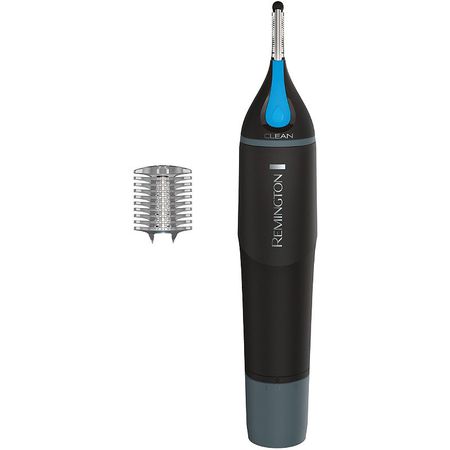 Remington Nose, Ear, and Detail Trimmer $9.00
Shop
How Hard Wax for Hair Removal Works
Article Sources
Byrdie takes every opportunity to use high-quality sources, including peer-reviewed studies, to support the facts within our articles. Read our editorial guidelines to learn more about how we keep our content accurate, reliable and trustworthy.