12 Exciting Designers You Need On Your Fashion Radar 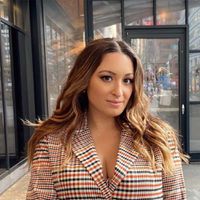 After years of working in fashion, the idea of hot “new” designers to know begins to feel a bit antiquated. In reality, many of the designers receiving such praise are far from new. They’ve spent decades dreaming, years planning, and countless hours working to make names for themselves. Even at a time when one video can make you go viral on TikTok, success still doesn’t happen overnight.

But that doesn’t mean these designers shouldn’t be celebrated; instead, we should acknowledge their perseverance and resiliency just as much as their creativity. Rather than dub them “new,” I’ll refer to them as (potentially) “new to you."

This list features many exciting designers on the rise, each working their way up and gaining prowess via their unique visions and concepts. Some, like Bethany Cordwell and Harris Reed, have already dressed major fashion icons like Beyoncé. Others, like Brandon Blackwood, have become known for one signature piece and are now proving how much more they’ve got to offer.

Each of these designers plays a notable role in shaping the future of fashion, and if they truly are new to you, it’s time to get them on your radar.

Nigerian designer Teni “Tia” Adeola launched her brand in 2017 while attending The New School, and her education is evident in her impactful designs. Her love for the Renaissance reimagined comes through via a perfect blend of intricacy and opulence, whether she’s designing a gown to show at New York Fashion Week or a frilly face mask mid-pandemic.

When stylists Marni Senofonte, Zerina Akers, and K.J. Moody spotted Australian designer Bethany Cordwell’s pieces on the @upnextdesigner Instagram account, they knew they’d found a perfect fit for Beyoncé’s next chapter. After the look appeared on the singer in British Vogue, Cordwell—a 2018 graduate of the Queensland University of Technology—saw her signature plastic fringe and trippy black-and-white bullseye shoot to fame.

Queens-bred Colin LoCascio made his debut in 2019 after working for Marc Jacobs, Vivienne Hu, and Kendall + Kylie. During New York Fashion Week in February, his A/W 22 presentation—for which he said The Nanny’s Fran Fine and other bridge-and-tunnel girls served as inspiration—was applauded for its playful use of color and texture, as seen on printed mesh and 3D knitwear. When he isn’t hard at work as Senior Ready-to-Wear Designer for Retrofête, his attention is on striking that perfect balance between nostalgic whimsy and Gen Z–approved edge.

Harris Reed only graduated from Central Saint Martins in 2020, but after nabbing the coveted role of Designer in Residence at The Standard Hotel in London, his demi-couture designs have appeared on everyone from Harry Styles to Iman to Lil Nas X. Reed’s gender fluidity and the rapidly evolving world of gender and sexuality politics have greatly inspired his work, and he describes his design aesthetic as “romanticism gone nonbinary."

Another Central Saint Martins grad, Albanian designer Nensi Dojaka launched her label in 2017. Dojaka went on to win the LVMH Prize for Young Designers in 2021, and her strappy-but-understated designs are an elevated take on ’90s minimalism and lingerie as daywear. Many of her cutout-heavy pieces have been spotted on celebrities like Bella Hadid, Sophie Turner, and Emma Watson.

Born in Vietnam, Peter Do moved from Philadelphia to New York City dead set on creating an old-school luxury fashion atelier—and impressively, did just that in 2018. Do’s penchant for impeccable tailoring and clean lines can, in part, be credited to time spent at Céline under Phoebe Philo, but his talent is all his and it’s landed his designs on celebrities like Zendaya, Beyoncé, and Billie Eilish.

You’ve heard of Brandon Blackwood’s viral End Systemic Racism Tote, and perhaps you’ve seen his Trunk bags in a myriad of colors and textures on Instagram. It’d be easy for Blackwood to remain relevant with this small handful of iconic pieces under his belt, but the Brooklyn designer—who began his eponymous brand in 2015—has shown that he has no plans of slowing down, arming his brand with a bevy of new handbag silhouettes along with shoes, outerwear, and other statement-making staples.

Danish designer Christian Juul Nielsen was no stranger to the fashion world when he founded Aknvas in 2019. He previously worked at Dior and Nina Ricci and he’s currently the creative director of Hervé Léger (you might’ve noticed the brand progressing beyond its signature bandage dresses for a cooler flair as of late). Since launching Aknvas, Nielsen has honed in on masterful knits and elevated daywear pieces.

Not all designers grow up dreaming of working in fashion. Kim Shui, for example, graduated from Duke in 2011 with a degree in economics. Fast-forward to her time at Parsons and Central Saint Martins, as well as some merchandising work at Rick Owens and Helmut Lang, and Shui has found her calling. Now you can catch her creating street style–friendly pieces, ranging from patterned maxi dresses to cheeky miniskirts, often with her unique spin on traditional Chinese imagery and symbolism.

You’ve likely seen Chet Lo’s designs dozens of times before without even realizing it. Lo’s textile play has sparked a new era of futuristic knitwear, and his signature spiky texture—reminiscent of the puckered popcorn shirts of the early aughts—has been spotted on trend-setting celebrities like Lizzo, Dua Lipa, and Kylie Jenner since Lo graduated from Central Saint Martins in 2020.

Often praised for his use of sustainably sourced fabrics and upcycled materials, Brooklyn-based Jamaican designer Edvin Thompson launched Theophilio in 2016 intent on creating a contemporary line like no other. The importance of cultural identity—especially as it pertains to Thompson as a Black, gay immigrant—is apparent in both the brand’s ethos and his designs, which made their NYFW debut during the S/S 22 season via a collection titled Air Jamaica.

Anifa Mvuemba launched Hanifa from her home in the DMV in 2011, but according to an interview with Teen Vogue, a bout of burnout in 2016 almost forced Mvuemba to shut down the brand for good. Persevering, she went on to host her debut runway show in 2021—at the National Portrait Gallery, no less. Celebrating the female form and excelling in colorful, creative luxury, Mvuemba’s body-hugging maxis and vibrant minis have been seen on celebrities like Megan Thee Stallion and Ashley Graham.

A Grown-Up Guide to Back-to-School Shopping