This $12 Natural Deodorant Is the Best One I've Ever Used

written by
Jenna Igneri
Jenna Igneri is a fashion and beauty creative. She was formally the fashion and beauty editor at NYLON, where she covered everything from the latest launches and trends to the brands championing sustainability, inclusivity, and diversity.
Byrdie's Editorial Guidelines
Jenna Igneri
Our editors independently research, test, and recommend the best products; you can learn more about our review process here. We may receive commissions on purchases made from our chosen links.

We put Native Deodorant to the test after receiving a complimentary sample from the brand. Keep reading for our full product review.

The past few years have seen the natural deodorant industry booming, with plenty of luxury and indie beauty brands putting their own spin on clean underarm care. Formulas have come a long way and are much more effective than they’ve been in the past, but they’ve also become pricier than your traditional deodorant and antiperspirant options. Thankfully, there still are affordable options out there that are as hyped up as their fancier counterparts, such as Native’s Deodorant.

Already a favorite amongst Byrdie editors, I took Native’s clean, aluminum-free deodorant for a spin. Over the course of 16 days—some of them being the hottest, sweatiest days of the year thus far—I put four of its classic scents to the test to see if they actually held up. Read on for my results.

About the brand: Personal care brand Native prides itself in creating products that are effective, clean, and cruelty-free. In addition to aluminum-free natural deodorants, the brand also offers clean toothpaste, body washes, and soaps at accessible price points.

About My Underarms: Sweaty but used to natural deodorants

As someone who’s been plagued with bad BO since puberty and has tried practically every deodorant and antiperspirant you can buy at a drugstore, it wasn’t until a few years ago, once I started writing about beauty, that I was introduced to natural deodorants.

After learning the potential health risks linked to the ingredients in traditional formulas—particularly aluminum—I made the switch to natural and clean formulations and began the detox process that comes along with it. Because natural deodorants don’t prevent you from sweating—and I still sweat a lot—I’m used to a little odor by the end of the day. Still, knowing I’m not applying any toxic ingredients to such a sensitive area makes sometimes smelling a bit iffy totally worth it.

In my experience as a beauty editor, I’ve tested every natural deodorant under the sun, yet I’ve only found a handful that actually work well for me. Two of those are products I’ve tested for Byrdie—Kopari’s Coconut Deodorant and Nécessaire’s The Deodorant—and my all-time favorite is Corpus’ The Botanist.

I incorporated Native’s Deodorant into my routine by applying once or twice a day as needed, either when waking up to start my day or after my post-workout shower. I tested it over the course of 16 days, trying four different scents for four days each. 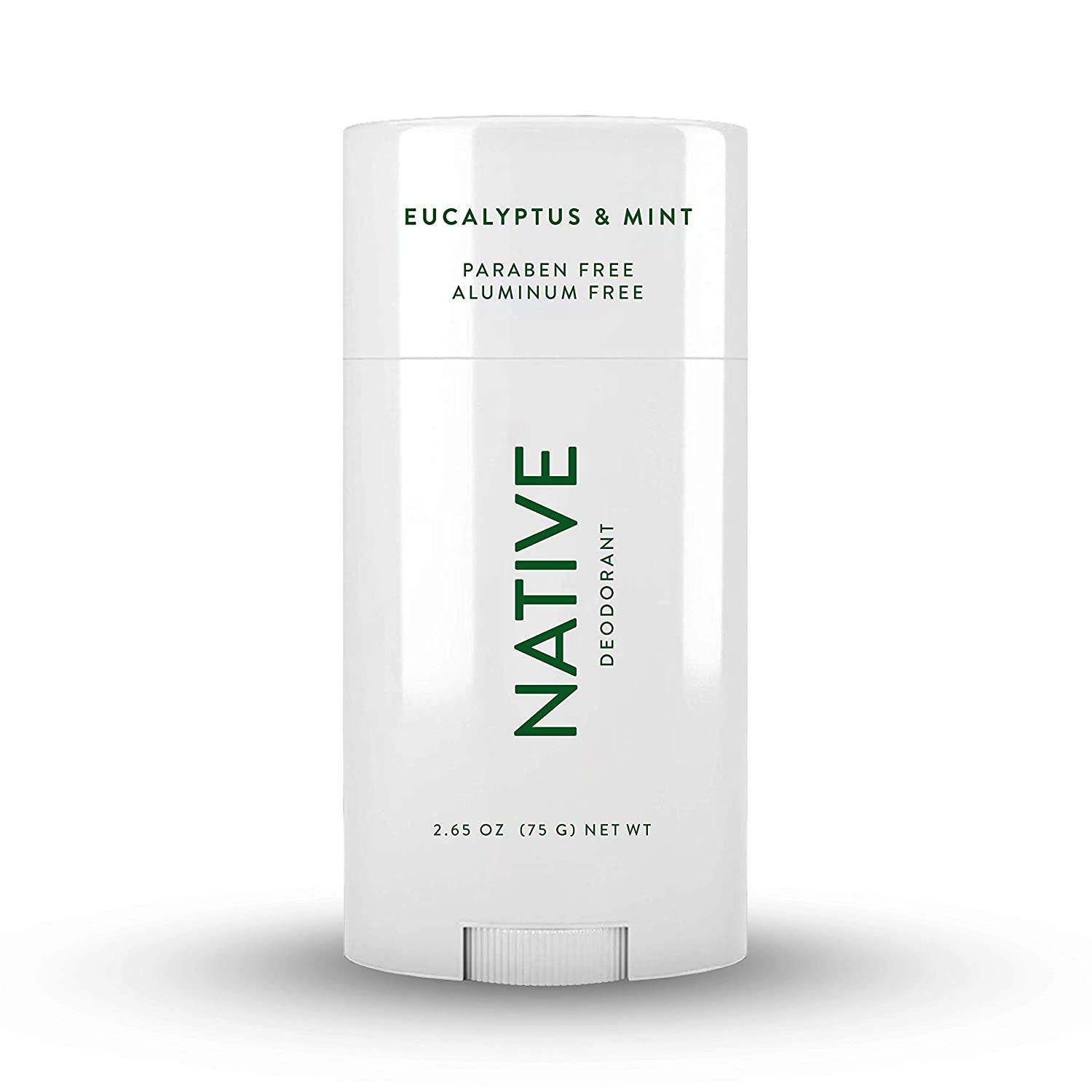 Ingredients: Formulated to fight odor and keep you dry

While Native doesn’t list any key active ingredients, this deodorant's deodorizing qualities come from three ingredients. Tapioca starch helps keep the underarms dry while both sodium bicarbonate (baking soda) and magnesium hydroxide neutralize odor-causing bacteria. They are listed as the second, fourth, and fifth ingredients respectively, indicating they are present in effective concentrations. Though listed as the last ingredient in all formulas, the product also contains lactobacillus acidophilus, a probiotic that helps maintain a healthy skin microbiome (thus helping to fight the “bad” odor-causing bacteria).

Other ingredients include coconut oil and shea butter, which are packed with antioxidants and skin-softening benefits, and cyclodextrin, a corn-derived, sugar-based ingredient that slowly releases a subtle scent throughout the day to ensure you stay smelling fresh. All of Native’s deodorants are vegan and free of aluminum, parabens, sulfates, and are considered clean by Byrdie’s standards.

The Scent: Something for everyone

Native Deodorant comes in a slew of scents, so I took four of its classics for a spin: Coconut & Vanilla, Eucalyptus & Mint, Charcoal, and Unscented, my favorite of the four being the Coconut & Vanilla. While I was half expecting it to smell like a Bath & Body Works body spray, it surprisingly isn’t sickeningly sweet—it’s strong, but it’s delicious. Native describes it as both sweet and sophisticated, and I have to agree.

The other three are much more subtle and suitable for those who don’t want to stress about pairing their perfume or cologne choice with their deodorant scents. Eucalyptus & Mint has a refreshing woodsy, herbal scent, while Charcoal has a “mineral” scent with light citrus undertones. Unscented smells like, well, nothing—which is great if you’re not into scented pits or are sensitive to fragranced body products. Despite it not having any added fragrance, it still neutralized BO as well as the others. All four have the same formulas aside from added charcoal powder to Charcoal and eucalyptus leaf oil to Eucalyptus & Mint.

Native has a number of scents for its women’s and men’s categories, but all four of these are considered unisex and are included in both. In addition to these, along with a few other classics, the brand also offers an array of seasonal scents, such as Rosé and Cactus Flower & Poppy.

The Feel: Light and hydrating

What I loved so much about this product—aside from it keeping me smelling good—is how weightless and light it feels. Some deodorants can be sticky or powdery, or even too wet, but this one glides on smooth with only a slightly oily (but hydrating!) clear residue left behind. If I applied it a bit heavy-handed, it sometimes left behind a bit of white residue, but nothing that was too noticeable or transferred onto my clothes.

I can honestly say Native’s Deodorant protects against odor better than any other natural product I’ve ever used. As I mentioned earlier, smelling a little rough by end of day is pretty much expected for me, but with Native, I only experienced that once or twice throughout the testing period, and that was after really intense activity, like a hilly bike ride on a really hot afternoon. On top of lasting through my usual day to day, it also survived multiple HIIT workouts, carrying heavy groceries for blocks, and a trek to and from the beach—and this was consistent throughout the testing period.

Since this product is a deodorant and not an antiperspirant, it’s not meant to prevent you from sweating. Instead, Native uses tapioca starch—a natural ingredient extracted from the cassava plant—to help absorb wetness, keeping you dry while still allowing your body to go through its natural perspiration process.

That said, it kept me dry for the most part throughout the day, aside from workouts or particularly hot days. I didn’t notice any change in wetness protection throughout the testing period; it was consistently pretty effective.

Natural deodorants can be irritating at first, whether you’ve just made the switch from antiperspirants or if you’re sensitive to baking soda, an ingredient found in many natural formulations. Having used natural products for years, I didn’t experience any irritation, even though I’ve reacted to baking soda in the past. In fact, I found all four to be incredibly soothing and hydrating.

If your underarms are particularly sensitive, there’s good news: The brand offers “sensitive” versions of many of its original scents that are free of baking soda and contain extra skin-soothing ingredients like vitamin E and jojoba esters.

The Packaging: A classic deodorant stick

Each deodorant is packaged as a classic deodorant twist-up stick in a plastic tube, allowing for easy, mess-free application. The brand also offers plastic-free containers, so you can opt for a less wasteful design if you wish.

This deodorant truly keeps odor at bay. The very first day I tried it (using the Charcoal version), I immediately put it to the test during my morning workout—a “yoga” video that ended up being a HIIT class in disguise. As I lay heaving on my mat, sweat dripping down my forehead into my eyeballs, I decided to take a whiff. Somehow, I still smelled really good?

Testing each scent for four days at a time, I had similar results with all. By the end of most days, I still smelled fresh—and not like fragrance mixed with BO. I was especially worried about the unscented version, as I usually rely on a bit of added fragrance to combat any funkiness, but even after a day spent biking around my neighborhood, there was no bad body odor to be smelled.

Only in one or two instances did it start to wear off by the end of the day, and that was after I was especially active or spent a lot of time outdoors in 80-plus degree weather. Still, my BO was subtle. On these days, I noticed that the product began to slightly clump in my armpit hair, but not in a way that was super noticeable or transferred onto my clothes.

Since I’ve been using natural deodorant for years, I didn’t notice any changes in efficacy (or any skin reactions) over the course of the testing period, since I’ve already gone through the detox process.

Compared to what some beauty products can cost you, deodorant is rarely an investment, but I still don’t feel great paying $20 or more for a clean formulation. Native’s Deodorants ring in at $12, slightly more expensive than drugstore versions but definitely more affordable than some other natural ones on the market. For a product that works and is completely clean, I think it’s truly a steal.

Kopari Coconut Deo: Before testing Native, I reviewed another natural deodorant for Byrdie, Kopari’s Coconut Deo. Both are clean, but while Native uses baking soda and magnesium hydroxide to neutralize odor, Kopari’s baking soda-free deodorant uses a combination of plant-based enzymes to break down odor-causing bacteria. Both have super soothing formulations, but Kopari’s blend of coconut water, coconut oil, and sage oil is like a drink of water for your pits and better suited for sensitive skin. Still, I prefer Native’s lightweight, barely-there texture over Kopari’s wet residue.

Native’s addition of tapioca starch helps combat wetness, while Kopari doesn’t offer any moisture-absorbing ingredients and can leave behind a very wet residue after application. Both deodorants work really well against odor, but from my experience, Native’s works slightly better (and for a lower price!).

Nécessaire The Deodorant: Another natural deodorant I had the opportunity to review is Nécessaire’s The Deodorant, which is also a completely clean option that omits the sometimes-irritating baking soda. Like Native, Nécessaire works similarly to combat both odor and wetness. Instead of baking soda, magnesium hydroxide, and tapioca starch, Nécessaire uses lactic and mandelic acids to neutralize odor-causing bacteria and silica, kaolin clay, and zinc to absorb perspiration. It’s also formulated as a paste that’s pushed through a special twist-up tube, which is easy to apply but heavier in texture and feel compared to Native.

While Nécessaire is another one of my favorites, and I’m absolutely in love with its sexy, herbal fragrance, but I can’t lie—Native definitely kept me smelling fresh for longer and through more active situations. Nécessaire is a solid option for every day, but if you think you’ll find yourself in an extra-sweaty situation, I would opt for Native to get the job done.

Our Verdict: The best affordable natural deodorant I’ve ever used

Simply put, Native Deodorant is one of the best natural deodorants out there. It effectively fought BO all day long, even in my sweatiest moments. And at just $12 a pop, it’s a total steal!

It's Official: These Are the Best Natural Deodorants Out There (For Real)