Naomi Ackie on the "Euphoric" Experience of Playing Whitney Houston 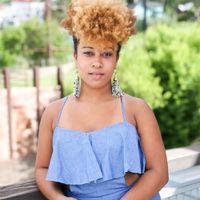 Faith Cummings
Faith is a journalist, copywriter, and editor. Her work has been published in The Cut, Vogue, ELLE, Harper's Bazaar, and more.
Byrdie's Editorial Guidelines

How do you capture the life of someone who means so much to many and, at the very least, something to pretty much all of us? Such is the quest for the Whitney Houston biopic I Wanna Dance With Somebody and its star Naomi Ackie. Executive-produced and written by Houston's estate and the record executive who signed her, Clive Davis, the pressure was on to get the highs and lows of the iconic singer's journey right.

"I feel a sense of relief," Ackie tells me over Zoom as she reflects on working on the film. "From the moment I got the part until now has been nearly two years. That's a long time to contemplate what to do with the project and how to handle people watching it. What did Erykah Badu say? 'I'm an artist, and I'm sensitive about my shit.'"

Playing Houston was an opportunity that immediately terrified Ackie with its magnitude. "I thought I shouldn't be trying out because it felt crazy big, and that was quite scary," she says. "My team told me I should give it a go. I started to understand the size of this project, and to be honest; it's never really sunk in fully."

Though the film's release may feel a bit overwhelming, Ackie is prepared to have people watch it. It's impossible to view her performance and not be overcome with emotion—not only because of the memories we all have of Houston but because Ackie does a damn good job helping us relive them.

So many elements made Houston a star, but given her moniker of "The Voice," it all starts there. "I can hold a tune, but I wouldn't ever call myself a singer or a musician because that's like sharing a part of your soul," Ackie says. She performed almost all of Houston's hits in the film, restaging some of her most iconic performances. "This pushed me out of my comfort zone because in the moments when I'm singing, people are there watching me, and I'm trying my best," she shares. "On the other hand, it was such a joy when I got to sing, and Whitney's voice was there."

When Ackie talks about Houston's voice being there to back her up on set, all she can do is laugh. "It's a real high, and you can kind of get carried away with it," she says. "It was euphoric for me, and I felt there was a lot of magic when I was protected by Whitney's voice. I tried to bring that into other areas of my performance when Whitney's voice wasn't there, and I had to do something for myself."

As a trained artist herself, Ackie developed a deep appreciation for Houston's talent while studying her epic performances, like her legendary rendition of The Star-Spangled Banner and her 1994 American Music Awards medley. "When you watch her performances over and over again, you start to see the reasoning behind the ways she danced or moved her hands," she says. "It all starts to culminate into someone who was an absolute master of their craft. We can call it a gift, and of course, it is, but there's so much she's doing in any given performance that you're not seeing if you aren't looking closely. It blows my mind, and it's something I hadn't seen before when I was just watching her for fun. There was no one like her."

Beyond her voice, Houston was an absolute fashion and beauty icon. As someone who equally loves style, Ackie recalls the costume and beauty elements of the film being among its most fun parts. "Most of the projects I've done have had one outfit all the way through, like Star Wars," she says. "This was about one hundred and twenty different looks. Some are real vintage archival pieces from different designers, and some were made for the film. We also had upwards of twenty wigs, and Brian [Badie, the film's hair department head] was cutting them on the day. He said, 'We have to get this right.'"

Ackie is in great company in the film alongside veteran actors Stanley Tucci who plays Clive Davis; Clarke Peters, who plays John Houston; and Tamara Tunie, who plays Cissy Houston. "What I loved about them all was that they held my hand through it because it's quite intimidating sometimes when you're around such performers," she says. "They gave me the space to play, and it's so gorgeous to watch actors who are so experienced be so at ease—there's a beauty to it. I started to fashion myself to how they were behaving. They have confidence in themselves because they've been doing it for so long."

That confidence helped Ackie take on some of Houston's darkest moments, including her struggle with drug addiction. How she takes care of herself through the lows of important roles like this one is something she's still learning how to do. "The older I get, the more sensitive I get," she admits. "Or I guess I'd say the more in touch with myself I'm getting because the feelings were always there, but I didn't have a name for them. I could throw away some of these heavier scenes more easily when I was younger. Whitney's story cut close to home, and there were a lot of parallels to my own life when I was playing her."

Once she finished filming I Wanna Dance With Somebody, Ackie eased into a six-month break before starting her next job. She immediately got back into her self-care routine again, which included hitting the gym for regular pilates sessions. She's also a fan of long, warm soaks in her tub and boundless walks with friends. "I like a pretty quiet and chill life, so I find joy in the little things," she says. "Filming is amazing, and talking about my work is amazing, but sometimes it pulls you away from the beauty of the ordinary. How gorgeous is a day when you have nothing to do, and you go for a walk by a canal, and that's the whole day?"

Though Ackie's star is burning brighter than ever, she likes these returns to normalcy because she never imagined a grandiose, Tinseltown-steeped life for herself. Her dad, however, was convinced she wanted to be an actor after a heartwarming instance as a toddler when she moved her body along with the intonations of a singer during church while sitting on his lap. Ackie says she was more drawn to stories and costumes than anything else as a child. "I loved anything that was a spectacle," she says while recalling some of her favorite childhood films like West Side Story and Sweet Charity. "As I got older, acting made me feel like I could step into someone else's shoes. Now, it's more of a reckoning with myself. I am looking more inward than outward."

Even outward appearance is a study in interiority for Ackie. Lately, she's been thinking a lot about how her fashion and beauty choices intersect with the pressures she puts on herself to represent her gender. "There's a femininity I've tried to hold onto because, as a Black woman, I feel like I'm not feminine enough sometimes," she admits. "With my fashion now, I like playing with the extremes. I like wearing extremely feminine and soft stuff, but I also like dressing slightly more androgynous. There's a freedom within that as I get to release myself from the pressure of filling any box."

Ackie deeply appreciates clothing construction, and one of her dreams is to go to an atelier and watch them bead garments by hand. She fondly remembers her first fashion show (Schiaparelli Couture)—she cried watching the clothes come down the runway because of the beauty on display. But she's being careful not to take fashion too seriously, so she can keep it as an enjoyable form of self-expression. "I don't want to be a certain kind of beautiful and assimilate," Ackie says. "But I'm still in the trying mode. I'm not there yet."

When it comes to hair and makeup, Ackie is equally enamored. When she's not working, she keeps her routine relatively basic, as it's essential for her hair and skin health. Her next experiment will be trying a short hairstyle, and she can't wait. But until then, she's game for just about anything. "I like it long, straight, curly, in a topknot—the possibilities are endless," she says. "It's a beautiful way to express yourself. There's no better feeling than when you have a new hairdo. It just screams, 'date me,' because everyone wants a piece."

Ackie has already completed her next project—she plays Frida in the Zoe Kravitz-directed movie Pussy Island. "Isn't it the coolest name?" she remarks after we both share a mutual love for the movie's title. "It's different with a Black woman at the helm, and there was something [special] about being directed by Kasi [Lemmons] and Zoe. There was an unspoken understanding about what was being asked of me, what they felt comfortable seeing in a scene, and how I would feel. There's a care in that and a real acknowledgment of how scary it sometimes is to be in front of the camera. Watching Zoe do her thing and being able to support that was huge. I know she can do anything, and I believe she will."

While she waits for Pussy Island's forthcoming release, Ackie will use 2023 to continue focusing on self-care. "I want to make sure that in this transitional phase in my life and career, I'm looking after myself," she says. "What's in my control is to be the healthiest I can be mentally and physically and be as happy as I can be. It's taken me thirty-one years to get there."