Pros + Cons The Bottom Line: Balanced skin The Feel + Scent: Refreshing The Ingredient: A special bacteria The Science: Does our skin need more bacteria?
Sensitivity: Try it first The Results: Smoother skin The Value: Pricey yet unique Similar Products: You have options Our Verdict: Worth an experiment

Between all the probiotic supplements and products taking up space in our fridge, word on the street is that bacteria is, in fact, good for you. That theory is finally reaching our bathroom cabinets.

You've probably heard of probiotic skincare, aimed to regulate the "good" bacteria on the skin's surface to balance skin and reduce breakouts. But Mother Dirt has taken it one step further and captured an actual live bacteria and bottled it up for us to spritz on to our faces in the AO+ Restorative Mist ($69).

Mother Dirt AO+ Restorative Mist balances and tones oily and combination skin types. It's also multipurpose and can be used on the body—customers love it equally for its ability to both reduce breakouts and deodorize sweaty underarms.

Best for: An oily t-zone or sweat-prone areas

About the brand: Mother Dirt's products contain active probiotics to address common skin concerns like breakouts, dryness, and redness. Its "secret ingredient" is ammonia-oxidizing bacteria, which was discovered by an MIT chemical engineer. 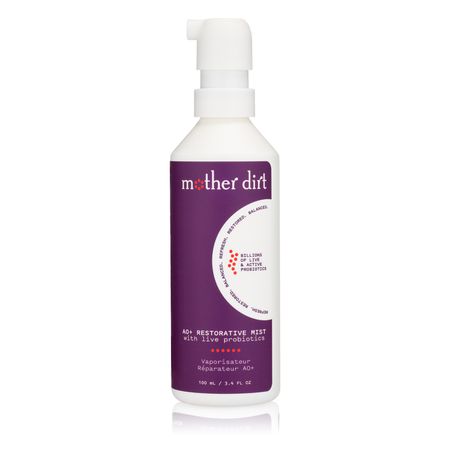 As every good skin mist should, this goes on feeling like a burst of fresh air. It's a light, super-fine mist—definitely not sticky or tacky at all. It has virtually no scent, and when used as a deodorant on the body, many reviewers claim it neutralizes the smell of their own sweat.

It's a pretty anticlimactic experience when you think that you're applying living cultures to your face. But that makes it fit even more seamlessly into your routine. It doesn't feel like anything out of the ordinary at all.

The Ingredient: A special bacteria

Nitrosomonas eutropha: A bacterium that, when applied topically to the skin, is believed to improve its clarity, smoothness, and appearance. Devotees swear by its ability to naturally deodorize while respecting skin's microbiome. A 2019 study also suggests it may reduce the appearance of wrinkles.

Rachel Nazarian, MD, of Schweiger Dermatology Group confirmed that nitrosomonas eutropha has been shown to benefit the skin when used topically because the oxidization that occurs produces nitric oxide.

"Nitric oxide is an essential part of skin's environment and function, and can be used to improve the inflammatory condition of the skin," explains Nazarian, adding that it could potentially be used to treat certain inflammatory skin conditions and even as an anti-aging tool as well.

Because the AO+ Restorative Mist contains active bacteria, it's best kept refrigerated and will last in the fridge for six months. If left at room temperature, it can lose its potency.

The Science: Does our skin need more bacteria?

Okay, so let's take it from the top. Isn't the stuff we already harbor enough? As I found out in possibly one of the most fascinating conversations of my life, the answer is no.

"If you think about how we human beings used to live, we were much more immersed in the natural world. We would walk barefoot and probably swim in lakes and streams. We hadn’t separated the outdoors to the degree we have today," explains Mother Dirt cofounder Jasmina Aganovic. "Fast-forward to today, two to three generations later, and we don't spend anywhere near as much time outdoors, plus we've become obsessed with sterility and the whole lather-rinse-repeat mechanism."

Jasmina Aganovic is a chemical and biological engineer and cofounder of Mother Dirt bacteria-based skincare. She is also an entrepreneur in residence at Ginkgo Bioworks, Inc. and is based in Cambridge, Massachusetts.

It doesn't sound like a big deal, does it? Well, it turns out, the absence of this bacteria is throwing our skin off balance and leaving our microbiome (the ecosystem living on its surface) vulnerable to aggressors.

But it's not just our skin's radiance at stake here. As Aganovic notes, research shows a correlation between a jeopardized skin microbiome and a weakened immune system. "The ecosystem on your skin is your body's eyes and ears to the external environment," she explains. "As we try to get rid of that bacteria, effectively what we are doing is potentially deafening and blinding that line of communication. It doesn’t know what’s going on, so it has no option but to go into fight mode. And that, we believe, is why we have so many inflammatory issues."

Once applied, the live bacteria within the mist get to work rebalancing the skin's microbiome. "Sweating is a detoxification mechanism for your body during which some irritating components in your skin raise the pH level of your skin, causing things like odor," explains Aganovic. "This bacteria removes those things by eating them and converting them back into very good compounds for the skin. It's like a recycling process on the skin. In doing that, it's getting the pH down to a much better level for the skin and has a rebalancing effect."

While it doesn't stop sweating like an antiperspirant, it's this effect on sweat that has some customers already ditching the deodorant. "This mist is more in line with the body's natural biology than traditional deodorant and antiperspirant because it simply removes the components that the odor bacteria feed off of, rather than killing all (good and bad) bacteria," says Aganovic.

Nazarian agreed, with one caveat: "I can’t speak to the neutralizing of odors, but probiotics can be used to rebalance the natural skin flora and have a healthier skin surface bacteria environment," Nazarian says.

"But even normal bacteria may produce an odor when mixed with sweat," she adds.

Likewise, I wouldn't go as far as to say I'll be giving up my beloved deodorant. But many other reviewers state their sweat smelled less pungent than usual, backing up the mist's neutralizing effects.

Though I didn't experience any redness or irritation, you should always try a patch test or use caution if you have particularly sensitive skin. Some online reviewers said it irritated their dry, sensitive skin. But most users with oily or combination skin give this product positive reviews, saying it calms their acne breakouts and reduces excess oil.

While I wouldn't go as far as to say I'll be giving up my beloved deodorant, I do think my skin is much clearer over time and rarely gets blotchy.

Your Caudalie Beauty Elixir needn't worry; this won't take the place of a traditional toner-style face mist in your regimen. I used this spray as the very last step after my skincare and makeup were applied.

I do think my skin is much clearer over time and rarely gets blotchy. It also kept oiliness at bay, and my skin felt smooth after each use.

The Value: Pricey yet unique

I won't sugarcoat it: $69 for 3.4 oz is expensive. Many face mists cost less than half, though there are few products like this out there. If you seek a remedy for blotchy or oily skin and have tried it all—or you're just really curious about putting bacteria on your face—you might consider shelling out for this. Otherwise, you can find many hydrating face mists at lower price points.

Youth to the People Adaptogen Soothe + Hydrate Activated Mist: It's significantly cheaper—$42 for 4 oz—and hydrates and calms redness. The main ingredients are not bacteria-based but a cocktail of adaptogens: ashwagandha, rhodiola, and reishi, plus hydrating shea butter, peptides, and hyaluronic acid.

Murad Prebiotic 3-in-1 MultiMist: At around $32 for 3.4 oz, it's less than half the price of Mother Dirt's mist. Used to prime skin for makeup and balance skin, this multitasking product contains prebiotics and peptides to replenish moisture.

Our Verdict: Worth an experiment

It's certainly a neat premise, adding more bacteria to balance the existing bacteria on your face, absorbing grease and sweat, and leading to a clearer complexion. And my skin certainly was soothed by it. But other less expensive products have also calmed and cleared my skin, and I'm not 100 percent sold on skipping deodorant.

If you're seeking a unique skin solution and have tried it all, it's worth taking a look.