Molly Bernard on Positive Queer Representation and the Magic of Retinoids

Plus, what she’s learned from her Younger co-star Sutton Foster. 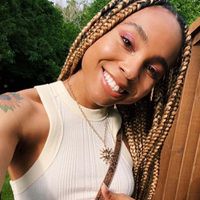 Eva Reign
Eva is a writer, actor, and graphic designer based in New York. She has contributed to Them, Vogue, The Cut, and more.
Byrdie's Editorial Guidelines

For seven seasons on the hit dramedy Younger, Molly Bernard’s queer, Jewish, and audacious character Lauren Heller has had countless bizarre yet loveable moments. On her first day in 2015, Lauren rips off her top in the middle of New York’s Bryant Park for Topless Tuesday. It was noon, an open set, and many eyes were on Bernard during their numerous takes. But, like Lauren, Bernard was unbothered. "I was like, 'This is who she is, and it’s okay!' It’s okay to have your boobs out in the middle of the day in the middle of Manhattan."

What began as a small part for the pilot evolved into Bernard’s first series-regular role. She booked it after graduating from the Yale School of Drama and embarked on six years of wild antics alongside her co-stars Sutton Foster, Hilary Duff, and Nico Tortorella. From publicity schemes to unhinged parties, Lauren Heller has become the backbone of Younger. "She’s the subversive girl we all need," Bernard says. As the Paramount+ series comes to a close, Bernard is saying goodbye to the brazen media maven but reflects upon her character’s impact.

"Lauren’s queer story is aspirational in that it’s not traumatic," she says. In contrast to tragic queer narratives that long dominated the media landscape—from Brokeback Mountain to The Crying Game—Younger helped pave the way positive, uplifting, and affirming representation. Bernard finds it pertinent for a character like Lauren to exist.

"It’s something I’m most proud of in playing her. [I'm] proud of our showrunner Darren Star and our writers’ room," she says. "It’s important to see there is an out, proud, and awesome queer person living a great life, not struggling with her sexuality." Ahead of the series' conclusion, Bernard opens up about the makeup tips she’s picked up along the way, her queer journey, and her dreams.

Since starting Younger, how has your relationship with makeup changed?

Oh my goodness. When I started the show, I didn’t have a clue. I [wore] a ton of mascara and blush and lipstick—that was all I knew how to do. But, my makeup artist Megan Lanoux has taught me that skin is the way to go. Now, when I do makeup, I either just do [base makeup] and a hint of mascara. Or, if my skin is looking good, I will do a bold lip and brush my brows. She said one time, and I’ll never forget this, "If you have 10 minutes to do someone’s makeup and they’re going to walk the red carpet, just make sure their skin looks good."

I’m working on it these days. [I use] iS Clinical's Cleansing Complex ($44), which I love. If I’m shooting or I’ve had a long day of press or wearing stage makeup, I use Epicuren's Silk Radiance 3-in-1 ($65). It's a cleansing oil and it is unbelievable. Then, I tone and use a retinoid. I use a prescription retinoid three times a week. Retinoids are truly a heroic feat in science. I love the vaccine and I love retinoids.

At the beginning of quarantine, I had the worst breakout of my life. I was so sad, but then I got a retinoid, and now I swear by it. It means that I have to do a lot of moisturizing because it will dry out your skin. So, I use many different things to try and figure out what works best. Right now, I’m using one from Farmacy. Tata Harper is great because I love clean beauty. Sometimes I use La Roche-Posay, and that’s the best.

I love the vaccine and I love retinoids.

What are some of your favorite makeup products right now?

I have my makeup bag right in front of me because I touched up right before I saw you. I just went to Sephora and picked up the new Gucci lipstick. I'm a sucker for their packaging, so I bought it, but it’s actually really good. My very favorite product right now is the only thing I’m using on my face. It's Kosas' Tinted Face Oil ($42). It’s perfect for life, and I can make it work in front of the camera if I use Charlotte Tillbry's Airbrush Flawless Finish Setting Powder  ($45), which I just think is the best powder. She also makes this incredible blush that’s very dewy and light. Ilia's Limitless Lash Mascara ($28) is the best mascara on the market. I am obsessed. It is life-changing.

I Tried The Tinted Oil Foundation Everyone Is Talking About

Also, Jones Road makes this thing called The Face Pencil ($25). It’s essentially a blurring stick. I use it just for concealer if my eyes are looking funny. It’s sheer, and it looks like you’re not wearing any makeup. It’s incredible. They make a lot of different shades too. I mean, I’m the color of veins. I’m a ghost. [Laughs]. One time, my best friend Vicky and I were walking in Prospect Park years ago, and the guy, all of a sudden, screamed, "Damn, those motherfuckers got no color. Pale ugly ghosts!"

The last thing I’ll mention is another tip my makeup artist taught me: applying powder. I used to apply powder with a big, thick brush, but Megan told me to get a thin, flat foundation brush to apply the powder and press it on rather than swipe. That application looks so much sheerer, and I don’t look cakey. At the same time, I am not shiny in the spots where I don’t want to be.

Growing up, you were a big Sutton Foster fan. What has your experience been working alongside her these past few years?

It was amazing. She’s always so prepared. She shows up knowing her lines as well as everyone else's lines. That's that Broadway training, honey! And she's just effervescent. She taught me how to crochet, so now I have a lifelong skill, and I will probably do it on every set I ever go to. There were so many days where she was such a force of good. One day, she said to me, "You're working too hard. You don't have to stress out as much. It's okay. Don't forget; we have editors too." She knew that I had just graduated from Yale when I booked Younger, so she was helpful with me transposing theater onto the screen. There is a learning curve. She's a mentor of mine. I've never actually realized that until now, but I do think she mentored me.

What was it like going to Yale’s drama program? And would you say that comedy is something that you’ve always gravitated toward?

Auditioning for Yale is a multi-step process. It’s crazy. By the end of one of my callbacks, I remember saying to the two co-chairs of Yale, "You guys, I could probably not go to Yale and have a character doing what I just did." So I did a very funny monologue for my audition, and then I did a dramatic Shakespeare monologue. I said to the co-chairs, "You can see the difference there. I’m fine in the drama situation, but I’m not an idiot. I excel. I’m funny, quirky, and cute, and I’m small. So even if my career begins that way, that’d be fine. I don’t hate that, but I’m a human being capable of a lot more, and I need your help in training. Sure, I’m edgy, but I have dreams of being a full-character actor. Character actors are special because they can do comedy, and they can do drama.”

Your upcoming film Milkwater explores surrogacy and queer themes. What should audiences expect?

The film beautifully explores how difficult and vulnerable it is for queer families to begin. The same would even be true for straight people who can't conceive on their own and need a surrogate. It's extremely vulnerable to have your child in someone else's body, and you have little to no agency. It's so intense. [Milkwater] also explores the psychology of the surrogate herself from her vulnerability, her need, her own family, and her sordid family history. As we all do in all of our relationships, she is trying to solve her unresolved trauma. She’s trying to resolve it through this particular person and the event of conceiving this child and being the surrogate. That's the nuance of the film. In short, this film fucking beautifully captures the surrogate's journey and the parent's journey. It approaches both with a ton of compassion and empathy. Both of these characters feel real. It's an unbiased, very nonjudgmental film.

With the vaccine being distributed more and more, the pandemic isn’t impeding quite as much on Pride Month celebrations. What are you most excited about during this time?

I am so excited for pride. I love Pride Month. I definitely hope we have an in-person pride this year. I'll probably still wear a mask because I'm not totally on board with what the CDC has done. It feels too early. I want to see some good drag shows. I miss in-person. I miss that energy. Hannah and I, my partner, will definitely go to the Dyke March. We love the Dyke March. A couple of years ago, I went with my mom. I come from a chosen family, too. I have two moms who adopted me later in life. One of the best moments of my life was my first pride ever with Hannah. It was me, her, and my moms together, screaming and cheering at the Dyke March. It was like, "Ah!" [Screams]. If I ever write my own film one day, that moment must be in there because it's so specific. It's so niche. My heart was just exploding.

Sutton Foster on Returning to Broadway and Embracing Aging