The Façade of Millennial Wellness Keeps Me Silent about Depression

Hustle culture comes at a price. 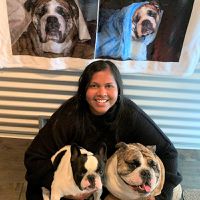 Depression has always been the cinder block to my anxiety-filled Mylar balloon. From the time I started school, I could rely on anxiety to push me to the outer limits of productivity. As long as I kept moving, I wouldn’t sink to the murky depths of my mind. This isn’t exactly true, but when it came to depression, anything was better than feeling worthless all the time.

I had my first bout with depression in high school. My best friend and I had been drifting apart for months. I was miserable, but I felt relieved knowing I didn’t have to explain myself or account for my whereabouts after school. At lunch, I’d be sitting at a table flanked by girls talking about Britney Spears and whether they should shave their pubes into a heart or a landing strip. Somewhere between my locker and gym class, I felt the light dim along with my ability to feel joy.

When I was seven, my dad died suddenly of a heart attack. I had never felt so grown-up. Much like my childhood, my teenage years ended abruptly. This time, I was 17, watching dementia rob my grandmother of her memory and personality. I tried to distract myself with school, studying to the point of skipping meals and losing sleep. The more I worked, the more I convinced myself that this was the only way to deserve rest.

"Depressed people have the stigma of looking unenthusiastic, unmotivated, and lazy, like they just don’t try hard enough or simply don’t care,” explains Veronique Mertes, HPD, clinical hypnotherapist and psychotherapist. “It’s not a ‘look’ that works well in our society."

When I was in university, my friends and I were close-lipped about our struggles. From the outside, it seemed like we were endlessly hustling but always thriving. We called other people brave for being open about depression while internalized stigma kept us from revealing too much of ourselves. We surrendered to insomnia under weighted blankets and the glow of light-therapy lamps. We traded up likes and follows for wedding invites and sought-after internships.

It was as if we had bought into the facade of millennial wellness, gratitude journaling our way to enlightenment and monetizing our interests as side hustles. Exhaustion was a small price to pay if the alternative was admitting that our work/life balance wasn’t fully actualized.

Despite the stigma surrounding depression, there’s actually a reason for it. According to Mertes, “our brain creates depression (and anxiety) on purpose to protect us. It makes us low in energy and stops us from wanting to socialize so we stay put and preserve energy."

Depression is like a storm drain, silently collecting the traumas of the past and present, ready to overflow when life becomes too overwhelming.

We called other people brave for being open about depression while internalized stigma kept us from revealing too much of ourselves.

If depression is a storm drain, then hustle culture is everything at eye level that needs our immediate attention. Hustle culture keeps our eyes trained on the horizon, insisting that we prioritize our careers above everything else. It fuels our addiction to work, promising us the four-day workweek, our dream job, Instagram-worthy adventures, and nirvana during lunchtime Pilates. It’s reminiscent of the unmitigated #GirlBoss advice we hear from the likes of Kim Kardashian.

Working to excess "can also be a way of filling an emptiness,” says Mertes. “We get a dopamine rush each time we achieve something and we get a serotonin rush each time we’re better than someone else. Those neurotransmitters are very important for our happiness and mental health and they can become quite addictive."

With hustle culture, inching closer to the horizon seldom gives us clarity about what we want to achieve. “It can seem like success will somehow make everything better, but in reality, things will get harder,” says Saira Jan, senior psychological wellbeing practitioner at Living Well Consortium. So we keep working to avoid looking at what’s pooling in the drain.

Hustle culture does come at a price though. Among young adults, depression has been on the rise since the mid-2000s, attributed in part to less sleep and more time on social media. A study in the Journal of Applied Biobehavioral Research found that millennials were more likely to be depressed if they engaged in social comparison (i.e., regarding others as doing better than them), rarely posted photos of themselves with other people, and worried about being tagged in unflattering photos.

Mertes points to the increased pressure on millennials, having grown up with social media as a “babysitter or constant companion.” She says, “their view of the world will have been shaped not only by family and school life but by a constant ‘film’ rolling alongside, filtering out real and normal life for the sake of must-haves and must-dos."

During our teens, we seek approval from our peers, conforming to certain norms and rebelling against others. Sometimes we just want to blend in. According to Mertes, the result is that teenagers “lose themselves in the ‘crowd’ before they’ve even found themselves."

Jan agrees that social media encourages social comparison, making it difficult to envision who we want to be. “On social media, you’ll see people quitting their jobs, taking risks, traveling the world, and being financially free by 30,” says Jan. “Owning your own company is not as easy as it looks online. As a business owner, you’re the person who’s responsible for all aspects of the company, and very rarely will you get to switch off on the weekends like you would when you’re working a nine-to-five. Not all of us want that."

Through my own journey, I’ve seen depression from the vantage point of being a client and a therapist. It’s helped me see where the facade is wearing thin. In a culture that glorifies working to excess, depression isn’t the villain but instead the embodiment of our aspirations and our efforts to survive the murky depths. While we can’t escape depression by overworking (I’ve tried), there are strategies we can use to develop a healthier relationship with hustle culture and reduce the stigma around mental illness.

How to Cope With a Sudden Onset of Anxiety
Article Sources
Byrdie takes every opportunity to use high-quality sources, including peer-reviewed studies, to support the facts within our articles. Read our editorial guidelines to learn more about how we keep our content accurate, reliable and trustworthy.