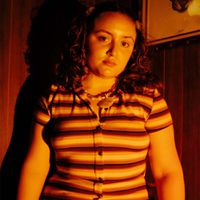 Tess Garcia
Tess is a freelance journalist. Her work has been featured in publications including InStyle, Entertainment Weekly, Teen Vogue, and Refinery29.
Byrdie's Editorial Guidelines

If you’ve reached the fashion side of TikTok, you’ve seen it: A seemingly innocuous product is emblazoned with a head-turning message about mental health. It often incorporates dark humor and could take the form of anything from an anxiety-themed tote to a hoodie that reads “Bitch, I’m in Therapy.” There’s no official name for the phenomenon, but we’ll call it “honest mental health merch.” In recent months, it’s evolved from an internet microtrend to a widely recognized movement.

“I think it goes with the Instagram trend of self-care memes and people feeling like the memes speak to them in some way,” says Jessi Gold, MD, MS, a psychiatrist at the Washington University School of Medicine in St. Louis. “And then it became a thing where people are like, ‘I might as well use my body to tell everyone the same things I would tell them on social media.’”

Like the Instagram self-care trend, there’s no cut-and-dry definition for what constitutes honest mental health merchandise. That room for interpretation has allowed brands to address a variety of topics in unique ways. Take Apt C3, the label behind the aforementioned “Bitch, I’m in Therapy” apparel. Its founder, Detroit- and New England–based entrepreneur Charlie G., created it in 2020 after years of wrestling with anxiety and depression.

“Going back to 2017, I was in an incident that caused me to seek therapy,” she explains. “As the year went on, I made progress, but I was still regressing from time to time because I’m human.”

G.’s complex relationship with therapy led her to the brand’s signature catchphrase. “A lot of people think the slogan means ‘I’m in therapy and I’m proud,’ but it really means ‘Give me grace. I’m not there yet, but I’m working on it,’” she says. “The idea came, [and I was like], OK, let me put it on a T-shirt.”

Others have used honest mental health merch to address the needs of a specific community. Texas-based brand JZD created its Feel Your Feelings collection with the Latinx diaspora in mind. Standout pieces include the Aurora Tee, which reads “Llorar es Cool” (Spanish for “crying is cool”), and the Brillando Sweatshirt, which features the phrase “Ayer Llorando, Hoy Brillando” (“yesterday crying, today shining”). Like G., cofounders and wives Jennifer Serrano and Veronica Vasquez looked to their personal struggles when designing it.

“From a young age, I learned to deal with life through jokes, as anybody who has to go through tough things would try to,” Vasquez recalls. “Most of this [collection] is Jen telling me, ‘It’s OK, you’ve already cried. You let it out, and it’s going to be alright.’ I think that’s what we wanted to do with this collection, to let you know that it’s OK to feel your feelings. As long as you pick yourself up and keep on going, you’re fine.”

It’s easy to wonder whether the trend is a response to the hyper-positive merch of the 2010s (RIP to the “Rosé All Day” graphic tee). But according to Gold, it probably has more to do with the state of our world.

“I don’t know if people want to wear a shirt that says they’re happy all the time right now,” she says. “I couldn’t tell you about anyone who hasn’t had their life somehow changed (probably negatively) for some period as a result of the pandemic. This merch could be a response to that as much as it is a response to not resonating with hyper-positivity.”

Since the pandemic began, authenticity has taken center stage on social media and in everyday life. Celebrities have increasingly shown their vulnerable sides—who could forget when Keke Palmer opened up about her PCOS diagnosis? Meanwhile, new platforms like BeReal encourage millions to broadcast spontaneous, mundane moments. With every passing day, our culture is growing less interested in the unattainable standards that once guided every form of self-expression. According to a recent survey from consumer research firm GWI, 42 percent of Gen Z participants felt people should show more of their “real” selves on social media.

“I think people started to realize it was more heartwarming to be real and share the struggles we face,” Serrano explains. “I think that’s why so many brands are talking about these hard conversations that, especially in the Latino community, aren’t spoken about as much.”

G. believes customers buy her clothes in hopes of sparking constructive discussions. “I feel like people resonate with Apt C3 because everyone has some type of mental issues, but it’s been so taboo to publicize it, to say, ‘I deal with this too,’” she explains. “It gives people an opportunity to be authentic and honest with things that we closet and deal with by ourselves. This is something that, with attention brought to it, can find a better resolution.”

If the past few years have made one thing clear, it’s that you can’t advocate for a cause by simply wearing a T-shirt. As positive as its intentions might be, Gold can see how mental health merch can enter the realm of performative activism. “If your brand is going to market mental health, it’d be nice if profits also went, in some capacity, to support mental health causes. I think that gives it an extra edge, so I’d be able to defend wearing it if anyone asked me,” she suggests.

G. hopes to address those concerns in a genuine way. Apt C3 is currently working with therapists to develop no-cost programs in their communities. “This is not just a for-profit company that makes great merch,” she says. “The price is what it is because we plan to take some of the proceeds and give it back to the community through funding therapy sessions.”

When you consider that JZD’s profits go to its queer Latina founders—one immigrant and one first-generation American—who share their traumas to uplift others, it’s hard to view the brand as anything but authentic.

“I know there’s someone right now who’s doubting whether they need to be here. JZD should be an example that shows you can do it,” Vasquez says. “You can get out of that dark spot if you work at it and try to get all the help you can possibly get. I mean, look at me now. We’re sold at Target, I’m getting all the help I need, and things are looking up for me.”

A sweatsuit discussing therapy may not seem revolutionary, but it could be a small step toward preventing the devastating outcomes of untreated mental illness. “It’s kind of like sex,” G. explains. “People don’t like to talk about it, but if you have healthy conversations, you can prevent the spread of STIs and unplanned pregnancies. Hiding these types of issues and keeping them a secret is what causes the things we’re trying so desperately to avoid.”

Like most stories worth telling, there will always be someone who views mental health merch as making light of serious conditions. But according to Gold, that doesn’t mean it’s not worth creating. “I think it’s just being mindful of the fact that you could further stigmatize mental health with your word choices and that some people could be hurt by what you’re doing, even if you’re coming at it with the best intentions,” she says.

Still, the impact of brands JZD and Apt C3 cannot be overstated. “Ultimately, it sparks conversation and normalizes the words in people’s vernacular,” says Gold. “It makes it less awkward for people who are really struggling.”

12 Exciting Designers You Need On Your Fashion Radar