As beauty editors, we get bombarded with a ton of new products every day (we know—tough life). Reviewed is a series where we report on some of the best products we’ve tried. Whether it’s a drugstore lipstick that lasted all day or a hand cream that saved us this winter, you'll find all our favorites in this column. Enjoy!

Everyone has that one facial feature that they tend to fixate on (that’s assuming Angelina Jolie has off days just like the rest of us). Mine has always been my brows—or rather, my lack of brows. That is, until I discovered Maybelline TattooStudio Brow Tint Pen.

I grew an unhealthy attachment to The Brow Gal Skinny Eyebrow Pencil ($23), which, in my opinion, is still the best brow pencil out there if you’re not naturally brow-endowed. One time, I got a blowout where the well-meaning hairstylist rinsed off part of my filled-in brow during my shampoo and I almost cried. I was obsessed with thick, fluffy brows, even more so because I didn’t naturally possess them.

Then, I started getting my eyebrows microbladed, and my life officially changed for the better. Now, instead of spending 10 minutes in front of the mirror shaping, filling in, and brushing up my brows, I could just add a swipe of tinted brow gel (Benefit Gimme Brow, $24, is my go-to) and go about my day. It saved me so much time, and my anxiety over going out in public without filling in my brows decreased exponentially.

Alas, microblading is not a permanent procedure, and recently, I’ve noticed the tint on my brows has faded considerably to the point where it’s barely noticeable. I still only use tinted brow gel, but I’ve had to use much more of it to sculpt defined brows than in the past; the other day, I even reached for a skinny brow pencil to fill in sparse areas, which brought on flashbacks of my pre-microblading days and was very disturbing. The thing about microblading, however, is that it’s pretty painful (picture a tiny blade scraping your brow area repeatedly), so I’ve been putting off my appointment. That is until a skinny, unassuming brow pen landed on my desk from Maybelline. I had heard the buzz about this product and was intrigued by the tip—unlike other brow pens (which never work for me), the end of this pen was divided into four tiny prongs instead of one felt tip. Meet: Maybelline TattooStudio Brow Tint Pen.

Maybelline TattooStudio Brow Tint Pen has a genius four-pronged tip that instantly defines and fills in brows for a microbladed look at home. For just $10, it deserves a spot in your makeup bag.

Best for: Defining and filling in brows

About the brand: Maybelline is one of the most well-known makeup brands founded in New York City. They offer high-performance makeup products that are fast and easy to apply. 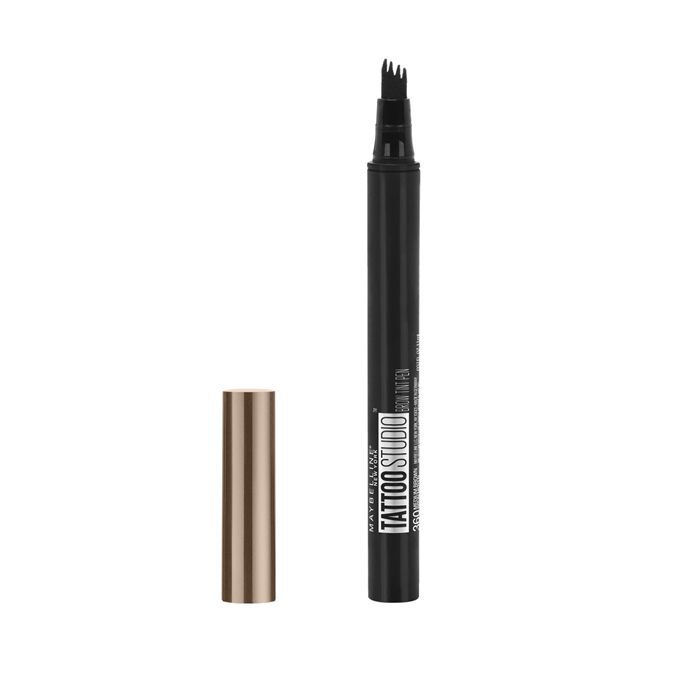 About My Skin: Nonexistent eyebrows

For the first 21 years of my life, I breezed through seemingly unaware of the fact that my natural brows were completely nonexistent. It wasn’t until I started working in beauty that I realized what a huge difference a perfectly defined arch can make. After that, there was no going back. I tried every brow product on the market, painstakingly filling in my sparse arches every morning with the end goal being some type of Lily Collins effect (but usually very, very far off).

How to Apply: The pen does the work for you

Intrigued, I tried the pen immediately—and was blown away. The unique tip creates tiny strokes that look like real brow hairs. I wiggled it into the base of my brows hairs anywhere I felt like I wanted more definition.

Most importantly, I couldn’t believe how easy it was to use. Most brow pens have a watery formula that just doesn’t work for my brows; they either barely show up or look like I filled in my brows with a colored marker (scary). Either way, it’s not cute, and this has made me permanently swear off any sort of brow pen… until now.

Flip the tip of the pen so that it's horizontal and then drawing hair-liked strokes upward. It makes the final effect look so much more realistic.

This version from Maybelline has a stiff tip and surprisingly pigmented color payoff that lets you layer for intensity. I use it like a brow pencil, applying short strokes along my brows. The whole process took all of 15 seconds, compared to the 15 minutes I used to take every morning pre-microblading. After applying this product, my brows were pleasantly shaped, defined, and filled in. I'm definitely satisfied with this brow product and how my brows look after using it, unlike a lot of other products I've tried.

The Value: Can't beat it

This pen is an inexpensive beauty product to add to your beauty brow routine. As opposed to microblading, this small brow tint pen yields quick, easy, and pain-free brow results. It's also an affordable option.

Sephora Microblade Effect Brow Pen: This Sephora brow pen has microblading in the name, offering to give similar results. For $12, it leaves brows looking full and defined.

Brow Bar Microblade Pen: Another microblade pen, this one is $24, is available in three different shades and is waterproof. It's lightweight and defines brows to your liking.

Nothing excites me more than innovative beauty products such as these (especially ones that allow me to be lazier in my own routine), and this Maybelline pen has thoroughly impressed me with its unique applicator and dummy-proof existence. I was going to set up a microblading appointment this week, but after trying this product, I'm holding off. My only wish? That this product existed years ago. Who knows? I might never have made that initial appointment.

These Are Not Your Average Brow Products—They're Way Better