This YouTuber Is Erasing the Stigma Around Male Pattern Hair Loss 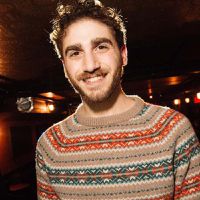 Ian Goldstein
Ian Goldstein is a digital producer at Byrdie. He has also been a writer, reporter and editor with over eight years of experience working across various brands.
Byrdie's Editorial Guidelines

Harry James, a 30-year-old YouTuber based in the U.K. is changing balding men’s lives. The vlogger has amassed over 120,000 subscribers on YouTube, with videos that range from Harry sharing how he overcame fears of losing his own hair to ones that show a plethora of young men expressing how they’re coping with balding.

It’s called Baldcafe and the channel wants to alter the narrative around balding. Losing one’s hair can often feel isolating and can sometimes trigger an identity crisis. Though going bald is not a life-threatening condition—and often serves as a punchline—it is a condition that can cause great distress to the people who experience it.

Androgenetic alopecia, also known as male or female-pattern baldness, is a genetic condition often resulting in the loss of hair on the front and top of the head. According to double board-certified facial plastic and hair surgeon Gary Linkov of City Facial Plastics, it is the most common type of hair loss for men and women. “It has to do with the effect of androgens on the hair in areas that are sensitive to androgens, specifically DHT (Dihydrotestosterone),” Linkov says. “It's more genetic in nature. No one truly knows if it's the mother's side or father's side [that causes it]. It's genetic in origin, but definitely influenced by the environment, stresses, and potentially different medications.” Likov adds that 40% of men under the age of 40 will experience balding, and by 60, that number rises to 80%.

While there’s no cure for androgenetic alopecia, there are medications like Finasteride (brand name Propecia) and Minoxidil (brand name Rogaine) that offer some support for those attempting to preserve their locks. “Hair transplants are another option for certain people with relatively stable hair loss looking to significantly restore an area of the scalp,” Linkov says. “It involves permanently moving hairs (that are typically more resistant to androgens) from one part of the scalp to another.” But transplants can often be quite costly and not everyone is a candidate for the surgery.

Though losing hair might motivate some to fight the balding process, there are also many who embrace the look—not only celebrities like Michael Jordan and The Rock, but Regular Joes on YouTube. The YouTubers post videos of themselves shaving their heads hoping to provide a catharsis for those with alopecia; it’s a freeing move forward into their new look, proving that one doesn’t need hair to be happy.

On Baldcafe, nobody is mocked, everyone is welcome, and those who act on removing whatever thinning follicles remain are given virtual hugs from YouTube commenters. It’s almost a pay-it-forward approach for bald men; each story that’s added to the collection of videos provides a new opportunity for someone who's stressed about balding to see someone who conquered it.

I spoke with Harry on why he started the channel, how he personally coped with losing his hair, and how he’s getting so many people to embrace going bald.

Why did you start Baldcafe?

I was reviewing these apps [on YouTube] to try and build an audience. Then I saw this ad on Instagram for an app where you could Photoshop yourself. They would get a guy who was in great physical shape. And then they'd reverse-Photoshop him so he'd look like he had [gained weight]. And they would take the [weight gain] away and replace it with abs that he clearly already had. It would show someone bald, and then they put nice hair on him. As soon as I saw it, I immediately linked it to how I felt when my hair first started falling out. When I was balding, I was looking at all of these products, all these narratives everywhere that were like, "Losing your hair is terrible. You need to fix this at all costs." And that built up on me. I was talking about the app [on my YouTube channel]. I hadn't planned to talk about my story of going bald, but it was obviously in there just waiting to come out. Halfway through doing this app review, I was just like, "This is bullshit. Please don't ever download anything like this or feel like you need to change yourself to fit these image standards.” For the first time since reviewing like, 55 apps, I got more than one comment. People were like "Dude, thank you so much for talking about [balding]. I've been worried about it." I thought, There's something here. I need to talk about this more. I felt good getting it off my chest and I felt even better knowing that it had the potential to help someone else.

How did you cope with balding?

At 25, I was so ashamed and embarrassed about having a bald spot on the back of my head. I would walk around anxious that someone was going to call me out on it. I developed all these strange safety behaviors of constantly styling my hair a certain way or checking it all the time. I would get my phone out almost every evening and take progress pictures to track how bad it was getting. I'd sit in my university lectures and if someone was laughing or talking behind my back, my first thought was, They've seen it. I would show up like, 20 minutes late to class so that I had no choice but to sit at the back.

I'd now done something that I was so afraid to do. I was the thing that I always had feared so much.

And then I finally was like, Wow I can't even look people in the eye anymore. I was like, I can't do this anymore. I sought counsel and spoke to a colleague. She just listened to what I had to say and I just laid it out—I was like, I feel so shit about myself because my hair's falling out. That conversation allowed me to start to figure it out. Is the problem really how I look or is it about the way I think and feel about myself? I knew that for me, getting surgery [or taking medication] wouldn't change how I felt because that wasn't the problem. It wasn't about how much hair I had. It was a body image issue. It was a self-esteem issue. I was asking myself, Am I really that reliant on hair to feel good about myself? But it took me to get to that low point to really recognize that, so I just decided that I'm just going to commit. I'm going to be the guy who has no hair.

How did you feel when you first shaved your head?

I first took a gradual approach. A zero [clipper guard size] on the side and a one on the top. It looked terrible. And I was like, Okay, well that isn't the answer. I've got to just go all in here. And then I [shaved it all] and literally had nothing on my head anymore. And I was just like, There isn't a bald spot anymore. There's nothing to try and cover up. I'm totally exposed. It was like shock exposure. I had no way to hide this. Nothing happened. No one looked at me any differently. No one cared. And I was just like, Maybe this is fine. I felt so proud of myself that I had gone through with it. What it did is it changed the way I looked at myself. Before that, I was looking at myself being in tears, like, you're not a real man. [Shaving] totally changed my perception of myself and my body image. I'd now done something that I was so afraid to do. I was the thing that I always had feared so much, and I was out there in the world not hiding, and it felt great to finally get out of that hole that I had been in for a long time.

What's your stance on medications, transplants, and hair systems?

I refer to them as necessary evils. I don't think they're the solutions that they're marketed as, but for some people they're necessary steps. There was a guy on my channel who wore this hair system for 15 years. It was a classic case of someone balding [and it] hit really hard. It took him 15 years to get so exhausted with the hair system that he was like, I just can't do this anymore. I've got to accept that I've lost my hair. And that's okay. As soon as he did that, when he let go of that baggage, it was amazing.

Is the problem really how I look or is it about the way I think and feel about myself?

What advice do you give guys after they take the leap and shave it off?

I say, “When you do it, don't wear a hat. Get out there. Go sit down in a coffee shop and be uncomfortable for a bit. It's not going to be easy. It's not going to be nice. But you're there for 10 minutes and no one's coming up to you and screaming in your face about how ugly you are. Do another 10 minutes. No one's staring. It’s all underwhelming.”

It's great that you're covering the mental health aspect of balding.

This is such a psychological thing. One’s appearance is really just a small part of the problem. The problem is, Why has it crushed me so hard? Why do I suddenly feel worthless just because of that one thing? You know, it just isn't real. But psychologically that's where it kind of takes you. I wanted to make it as relatable as possible. The channel grew into this community and I was able to help guys navigate the journey, who then in turn wanted to give something back by sharing their own stories and it just grew and grew.

Where do you see the channel going?

I had the goal of wanting to share 100 people's stories on the channel. I always envisioned the channel was like a bookcase, and when you come to the channel when you're the [viewer] who's losing your hair, you can pick the guy that you can relate to the most and maybe he will be the one that helps a light go on and you just stop looking at yourself so terribly; you give yourself some credit finally and change that narrative in your head.

You’re sort of like a therapist to the viewers who reach out to you.

I just listen because that conversation I had with my colleague [when I was going bald] was probably the number one thing that helped me figure it out for myself. For the guys that get in touch with me, I say to them, “You have everything you need to navigate this journey—everything you need you already have, you just need to be pointed in the right direction.” And one of the best ways that you can figure it all out is if you have someone that's going to hear you out and let you finally get it all off your chest, out of your head.

The Byrdie Boy Guide to Caring for a Bald Head