How Makeup Got Me Through Grad School 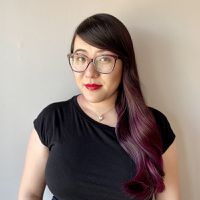 Lucia Tang
Lucia Tang has been a freelance writer since 2019, covering beauty, sports, and books, among other topics. Since 2019, her work has appeared in Electric Literature, FanSided, JSTOR Daily, and the Los Angeles Review of Books, among other places. She started contributing to Byrdie in 2020.
Byrdie's Editorial Guidelines

A Princeton professor revered for her pioneering work in feminist criticism, Showalter has written on everything from sexual anarchy to Victorian hysteria. Among her less-cited works, though, there’s a three-page essay, bare of footnotes, that sticks in my head like the cling of a heavy perfume. It was published in Vogue.

Printed in neat double columns in 1997’s December issue, “The Professor Wore Prada” takes us through Showalter’s illustrious “career of literature and lipstick”, from the articles she authored to the Revlon tubes she stockpiled along the way. There’s one line, in particular, that I can’t stop thinking about. Showalter says, “I can remember what I wore to my Ph.D. orals (little white Courrèges boots) as well as the questions I aced.”

I’m not an English literature person at all: I actually work on premodern China. But my research deals with women and books—women reading books, and writing them, and written into them, contorted into strange didactic shapes by the authorial inclinations of men. And so I’ve read a fair amount of Showalter. Her Vogue piece, though, remains my favorite thing she’s written.

When I encountered that essay for the first time, I was in the middle of studying for my own orals—four years of graduate coursework culminating in a single, high-pressure exam. I spent that whole semester reading a dense, thickly annotated book a day, writing neurotic, thousand-word summaries late into the night. I lived off salt-laced microwaved steaks from a company called, misleadingly, Freshly, and scarfed down the occasional Kind bar purloined from my partner’s office.

By the week of my exam, I had two hundred pages of notes. My skin, too, looked marked by angry marginalia: white-tipped pimples dotted my cheeks, forehead, and chin as if every argument I’d dissected had imprinted itself onto my face.

I’m four years out from “acing” my own orals now, and unlike Showalter, I don’t remember a single question I was asked. I don’t remember the shoes I wore—something far less glamorous, I’m sure, than Courrèges. Or which sheath dress I zipped, with shaking fingers, over the sheen of nervous sweat slicked along my spine. What I do remember is the makeup.

Later that day, after my examiners congratulated me and my advisor sent me home with a celebratory bottle of Scotch, I posted this on Facebook:

Luctor et Emergo was Latin for “I struggle and emerge,” I noted in a comment—my go-to scent for all things difficult and important, that flip from dread to triumph the moment that you’re done with them. Instead of a full stop, I capped off my sentence off with a lipstick emoji.

The truth is, the whole shape of my graduate career, in memory, looks less like a syllabus than a Sephora cart. Of course, I’ve studied hard. But for the most part, I remember the makeup I wore more than the books I read—certainly more than the papers I wrote. My doctoral program taught me how to parse difficult sources, how to shape prose according to the standards of historical argumentation. But while I was learning to think like a scholar, I also taught myself how to use makeup with confidence that felt rigorous, even linguistic. Through the luxuriant vocabulary of matte and gloss, I marked up my face with meaning, like a historian annotating a text. Under the soft and waxy press of my lipstick tubes, my ineloquent flesh became a surface dense with intention.

Before I bought Perfect Score—a blood-red spell, cast in pigment, for a good exam—my go-to lip color was Chanel Pirate. I wore that silky, cool-toned red to every conference talk I gave, bringing the same high-shine black tube of it to London, Ann Arbor, LA. I favored ink-blue lips for library work. And when I wrote at night, I smeared my mouth with gray or taupe until I had the lips of a statue, taut from the strain of teasing insight out of opaque texts. I let my forehead go slick with grease, but I’d pause every few hours to reapply those slate-cool tones—they rubbed off so easily onto the rims of my Starbucks DoubleShots.

My approach to makeup was like note-taking: not a way of reaching for beauty, but a method for inscribing knowledge onto my skin. I once showed up to office hours to discuss the “jade-like countenances” attributed to pre-Qin sages, with shiny yellow-green smeared across my cheeks.

My approach to makeup was like note-taking: not a way of reaching for beauty, but a method for inscribing knowledge onto my skin.

In one of the early Chinese texts I study, people—women, but also sages and kings—“adorn” themselves in virtue instead of powder and silk. This was another insight I tried to translate into a face of the day, or rather, of a season. The semester I took my orals, I stopped wearing makeup. Not all at once: first I forewent powder, then highlighter, then blush, removing one layer of artifice per week. In the last few months before my exam, I met with my committee members with my skin lusterless and bare, my acne stark as the tiny numerals on an endnote.

My bare face was a visual shorthand for how hard I’d been working, as intentional and effortful as a cheekbone contour. It was makeup, if makeup isn't material or technique but occasion: a face made legible like a premodern monarch's virtue, to be looked at in a certain way, at a certain time.

But on the day of my exam, I put it all back on. I struggled and emerged. And I got my Perfect Score.