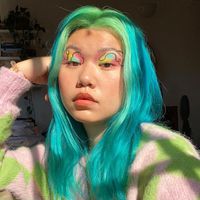 Mi-Anne Chan
Mi-Anne is a writer and content creator based in New York. She’s currently the Director of Creative Development for Teen Vogue, them., and LOVE Magazine. Prior to her role at Condé Nast, she was a beauty editor and on-camera host at Refinery29.
Byrdie's Editorial Guidelines

You know what’s hard? Accurately articulating the sheer batshittery of this year without using catch-all phrases like “I don’t know, I just feel anxious” (which is both not descriptive and a little defeatist).

Sometimes, it’s easier to show rather than tell. Such is the sentiment of a handful of makeup artists on Instagram. Lately, they’ve started breaking free of outside influence—shifting away from rules that outline how makeup is meant to be “pretty” and “practical.” They cover their faces in gems, paints, and the occasional leaf picked from the garden. To them, makeup isn’t about conforming to what’s “wearable,” it’s about stepping out of the grid and into something that’s engaging, inspiring, and even political. In the process, they’ve created a special place for hoards of underserved people looking for a visual outlet that doesn’t include five-color smoky eyes and Ardell Demi Wispies.

We asked four artists to choose a single day in a two week period and create a makeup look based on how they felt waking up that morning. The results were all over the map, but there’s a few things each artist had in common: They all used makeup to lift their spirits and to express something that couldn’t quite be put into words.

Ali might be the most confident 19 year-old I’ve ever met. “I knew who I wanted to be when I was eight years old,” she says over Zoom, sitting cross-legged on her bed. “I knew I wanted to be bold, be in the beauty industry... I knew I’d make a difference."

Ali’s makeup style is colorful, busy, and a little macabre. She doesn’t shy away from colors you “might not think look good together” or picking up real leaves and flowers off the ground to glue to her face.

"This look made me feel so high-tech,” she says of her creation. “The lines reminded me of the inside of software, like the first Apple MacBook computers but only cooler.” The hero products were Pat McGrath’s Star Wars Palette on the eyes and two shades of Glisten Cosmetic’s Wet Liners to create the purple and green flames. “[I'm self-isolating] and I’m doing makeup, so I’m thinking about how I can make it over-the-top,” she says. "How can I make it new, fun, and exciting—but still make it me?”

Ali sees makeup as a challenge, not just in the technical sense, but in her desire to incorporate artistry and beauty into conversations about racial justice. In June, Ali painted “arrest the cops that killed Breonna Taylor” in big, bold letters across her face. She was met with praise, but also vitriol. “Some people thought the Breonna Taylor look was disrespectful,” she explains. “But that is my art medium. It’s the same as someone painting a burning cop car or making songs about politics. We see it as [acceptable] because it’s music and we know music. This is my form of protest. I owe it to people and to myself."

Tania Kwok, like most of her early-20-something brethren, is a multi-hyphenate. She’s double-majoring in biological sciences and physiology and whips up full-face makeup masterpieces regularly. "I was honestly not in the best mood the day I did this look,” she tells me over Zoom. She’s got a host of assignments coming down the pike and is understandably feeling stressed. "Everything was a bit complicated in my head, so I thought I’d go back to my roots." By roots she meant graphic liner and simple, yet decisive strokes of color—the things she’s become known for over the past few years while sharing her work with the internet.

She starts every look on her iPad, illustrating colorful lines over a selfie of her bare face. It’s her version of a makeup artist’s paper face chart, modified for 2020. This bit of extra pre-production makes it easier for her to plan out intricate shapes. “In the beginning, I was hesitant to call it art because I dropped out of art in high school,” she says. “But this is my outlet for art. Doing makeup is much more rewarding than painting because it’s so much more natural to me. I think it looks better on a face than on a canvas.”

With this look, Kwok was going for “regal.” In true, 18th century Romanticism fashion, she went heavy on the blush. The blue lines were courtesy of Glisten Cosmetics' Wet Liner in Sapphire. The thing that ties it all together though, is a handful of carefully-placed pearls. “I didn’t want to risk convoluting the look with gold or silver metallic shadows so I thought, 'What’s always a good thing to fall back on? Dollar-store pearls.' I thought I’d jazz it up a bit."

She did her makeup at 10 p.m. that day, which according to Kwok is pretty common in her household if the mood to paint strikes. “I didn’t want to add any more stress to my plate but I wanted this look to make me feel some type of way—beyond what I’m feeling in the real world,” she explains. “I wanted to feel a bit glamorous.”

For Myla, makeup is a big part of creating a mood. It’s one facet along with clothing and scent that can help her shape-shift into a truer version of herself. In the beginning, makeup helped her unlock a more confident alter ego, but over time, she began to embody it. “When I make art, I feel myself again. At first it was a mask of confidence, but it’s manifested into reality and this is who I am now.”

Her looks come in waves. “My queerness comes into play and she’s the one in charge,” she explains. “As soon as I commit to creating a look the vision starts popping into my mind. I just know what I need to do to my hair and what accessories to wear.”

The look in question was born on a surprisingly calm day in late October. In true quarantine fashion, she woke up feeling good, but couldn’t quite figure out why since admittedly, "nothing really happened the day before." She ran with it though, and decided to tap into her inner child by pulling out a new cow-print sweater vest from her closet. “This look represents how much of a softie I am. I’m very sensitive.”

Myla started by brushing some neutral brown shadows onto her lids from Morphe's Maddie Ziegler palette, then added cow-print shapes with some black liner. But a Myla look—which often calls upon funky shapes and bold swipes of color—wouldn’t be complete without a pop-art style border. She finished off the eyes with red and white liquid liner.

"Lately I’ve been feeling really good,” she says, almost surprised. “I mean, it’s kind of like I’m ignoring everything right now because there’s so much going on, but I’m trying to focus on the positive and not the 'what ifs.' This whole month I’ve been reflecting on how far I’ve come."

May's work manages to feel current and nostalgic—all at the same time. It’s Euphoria meets Clare’s and for her, it ties deeply to mental health. “I’ll have days where I just don’t want to do anything but I know that makeup will make me feel less stressed so I get up and do it,” she says over the phone. "That’s how much makeup is therapy for me."

She takes a lot of inspiration from desi culture, but finds it particularly stimulating to subvert the narrative. “Desi makeup is very problematic,” she begins. “If you think about desi wedding makeup, it’s all about making yourself lighter, making yourself look as white as possible, and avoiding bright colors anywhere but the lips.” She incorporates bindis into her work often—not to reclaim it necessarily, but to show that you can be a desi girl in your own way. “There was a phase when white girls would go to festivals and wear bindis, sure, but I really want to show the desi community that we don’t have to go the normal route of desi makeup,” she explains. “I think if there are more desi girls embracing their natural skin and all the hairs on their face, it would be a more accepting community."

To that end, May Tahmina rarely wears foundation, opting instead for a touch of concealer so that her natural skin can peek through. “My head’s absolutely scrambled here, there, and everywhere. I just woke up and felt like shit,” she says of the day she created her look. But the sun started coming out and she knew that taking photos of her work during golden hour would send a positive jolt through her system.

She pulled out her favorite turtleneck and used it as inspiration for her eyes. The vibe was “butterfly fairy” so she grabbed some colorful liners and started drawing. She finished off the eyes by carefully dotting teeny crystals onto the butterfly wings and brushing up her brow hairs with Elmer’s Glue on spoolie. “I know it sounds stupid, but when your outfit matches your makeup it makes you feel so good,” she says. “Feeling good about yourself, it’s the best feeling ever. You can’t compare that to anything."