Mascara is undeniably one of the most transformational makeup products out there. In polls on can't-live-without-it products, it routinely tops out at number one (after all, there aren't many other options that can make you look more awake with a single swipe). But, as is so often the case with especially metamorphic products, there can sometimes be a bit of a tradeoff. Volumizing formulas can leave flakes and fallout, lengthening mascaras and their fine-toothed wands can be irritating or difficult to layer, and impression-leaving color options can find themselves migrating far lower than the actual lash line. Then, of course, there's the matter of combining all those factors into one bulletproof formula that can stand up to a full day of wear.

When MAC announced the new MACStack Mascara ($28), an alleged one-and-done formula designed to be the ultimate mascara, it felt like a too-ambitious undertaking. But leave it to the nearly 40-year-old company to pull it off—after some rigorous testing, it's not a stretch to assert that this might just be the final say in mascara. For now, at least. Ahead, learn more about the new MACStack Mascara launching today (Mar. 1), and read our honest reviews.

Why We Love It: Two brush size options for custom results

To nail a true one-size-fits-all mascara, the MAC team was first tasked with somewhat of a reverse-engineering situation. Before creating their new launch, the brand set out to learn exactly what makeup customers love about their favorite mascaras and what they wish was different. A two-year development process led the research and design team to experiment with all sorts of different formulas and brush designs before landing on the final product.

"When we did our research, a few challenges surfaced to the top," explains Jamie Lynch, MAC's Executive Director of Product Development. "First, people are looking for a volumizing mascara that does not clump," Lynch says, noting that people also want the option of buildability without sacrificing shape, wear time, or color payoff. "They are also looking for an all-in-one mascara that allows them to create both a minimalist/natural look or a bold/dramatic look with the same mascara versus having to buy multiple products," she adds.

That's where MACStack's true versatility comes into focus—a single coat of the mascara might plant you in cottagecore territory, but a few more coats and your real lashes may be taken for full-on falsies.

On its surface, MACStack looks pretty much like any other mascara, either from MAC itself or from other brands. The tube is a sleek, glossy black punctuated by a shiny silver sphere in the wand's handle. One major aspect that sets the new mascara apart from others is the two brush offerings, aptly named the Micro Brush and the Mega Brush. Customers can choose between the two options when purchasing, which are identical in formula but have slightly differing wand bristles for different needs.

The narrower Micro Brush, designed for shorter lashes or lower lashes, is equipped with fine-tipped bristles that are especially precise, and made to grip and coat even the finest hairs for buildable volume and length. The Mega Brush is also highly exact, but larger and created to grab bigger areas like long lashes and upper lashes. 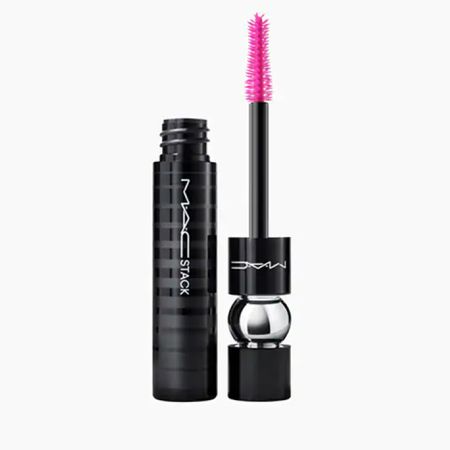 Equally important as the brush is the formula. Everyone who's tried to layer on several coats of mascara knows what a precarious task it is. Sometimes the lashes get too clumpy, too weighed down, lose their curl, or start to flake as the product dries on lashes. MACStack, however, is designed to build layer upon layer of mascara for maximum dramatic effect, thanks to a specialized polymer blend formula two years in the making.

MAC's proprietary Fibre Melt Technology has the lightest weight in fiber technology, Lynch explains, and when combined with an aerodynamic formula, the fibers adhere especially well. "The various length fibers contain both round and triangular-shaped cross-sections, allowing the formula to eliminate unevenness," she says. "Lashes will appear to be plumped to their full potential with uniform adhesion." The result is 24-hour wear that, even when reapplied hours later, manages to stay looking fresh.

I'm someone always looking to downsize my makeup stash, but not at the cost of my different 'looks'—which means I have about four different mascaras floating around at any given time, each one serving an individual purpose or contributing to a specific makeup aesthetic. Truth be told, MACStack might be one of only two I need now, and that number would shrink down to one if MAC ever releases a brown edition.

I've always been afraid to layer on several mascara coats for fear of dreaded clumps, but I loved combing on more and more of this formula. The only time it gets even vaguely clumpy is when I cry in it (I have a lot of feelings, okay?) and even then, I really like how it looks when it gets slightly gummy from my tears. I already skip false lashes most of the time, but MACStack might be the final death knell to my falsies collection—there's just little need with a formula this dramatic and buildable.

The first thing that comes to mind: this is not an everyday mascara. The marketing claims that this product will offer "gravity-defying" volume, infinite build, and length and lifting. On me, it delivered best on the volume claim. My lashes looked far more voluminous than they have with really any other mascara that I've used over the last several months. The lengthening was also top-notch, though I personally didn't get quite as much lift.

As for the buildability—I would say yes, but building up mascara is always going to come with a level of clump. (I'd generally prefer less clumping, even if it comes at the expense of volume, but that is completely a personal taste thing). Overall, this mascara delivered really dramatic results; it's the kind of mascara you could use after curling your lashes on days you want to skip falsies. So if you're looking to do it big, this one is definitely worth a try.

This may sound controversial, but I absolutely love a clumpy-looking mascara, so needless to say, when I found out MAC was launching the MACStack Mascara, I jumped all over it. The mascara is meant to be layered to create drama at buildable levels. Here I'm wearing three coats and I just love the ultra-black length it gives off.