What Is an LVL Lash Lift? This Treatment Changed My Life 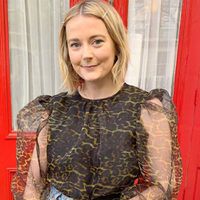 My lashes and I have a love-hate relationship. They’re long, which I know because every single makeup artist I’ve ever met has told me so, but they’re also stubborn and refuse to curl. No matter what mascara I use or which curling tool I purchase, they do not curl. That’s why I decided to give them the LVL treatment that promises to lift, volumize, and curl stubborn lashes. I’m no lash-treatment novice—I’ve had them curled before and even became addicted to lash extensions for months on end (my bank balance didn’t look too healthy)—but I’d never tried an LVL treatment. One week after having it done, though, I was pretty much hooked. I had never seen my lashes look so lifted. Even without mascara, they actually looked more lifted. It’s safe to say I’m a total convert.

To learn all about LVL lashes, I enlisted the expertise of Charmaine Kyriacou, former head trainer at the now closed NYC/London salon Browhaus, where I had my treatment, as well as Kenna Murray, former national trainer for Amazing Lash Studio.

Thinking about joining me in my LVL bliss? Read on for my honest review.

What Is an LVL Lash Lift?

What Are LVL Lashes?

LVL stands for "length, volume, lift," says Kyriacou. It’s a lash-lifting treatment that works with your natural lashes to give the appearance of curl and volume. The results are meant to last up to two months with little prep or downtime needed.

"'Length, volume, lift' is like a perm for your eyelashes. It elevates and curls your natural lashes for four to eight weeks," says Murray. This is an approximately 45-minute treatment in which a lifting balm and volumizing fix are applied to your natural lashes (no extensions here!) to straighten and lift from the root of the hair follicle. It also involves a lash tint.

Benefits of an LVL Lash Lift

How to Prepare for an LVL Lash Lift

The process actually starts 24 hours before you have your lashes permed, with a patch test at the salon. I know, I know—it’s frustrating to have a patch test every single time you hit the salon chair, but it’s crucial to ensure your skin will take to the treatment.

I wear contact lenses, and I do wish I’d taken them out for the treatment. I was told keeping them in was absolutely fine, but I was very aware of my lenses throughout.

Though I was slightly worried about the LVL Lash Lift damaging my lashes, Kyriacou assured me that it wouldn’t. According to her, it all depends on how often you have the treatment, so if you go back every three weeks or even more regularly (which there’s no need to), you could cause potential damage to your lash area.

"The most important step you can take is to arrive at your appointment with freshly cleaned eyelashes," says Murray. Amazing Lash Studio does offer a service called a Lash Bath for those who want the full salon treatment, which includes a thorough, three-minute cleanse of the lashes using the salon’s Eyelash Foaming Cleanser and Lash Bath Brush.

What to Expect During an LVL Lash Lift

A solid 24 hours after my patch test, I finally made my way back to Browhaus for the real deal. The salon has a reputation for being the boss of eyebrows, but it also offers a selection of lash treatments.

Upon arrival, I was taken downstairs to a private area and asked to lie down on the premade bed. The treatment started with the technician cleansing the eye area to ensure all traces of makeup were gone and then asking me what type of curl I would like. As I’d had my lashes curled previously (minus the tint) and been slightly disappointed, I decided to go full volume with a tight curl.

You can choose between a loose or tight effect, but l went for the tighter look. The technician then measured a small rod against my eyes. The rod sits as close to your lash line as possible on your eyelids—it’s what holds the curl as the bonding gels are applied. Next, she applied a lash glue to pin back my lashes to the rod.

Soon after, a perming lotion is applied to your lashes, which has to sit for around 20 minutes. I felt very relaxed; in fact, I definitely fell asleep. After the perming lotion had done its magic, the technician came back and applied a neutralizer, which was left on for another 15 minutes.

Finally came the tint. I went for black, as I wanted to be able to be mascara-free on a daily basis. You can cater the color to your own personal preferences, though. Part of the beauty of LVL lashes is that the tinting only takes around three minutes. The whole treatment felt very safe, and I felt completely comfortable for the hour duration.

This is me with mascara on, no joke. You can see that my lashes are long, but you can also see how straight they are. I wasn’t lying about the fact they don’t curl at all. Below is the "after."

Much more lifted and curled! You can really tell from this image how much more open my eyes appeared after the treatment.

How does LVL compare to popular keratin treatments for the eyelashes? There are many similarities. Both involve applying a serum and a curling device called a "rod" to your natural lashes, without adding extensions. They also both result in very natural, wispy lashes, though the effect can be customized with the size of the rod. For keratin lash lifts, the semipermanent curling solution is, well, keratin-based. If your eyes are sensitive, LVL might be a better choice because keratin lash lifts can sting. They’re also on the pricier side, at about $100-$200.

Sometimes the two treatments can be combined. "At Amazing Lash Studio, we don’t differentiate between a lash lift and a keratin lift," says Murray. "The keratin process is part of our lash lift, and we strongly recommend always including this nourishing part of the service."

While lash lifts are pretty safe, according to Kyriacou, it’s important to heed the recommendations of professionals, get your patch test, and avoid getting them done too often (addicting as the results might be). "The active ingredient in this service is a perm solution that may cause dryness or irritation in some," notes Murray.

I did not personally experience any discomfort or negative side effects from the lash lift, but if your eyes are more sensitive, there’s a chance you’ll have some moderate discomfort.

Kyriacou recommended that I wait for around 48 hours before having any contact with water around my eye area. This is because water can loosen the curl, as it needs time to set. You can wear eye makeup and mascara with the LVL Lash Lift, but again, I had to wait for 48 hours (this was difficult—I won’t lie). But now I’m left with beautiful, fluttery lashes that need no eyelash curling and hardly any mascara. The dream.

According to Nouveau Lashes & Beauty, creator of the LVL system, your lash lift should last between six and eight weeks. Certain things will cut this time down. The use of oils in your makeup and skincare products may seriously diminish the life of your new lashes and should be avoided at all costs, even after 48 hours. You won’t want to mess with eyelash curlers or perming equipment either, for the same reason. In fact, you shouldn’t be manipulating your lashes much—if at all—and should be brushing through them with a spoolie brush every time you get them wet.

A good time span between your treatments is about two months. This should give your lashes a chance to go through their normal growth phase and may help prevent damage.

In short, I’ve become totally smitten with my new wide-eyed, fluttery lashes. I swear, the LVL Lash Lift is the best beauty treatment I’ve ever had. This long-lasting and relatively affordable/low-maintenance lash lift just might make me ditch mascara for good.