Lush Vanishing Cream Literally Changed My Life and My Skin

For as long as I can remember, I've had problem skin. It started when I was a baby with eczema, which continued well into my teens and caused me no end of frustration and pain. Then I had seriously dry skin, which actually turned out to be dehydration (like most, my skin was in desperate need of some hyaluronic acid), and now? Well, now I'm battling hormonal acne. I've had to totally rethink which products I use, and surprisingly, cutting back on the thick creams that I thought were keeping my hydration levels controlled has had an incredible effect.

But so has using this one Lush cream a friend recommended to me a few months ago. Lush isn't typically a place I head to for skincare. Yes, I regularly dip into its bath bomb selection and am a big fan of its sugar lip scrubs, but until this, I'd never tried its skincare. Lush's Vanishing Cream ($26) isn't your average moisturizer. It's light and quite literally vanishes into the skin as soon as you apply it. I'm used to the type of cream you apply and can still feel sinking into your skin three hours later. To me, that meant it was doing its work, but this was where I was wrong. 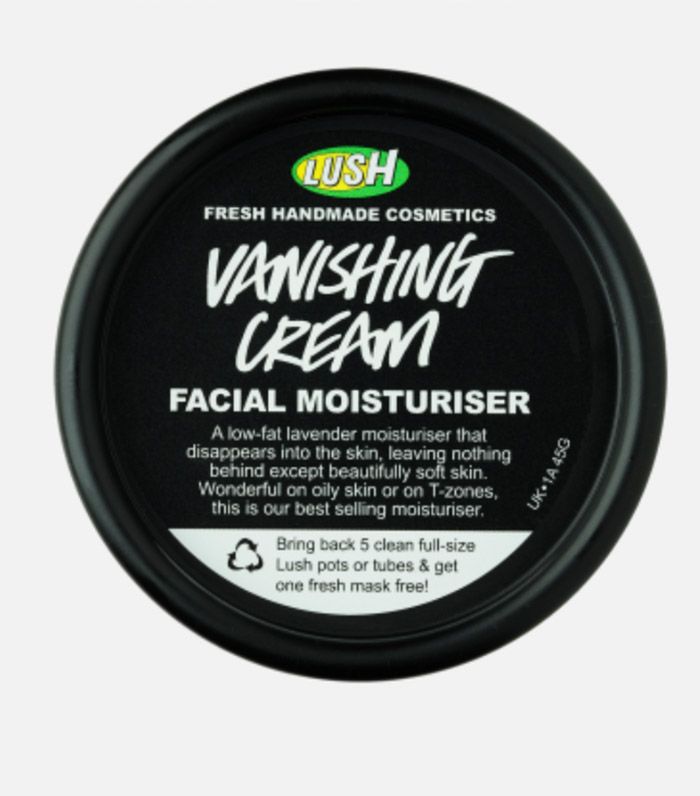 In overloading my skin with thick creams and serums, I was not only clogging my pores, but I was also causing more inflammation to my extremely sensitive complexion. That's why Vanishing Cream was exactly what I needed. It's packed full of essential oils like lavender, neroli, and geranium, all of which balance out skin and calm inflammation. The witch hazel extract prevents bacteria growth, which has helped my hormonal acne to no end.

It's cocoa butter–free so it doesn't feel like it's clogging your pores, but it doesn't leave your skin feeling parched either. In fact, I've totally forgone my old heavy-duty moisturizer in favor of this both morning and night. And, I kid you not, after the first time I applied this to my face, my normally blotchy, acne-inflamed skin looked calmer, more even and less angry within 30 minutes. And it's continued to do its work over the past few months.

My hormonal acne isn't completely controlled (it probably has something to do with my stress levels, which is an entirely different story), but it's manageable now, and I can handle the odd breakout. And my favorite thing about it? It's infused with lavender honey water, so it not only calms my complexion, but the soothing scent calms my mind too. I feel happier and more confident now that my skin is improving, and that's easily worth $26.