Letting Go Loving My Rosacea Is Not the Antidote The Winter Issue ft. Halsey

Loving My Rosacea Is Not the Antidote

I'm tired of being told I should embrace it. 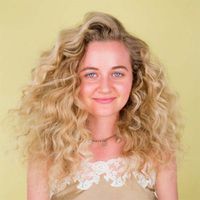 Harling Ross
Harling has been writing professionally for over six years covering fashion, beauty, and home decor. She has contributed to Byrdie since November 2020.
Byrdie's Editorial Guidelines
Medically reviewed by
Morgan Rabach, MD


In middle school, I developed a habit of studying my appearance whenever I passed by a store window. For the most part, I looked the same as I did when I looked in a mirror: awkward, frizzy-haired, brace-faced—save for one substantial difference. In the forgiving reflection of windows, any redness and inflammation from my puberty-induced rosacea was invisible.

While I outgrew (most of) my awkwardness, learned to love my curly hair, and eventually experienced the unique, slick-toothed euphoria of getting my braces off, rosacea—and my self-consciousness about it—became permanent souvenirs of adolescence, persisting into adulthood. I was aggressive about trying to conceal any sign of redness, piling on heavy foundation and dusting it with powder to make sure it didn’t melt off throughout the day. Then I moved on to my "everything green" stage—and I don’t mean green as in clean or sustainable. I mean literal green stuff. Green lotions, green serums, green foundations—all reputed to "cancel out" the color red. Then came the prescriptions, Rhofade and Ivermectin. Some of it helped (I particularly liked Ivermectin). Most of it didn’t. Either way, the redness never went away completely.

Over the years, I’ve been the recipient of copious rosacea-related advice. I’ve been advised to cut out red wine, spicy food, and dairy (three of life’s greatest pleasures? Impossible!), try getting IPL treatments (I looked into them, but they are too expensive for me to justify the cost of multiple rounds), or "learn to love it!" (I wish I could feel this way about it, but I know myself well enough to understand it’s an unrealistic solution, at least for me). But the most impactful thing I’ve done for my rosacea was not the product of sage advice. It was also easy, free of charge, and kind of unintentional: I started talking about it… a lot.

I posted photos of flare-ups in my Instagram stories. I highlighted different products I was trying out and liked. I poked fun at myself for resembling the second cousin once removed of a vine-ripened heirloom tomato whenever I ate spicy curry. I used to be devastated by comments like "wow you’re really sunburned" when, in fact, I hadn’t spent any time in the sun at all. But in the process of repeatedly naming and acknowledging something I’m self-conscious of, these kinds of misconceptions started to happen less often, and when they still occasionally do, they aren’t as triggering. I try to respond to them in the same way I try to respond to my rosacea when it acts up: with a shrug.

This shift in attitude started to affect the logistics of my skincare routine, too. I stopped trying to cover up or "eliminate" my rosacea—an approach that has only led to frustration in the past—and instead began educating myself on how to take better care of my rosacea-prone skin. I read up on the importance of choosing the right cleanser to protect my stratum corneum, aka the barrier that prevents unwanted materials from entering and excessive water from exiting the body. I studied the names of ingredients that can cause reactions for people with rosacea—stuff like denatured alcohol, witch hazel, fragrance, menthol, peppermint, and eucalyptus oil—and kept an eye out for them when buying new products (INCI Decoder has been a huge help for me when it comes to understanding the functions of different ingredients, though I also try to keep in mind that the way ingredients are sourced and formulated matters a great deal as well). And finally, I learned how to moisturize more effectively, which for me means applying my regular moisturizer on damp skin and sealing it in with an oil in the wintertime.

It’s an ongoing process, and there will always be something else to learn (or misinformation to unlearn), but truly caring for my skin while also practicing a more noncombatant stance toward the things about it that bother me has proved to be a pretty transformative combination. The concept of body neutrality—or the idea that you can exist without having to think too much about your body—isn’t new to me, but I’ve realized it can apply to so much more than just my physical shape or weight. As with other aspects of my appearance, like the contour of my stomach, or the way my chin looks in profile, forced self-love is not an antidote to how rosacea makes me feel. Talking about it openly, to the extent that I’m beginning to see it as something boring (like the weather!), and perhaps eventually not worth mentioning at all, just might be.

"Giving Up" Isn't Always Bad—Here's How to Lose the Shame