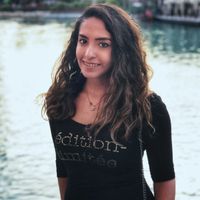 Natasha Amar
Natasha Amar has worked as a freelance writer and photographer for over 7 years. She has written for National Geographic Traveller UK, Forbes Travel Guide, Departures, and others.
Byrdie's Editorial Guidelines
Reviewed by
Dana Myers, LCSW

Reviewed by Dana Myers, LCSW
Dana Myers, LCSW is a licensed clinical social worker and life coach based in Philadelphia. She has a special interest in how race, sex, gender, ethnicity, social status and competencies impact those in marginalized communities and aims to help her clients find purpose and peace in life.
About Byrdie's Beauty & Wellness Board
Licensed Clinical Social Worker

The dishes pile up in the sink and the laundry hampers threaten to spill over. The bed looks like it’s being slept in all day; the grey sheet forever crumpled and an odd person-shaped lump under the empty covers. Grilled chicken strips from two weeks ago (“or was it three?” my husband asks) sit forgotten, wrapped in foil, on the bottom shelf of my fridge. A thin layer of dust begins to form on candles, and books, and lampshades, and photo frames—the many objects that make my house a home—and clumps settle sneakily in the corners of what seems now like my whole world.

But now, hunkered at home, when the novelty of baking sourdough has worn off, things are different. The clutter that has sprung up around me in our two-bedroom apartment is no match for the clutter that has taken up space in my mind. Utterly lost, I find myself constantly going down rabbit holes of thought—trivial, deep, irritated, optimistic, irrelevant, despair-filled, selfish, overwhelming, and often, as random as the many tabs that remain open simultaneously, all day every day on my browser. It’s all too overwhelming.

I have known, for a few years at least, something is not quite right about the state of my mind. I have noticed the futility of 12-hour workdays, of bouncing desperately between ideas and tasks on my endless to-do lists, that yield a mere hundred words on the page—not exactly ideal in my career as a freelance writer. I have noticed being so unnaturally engrossed in tasks that everything else around me ceases to exist. I have noticed how I can never remember where my phone, or keys, or wedding ring, or glasses are, and how when I’m looking for my wallet, I sometimes draw a blank as to what it looks like. I have noticed that trying to multitask, even a little, can cause emotional distress, as can loud, repetitive noises.

But here’s the thing about mental illness: when you’re suffering from it, it’s easier to dismiss the symptoms as flaws in your personality.

I have been mortified by not being able to recognize acquaintances who’ve walked up to me, as though the few conversations I had with them never happened. I have been confused by my inability to recollect a single detail of a conversation with an editor because I was too distracted by how he held his fork and the clink clink sound when it touched his plate. I have noticed how my mind races at night, when my body is wrapped snug in my husband’s warm arms, feeding me stories, ideas, to-do lists, and plans; it’s like being on a wild ride that won’t end until the sun comes up.

The episodes I’ve had over the years, whether of blinding rage or inconsolable crying, stemming from resentment toward my husband of six years, feelings of incompetency and failure, troubling childhood memories, or simply feeling overwhelmed with life all the time, didn’t come from a place of rationality.

When it all began, my life was the best it had ever been—I was married to a wonderful man I’d known and loved for over half my life, lived in a beautiful home, did what I loved most for a living, and traveled often. But here’s the thing about mental illness: when you’re suffering from it, it’s easier to dismiss the symptoms as flaws in your personality. To say, “I am just stressed, or forgetful, or absent-minded, or incompetent.” Denial is a typical reaction from adults with Attention-deficit/hyperactivity disorder, or ADHD, and my reaction to my suspicions was no different.

Denial is a typical reaction from adults with Attention-deficit/hyperactivity disorder, or ADHD, and my reaction to my suspicions was no different.

While I’d known myself to be kind, calm, and logical, I began to believe I was turning into someone selfish, short-tempered, lazy, abusive, moody, forgetful, unfocused, and easily distracted. Worse still, I accepted that version of myself. I dealt with this unlikeable version of myself the only way I knew how. Every time the cloud in my mind grew darker, I packed a bag, boarded a flight, and took myself somewhere unfamiliar, close to nature. As long as I could spend my days outside hiking, even for just a week, I knew I’d feel like myself again. On wildflower trails and in sheep-filled meadows, my mind stopped racing. In the colors, sounds, and scents of forests and coastlines, it found a sense of calm instead of overwhelm. At night, deep, uninterrupted sleep was a welcome change. I used travel to try and "fix" myself.

After every trip, the positive effects would stay for months, spreading through every aspect of my life like the gentle warm rays of the morning sun after a cold, dark night. I’d come back as who I hoped I really was; a patient, kind, loving wife, a creative and efficient writer, and a fun-to-be-around friend.

During this pandemic, after the first month of staying home with my husband, it became glaringly obvious I was spiraling into a dark place. We’d spent weeks baking and snuggling up on the couch watching movies together, pretending it was still December, until I began to avoid being in the same room as him. What at first was distracting, soon became irritating, then infuriating—his footsteps pacing around the living room, the tap tap of his keyboard, the sound of his voice constantly on phone calls, his work files on the table, his very presence. My mind blamed him for my own inability to focus on anything, but really it was ADHD, something I’d suspected for a while, but hadn’t allowed myself to consider seriously. No, it was just anxiety, I told myself, the normal kind that everyone has.

I taunted, yelled, and constantly complained. I was miserable and I did my best to project that misery onto him through frequent outbursts. He responded by retreating into the kitchen, to listen to music on his headphones and cook for us.

My ADHD symptoms came on stronger because of the heightened anxiety about this new normal. I’d lost assignments and within a month, my income fell to zero. After six years of working hard to establish a career as a freelance travel writer, the future looked bleak. But I had so much to be grateful for, at a time when so many others are struggling with loss, loneliness, and separation from significant others. Our families were healthy, we had savings to count on, the supermarkets in our neighborhood had full shelves, and we were together in our home.

My mind blamed him for my own inability to focus on anything, but really it was ADHD, something I’d suspected for a while, but hadn’t allowed myself to consider seriously.

Instead, I pictured myself on my sixth-floor balcony, teetering on the edge, and wondered what it would be like to throw myself off—if my husband would get over it, and ultimately be better off without someone as unstable as me. Then almost immediately, I chided myself for thinking these ungrateful, selfish thoughts. I began to realize that my fear of facing my disorder was keeping him from being with the version of me he deserved. Someone sweet, kind, and compassionate. I didn’t just owe it to him, but I also to myself to find that woman again.

Reading about ADHD, I forced myself to focus instead of scanning over the first few lines, as I’d done many times before. It finally made sense—the inability to focus and prioritize tasks, heightened emotions, often losing track of what I was saying mid-conversation, and experiencing a state of hyperfocus in which I’d forget to eat or drink water all day, they were all symptoms of ADHD. I saw patterns scattered across my childhood and teenage years, ones I’d simply never understood before. I took online assessments and every single one said that I had a strong indication of ADHD.

At first, admitting to myself that I might need professional help felt like an admission of weakness. I’ve never thought of myself as a victim of circumstance. As it turns out, my first step in separating how my mind works from who I am is to be kinder to myself. I needed to recognize the burden of perfection I carry around is self-imposed. I am beginning to understand that there is no shame in needing help and asking for it.

While the rest of the world adjusts to their own 'new normal,' I am learning to practice mindful breathing, meditation, journaling, and use positive affirmations.

After a long, heartfelt conversation with my husband, I’ve signed up for online therapy, considering that we expect to be spending the next few months at home. It hasn’t been long but, already, the first few sessions of Cognitive Behavioral Therapy have helped. While the rest of the world adjusts to their own "new normal," I am learning to practice mindful breathing, meditation, journaling, and use positive affirmations. Some days are better than others, but my awareness of my cognitive distortions brings me hope, even on the days that are tough.

I’d be lying if I didn’t admit I am afraid of the stigma around mental illness. As an Indian woman, I’m expected to sort out my issues by talking to my friends and family, and if there are issues deeper than that, then they’re accompanied by the very real fear of being labelled "crazy" or "neurotic."

Lately I’ve confided in a few friends, but I don’t think they know what it means to have ADHD. I’m not even sure I understand completely. What I do know is understanding how my brain is wired is a process that will take time and patience. While I am now comfortable enough to associate myself with the four letters that impact every day of my life, I still have a long way to go. I’m relieved to have taken my first step on the road to recovery, and I’m hoping that it’s the hardest one.