Here's Why People Are Using Chlorophyll to Treat Acne

Medically reviewed by Rachel Nazarian, MD, FAAD
Rachel is a board-certified dermatologist and Assistant Clinical Professor at Mount Sinai Hospital Department of Dermatology. She has contributed to Byrdie, as well as Harpers Bazaar, Marie Claire, Allure, Vogue, and the New York Times, and more
ABOUT BYRDIE'S BEAUTY & WELLNESS BOARD
Board-Certified Dermatologist
Fact checked by
Lisa Sullivan

Acne is a bit like a game of Minesweeper (and I hope I'm not aging myself too much with this reference): You take careful steps to keep your skin clear, but one wrong move and you break out like crazy. And if you haven't nailed down a strategy to help your skin stay clear, you end up just clicking around—I mean, treating it—haphazardly and breaking out even more quickly. That's why it's paramount to find a proven treatment that won't lead to another mass of mines scattered across your face.

Enter chlorophyll. You learned about it in elementary school science and probably remember it's what gives plants their green hue. Modern science has discovered that it's actually powerful against pimples. "Based on several clinical trials, chlorophyll likely works through both decreasing inflammatory markers in the skin and decreasing P. acnes, a bacteria thought to contribute to acne formation," explains Rachel Nazarian of Schweiger Dermatology Group. Want to learn more about how this natural ingredient works in combat? Keep scrolling.

How Does Liquid Chlorophyll Work to Treat Acne?

When applied topically, chlorophyll works as an antibacterial as well as an anti-inflammatory. But while chlorophyll works independently in these ways, Nazarian tells us that it's never been tested specifically as an acne remedy before a line called BioClarity.

BioClarity offers a three-step skincare regimen that works by utilizing altered chlorophyll molecules that have gone through substitution of magnesium with copper, creating Floralux, the brand's patent-pending, proprietary ingredient. This provides additional skin benefits such as the boosting of collagen and elastin formation without the worry of using traditional heavy metals that carry a risk of toxicity. Nazarian says that because the molecule is anti-inflammatory and combined with several other calming ingredients within the three-step system, the risk of irritation is decreased, and the product can be used twice daily and with other products.

Chlorophyll has also been proven to work well in conjunction with photodynamic therapy, or blue and red light. Researchers found that applying the light on top of a chlorophyll-lipoid complex (similar to Benevolent Nourishment Liquid Cholorphyll, $22) helped to significantly decrease acne lesions and sebum levels when compared to using light therapy on its own. 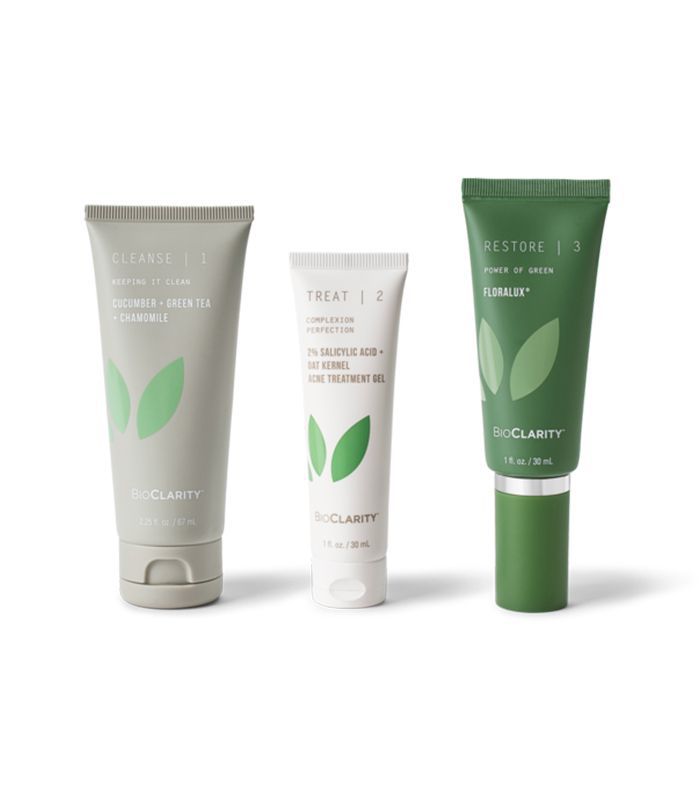 Should You Apply Chlorophyll Topically or Ingest It?

Aside from the aforementioned study that used light in conjunction with liquid chlorophyll, little research has been done to prove the plant pigment's efficacy in directly treating acne. However, Nazarian says it can be applied topically on its own if you so choose.

Will drinking chlorophyll help with acne? "The trials and research on this are still being done, but there is some evidence that supports orally taken chlorophyll in an anti-aging regimen," explains Nazarian. "Chlorophyll's natural antioxidants are thought to fight free radical damage, leading to improvement in signs of skin aging, such as decreased wrinkles and repairing DNA damage."

While you can purchase liquid chlorophyll and put it in your drinks or food, you can also get the good stuff straight from the source by making a smoothie with leafy greens like spinach, kale, collard greens, and chard.

Next: Read what happened when I tried another green drink to clear my acne.