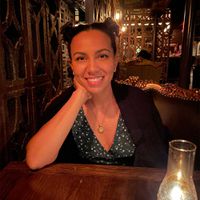 Alex Shea
Alex has been a full-time writer for the past three years. She started her own copywriting business, Alex Copy Co., in August 2020.
Byrdie's Editorial Guidelines

Growing up, I learned women shaved their legs often and I never thought to ask why. In hindsight, they were only teaching me what they knew. I had this idea that if I didn’t shave, I was somehow less desirable. My mind had created a direct link between the amount of hair on my body and possible love and affection.

I went years shaving every week, throughout high school and into adulthood. I spent most of junior high shaving my arms, because god forbid anyone thought I was less feminine for having dark hair on my arms. I refused to wear shorts or dresses when my legs weren’t shaved. I didn't wear tank tops on days I forgot to shave my armpits. If I had a date, I'd up the anty and shave twice in the same week, on the rare chance they'd know I hadn't shaved in a few days. Needless to say, that shit was in my head—preconceived notions from conversations with my family and other women who grew up with the same made-up standards.

The first step I took to body-hair freedom was letting my arm hair grow. And you want to know what? My arms still look like arms. I was able to stop thinking about how ugly I was with arm hair and, eventually, I stopped thinking about my arm hair altogether. A few years later, I moved to a different city on my own and my relationship with my body hair continued to change. I met, hung out with, and became friends with a new group of women. Women who, from what I saw, owned and loved their bodies. Wearing dresses with leg hair and bralettes with hair peeking out from their armpits. They were comfortable, powerful, inspiring—exactly how I wanted to be.  Around that time, I stopped shaving once a week and instantly felt liberated. Nobody even focused on my body hair, at least not anybody I paid attention to. I went to beaches and lakes wearing a swimsuit without meticulously trimming my bikini line hours before. I wore shorts after going two weeks without touching a razor. I was getting comfortable with my body and the hair on it.

The first step I took to body-hair freedom was letting my arm hair grow. And you want to know what? My arms still look like arms.

Fast forward to the pandemic and I began shaving even less. There were so many other things going on in our lives that had nothing to do with maintaining my body hair. I’m grateful to love and live with someone who supports my decisions and who sees body hair for what it is—natural and normal, beautiful even. But shaving less frequently quickly became a catch-22 situation. Extended periods of time without shaving meant I spent more time, more water, and more energy when I did.

That’s when the guilt crept in. For a moment, I considered shaving more often to avoid feeling guilty. I also considered never shaving again. Neither of which I was fully on-board with. Sure, smoother legs after a shave-break felt wonderful. But there were bills to pay, clients to find, food to eat, pups to play with, people to talk with. Life was happening. I didn’t want to spend more time than I had to in the bathroom shaving my body. After all, that’s why I still shave—for me. It's what I decided a few years back when I lived on my own. Shaving was something I did on my terms. Something I chose to do. Something I enjoy from time to time.

If the pandemic has taught me anything, it’s that time and energy are valuable. This pandemic has made a lot of us reconsider what we’re placing emphasis on in our lives. What’s important and what just plain isn’t. And for me, shaving is no longer something I want to spend hours every month doing. So, I invested in a safety razor and it was the perfect solution. I can go an entire month before touching my trusty razor. But I know that when I use it, it takes me less than 10 minutes to get everything taken care of—no guilt. In and out of the bathroom and back to living life and doing the damn thing. I’ve never felt more secure, comfortable, and empowered in my body.