A Euphoria-Inspired Glitter Collection Just Launched, and It's The Stuff of Gen Z Dreams

Even before I sat down to watch the social media sensation that is Euphoria, I was aware of its emphasis and influence on beauty. I had seen the stills of the characters wearing graphic and glittery makeup looks. In one, Zendaya wears smudged glitter that falls down her cheeks like tears. In another, Barbie Ferreira's red lips are contained within a thick black perimeter of liner. They're not the most traditional or subtle makeup looks, but that's kind of the whole point, isn't it? The show has encapsulated the Gen Z beauty aesthetic. It's bold, colorful, and imperfect, just like the characters themselves.

If you were as inspired by the looks as we were, and you're looking to branch out from your standard look into more of a, well, Euphoric territory, then we have good news. One of team Byrdie's favorite makeup brands, Lemonhead LA, is celebrating the show by debuting a limited-edition Euphoria-themed glitter kit. It's called the Euphoric Glitter Squad, and it includes 7 shades of the brand's iconic glitter pastes that were either inspired or actually worn by the characters. Keep scrolling to see the new Glitter Squad in all of its bold, flashing glory. 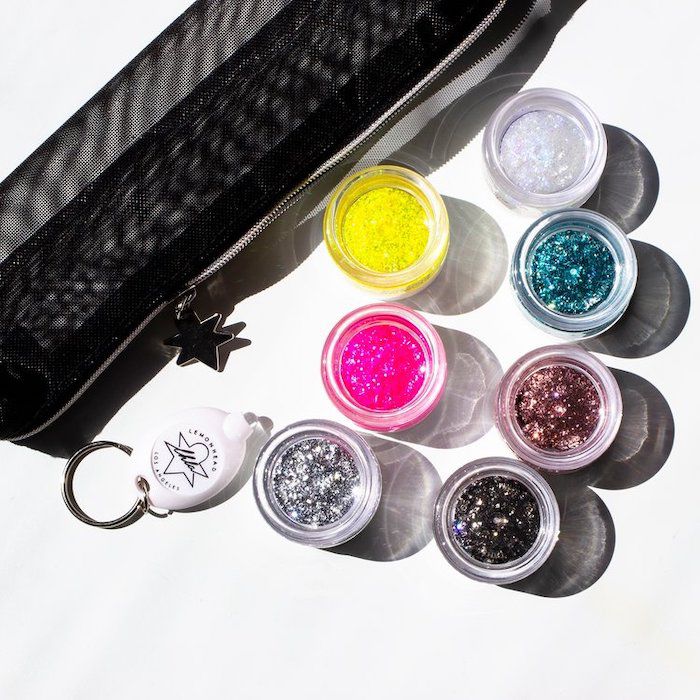 In the Glitter Squad, which is available right now for $75 (even though it's valued at $99), there are 7 mini versions of shades either inspired or actually worn by the characters in the show. Let's break it down shade by shade. First, there's the Houdini Spacepaste, which is that icy white glitter that has a lavender shift. In the actual show it was worn by Rue, who is played by Zendaya, and Jules, who is played by Hunter Schafer.

In this photo, which was posted by one of the show's makeup artists, Doniella Davy, you can see the Houdini Spacepaste on Jules' temples. It's "invisible unless light hits it directly and then it’s a periwinkle explosion," Davy wrote in the caption. It gives a cool blacklight effect.

The Glitter Squad also includes Lemonhead's Mulholland Spacepaste, which is a rosy pink color (it's flattering on literally every single skin tone). In the show, Alexa Demie's character, Maddy, wore it on her eyelids in a cool, 60s-inspired ode to Jodie Foster's character in the movie Taxi Driver.

Sydney Sweeney's character, Cassie, wore the brand's Private School Spacepaste in one of her most memorable episodes. It was applied all over the lid, in a graphic cat eye shape. "This look was all about letting Sydney’s eyes get a turn to sparkle," Davy wrote in the photo's caption. "I love the effect this glitter has throughout the whole episode."

Lemonhead LA's Groupie Spacepaste is a burnished gold that was worn by Zendaya's character, Rue, to give her a messy smokey eye look.

The Euphoric Glitter Squad is available right now on Lemonhead LA's website. With the fervor and fanfare surrounding the show, as well as the fact that it's a limited-edition collection, we suggest snagging one for yourself ASAP, because it probably won't be around for long. Now, please excuse us while we purchase one for ourselves.

Next, the little-known sunscreen brand I can't stop using.