Erin Jahns is a hair, makeup, and nails expert and beauty editor with five years of experience in the industry. She is currently the senior beauty editor at WhoWhatWear.

"So are you super-bright blonde?" I ask inquisitively into the phone. On the other end, there's a pause and then a chuckle. "I am. In the truest sense of the word." There's confidence anchored by a touch of hesitance in the voice—none too surprising considering that actress Leighton Meester has just spent the past six hours of her Monday in a salon chair at the Nexxus salon in New York City undergoing a major hair transformation. And no, this is not a late April Fool's joke.

Meester, who for the majority of her celebrity has sported glossy brunette strands (of which also remain perpetually synonymous with a certain signature character), just went blonde. And not just any shade of blonde (she does have a history of dabbling in richer shades of bronde and goldenrod, after all), but "Hitchcock" blonde. An icy, edgily glamorous shade of near-white platinum—courtesy of her magical go-to colorist Aura Friedman and a litany of hair-saving product from the haircare experts at Nexxus. (Because as we know, going to the blonde side—especially when you start with a darker base like Meester—is far from child's play when it comes to damage danger.)

And naturally we had some questions. From the iconic blonde movie star who inspired the color direction (ahem, if you're thinking Marilyn, go ahead and guess again), to the one hair look she'll always regret, we got the exclusive scoop on everything strand-related from Leighton herself. Keep reading for everything you need to know about the actress's brand-new hair color, her must-have products, and why she perpetually steers clear of hair dryers.

Despite the fact Meester is most-known for her long, iconic brunette strands, she has mixed it up over the years where dimension and depth is concerned. In fact, she's been pretty blonde in the past (though never this stark) and was flaxen-haired as a kid. So, I was curious—why the sudden urge for a change? As someone who told us exclusively last year she's pretty low maintenance when it comes to her beauty M.O.—and with platinum blonde being the most high-maintenance color known to womankind—the change seems slightly out of character. But perhaps that's the point.

"You know, all along I've wanted something just totally and drastically different. My length was super long, my color was completely grown out, and I was just craving exactly the opposite of what I've had. I have experimented with different shades of blonde over the years, and I was blonde as a kid, and I just thought to myself, I want to do this! Plus, this isn't an attempt to look natural. This is a completely different look. I always just thought I would go platinum at some point, but I had this, Oh, I'll try it someday approach. But I guess today is that someday," she laughs.

But what about specific inspiration? After all, many a celebrity has been taking the platinum plunge recently, and it would be easy to assume Meester's take could be cut from the same ultra-modern cloth. However, her response to my question surprises me. (However, considering the down-to-earth, richly old-soul cadence I detect over the phone, perhaps I shouldn't be.)

"Well, there was actually this amazing picture of Jayne Mansfield up at the salon. And so that was kind of the look we were going for. We went the tiniest bit darker at the root, but this is definitely a true platinum shade of blonde—a Hitchcock blonde."

As mentioned, Meester told us last year her typical approach to makeup is bare minimum at most and frankly, the actress has made her clear, luminous skin, bright liner-less eyes, and naturally textured strands her signature. But now that she's a blonde reminiscent of Hollywood's glamorous golden era, what's on the horizon?

"As far as style, I already feel like I'll need to downplay my clothing a bit because the last thing I ever want to do when I'm blonde is wear a color like pink. It just feels a little too Barbie," she chuckles. "So I end up wearing a lot more gray and black and white and navy, which feels like it offsets the blonde really well for me. And then for makeup, I think the idea is 100% true that you need just a little bit more. But it's also more fun to experiment and try different looks with this color.

"When you're this light, it's sort of edgy. For instance, I just put on a red lip—I'm trying that out—and I'm just really into testing the waters. One thing I love about color is that at least for me personally, it just also always looks a little bit more 'done'—like I almost don't have to style it. I'm also excited to see how my natural texture reacts to the change because I have it blown out right now. It's super soft and feathery. But naturally, I have a lot of wave."

Talk to any colorist about going blonde and they'll likely make an adjacent suggestion to also shed some length. (Just because the inevitable breakage can do a number on the look of your ends, making them appear a tad more battered and frayed.) So while a cursory glance at the actress's Instagram account made it appear as if her trademark length was still intact, I learn it's actually quite the opposite.

"No, I actually chopped off about eight inches recently! I've had really long hair for a while now, and the truth is that I don't ever really have a master plan to grow it out or a specific style or cut I'm trying to achieve—this is just kind of what happens when I leave it alone for a few years. So I was really into cutting it. I also had a lot of grown-out highlights and color, and I just really wanted to start from scratch. It had been over a year since I dyed it, so we just chopped off everything from before and started with completely virgin hair."

That being said, just because Meester was fine with shedding eight inches of length in anticipation of going platinum doesn't necessarily mean she's been at peace with every cut she's had in the past few years. Luckily, however, she's able to laugh about it.

"I mean, I have always liked bangs, but whenever I've tried them, there's always that horrible in-between time when you have to decide whether you want to grow them out or if you want to keep them and trim them. So whenever I've tried full bangs, I've had about a six to nine month period of growing them out—you know that stage when they're in between your eyes and chin? For me, it's terrible. It's not a good time. But I also did it a week after the election, and I feel like it just soured me on them."

Her Must-Have Products and Styling Tips 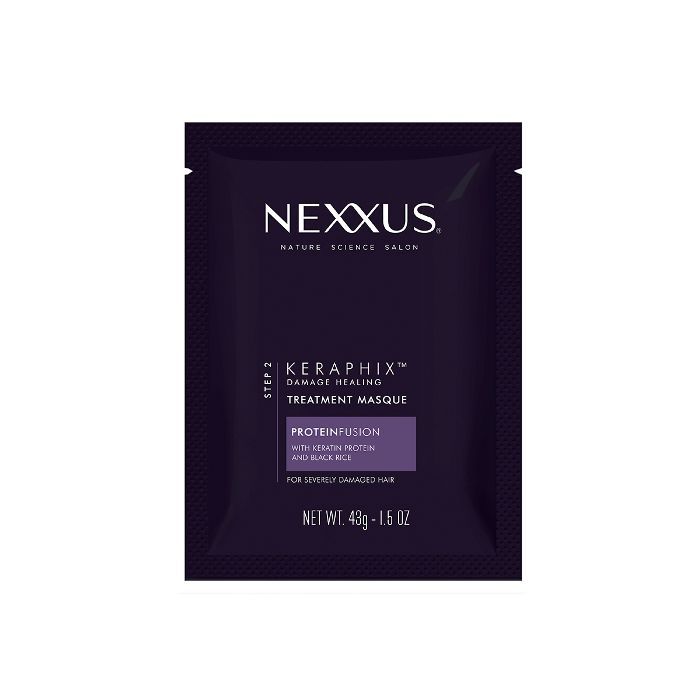 Even though Meester now has a brand-new shade of blonde, which she admits will, indeed, require more care and upkeep—more on that in a few—she'll still be keeping her product and styling aesthetic on the minimal end of the spectrum. An approach her newly vulnerable strands will likely thank her for.

"I definitely need to be religious about masks and weekly protein treatments. You know, I've always really cared about the health of my hair, and when you really go at it like I did today with bleach, that care and upkeep become doubly important. The goal was to preserve my hair's integrity and softness, so I tried to prepare! I've been using masks [ed. note: Meester has been using the Nexxus Keraphix Masque for Damaged Hair, $5] and weekly protein treatments—I love their Keraphix Gel Treatment for Damaged Hair $15 as well."

"I also really love to keep my hair as natural as possible, because when I'm working, it's exposed to so much heat and styling. Plus, I'll go as long between washes as humanly possible. When my hair is healthy, I really love its natural texture, so just letting it air-dry is really my ideal. It's actually when I feel like my hair is at its best. I basically rinse it with cold water and then I don't brush it! That's kind of my one amazing hair secret—I sort of just run my hands through it and scrunch it a little bit, which makes the shape of the wave a little bit more like permanent and defined."

What She'll Be Trying Next

Now that she's taken the plunge to platinum blonde, (which many other colors like rose gold, pastels, and even shades of red require as a base), it's natural to wonder what's on the color horizon for the actress, and whether or not this might just be the first step in a longer series of hair transformations for Meester.

"Well, I guess it just depends what the transition is like—whether it's for a part or just for my life. I think I'll want to keep the blonde for however long I like it. Aura is amazing, and I know it will grow out super naturally despite how drastic it is because that's just the trademark of an awesome colorist. Hm, but I don't know," she muses. "I'm into trying something different—red, pink, blue…"

So with technicolor hair possibilities still on our mind, the interview draws to a close. And while we'll wait for Meester's next hair move with bated breath (because honestly, we're pretty sure she could pull off any and every hair color beautifully), we'll also enjoy her current stint as Hollywood's newest member of the platinum club—albeit it will be her own unique iteration: "Hitchcock" blonde. Oh, and in case you're looking to take care of your own bleached tresses à la Meester, For a limited time only, Nexxus is offering a bundle of her must-haves featuring the best of the brand's coveted Platinum Collection (a shampoo, conditioner, treatments, and masque) for just $40—aka 25% off in celebration of Meester's latest hair transformation. You can buy the Platinum Collection Box ($40), here.