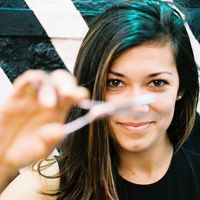 We've been falling in love with Kristen Stewart ever since she starred as Bella in the Twilight saga, and not just for her talents on the silver screen but for her hair-chameleon tendencies as well. For more than a decade, we've witnessed Stewart's varying lengths and hair colors, and the wildly inventive ways she's styled each new look with both edge and ease. Below, a celebrity hairstylist and colorist speak to some of her most noteworthy looks, with tips on how to re-create them. Keep reading for 30 of our favorite hair moments from Stewart over the years.

Here we see Stewart in an effortlessly romantic braided bun. To create a similar look:

Volume with an Edge

Overdirecting your hair to one side is a great trick for adding some casual volume and movement to hair. To create a couple similar braids for an edgy twist, we recommend grabbing your tail comb to create those super-clean sections and a good gel like Gorilla Snot to help keep the braided hair together for a sharp finish.

We love what a major statement this hairstyle was for Stewart's Met Gala look, and how simple it is to re-create this retro pin-up-inspired bang shape (spoiler alert: Real bangs are not required):

Using a hair chain barrette, or attaching your favorite chain links into a bobby pin, can make the perfect adornment to any classic chignon.

This equestrian collar may merit a French braid, but leave it to Stewart to make things more interesting. This French-braided fauxhawk is a favorite on and off the track.

Using a gentle hair oil or styling cream at the roots of a multi-tiered ponytail will give your style a tight, clean finish with extra control while adding a frizz-free shine to your strands.

To get a similarly sleek, brushed back lob, here's what Boorberg suggests:

For thicker strands, use bobby pins to secure your side sections so they lie flat beneath the back.

Side ponys are a great profile hairstyle. Applying some intricate twists to her mid-height ponytail allows all the hair to fall down to one side, creating a very modern, ultra-chic reinvention of the classic 'do.

Adding a few wefts of hair extensions will certainly fill out your best fishtails and can help give it a sturdy shape, especially for those with layered strands that want to stick out. The key to getting a fishtail this beautifully intricate is to take small sections all the way down and gently pull along the braid once it's completed.

"Red colors are typically more high-maintenance than others," says Rez, who explains that reds will always fade quickly. While it may be more vibrant to deposit your red into previously lightened hair, Rez says, "when using a demi permanent 'fashion' color, it will likely fade to more of an orange with every wash."

There have been many red-carpet occasions where Stewart has managed a simple yet thoughtful updo on the shortest of strands. Here's our take on the look:

Having cornrows hidden beneath your style can help remove weight and give your pins a solid foundation to securely attach to.

We love this shorter bob length on Stewart. The wispy ends keep her cut looking soft instead of blunt.

Crisscrossing our bobby pins certainly had its own moment in the spotlight, and it's safe to say Stewart wore the trend uniquely at every length.

Accentuating her natural wave pattern up top and letting it ease out into a soft finish toward the ends really emphasizes Stewart's cut and gives her style an effortless shape.

Bleaching a buzz cut or any short length that's close to the scalp may cause some hesitation, but Rez assures there's no need to fret. "It is safe to bleach buzzed hair as long as the lightener used is recommended for both on and off scalp, like Redken's Flashlift Bonder Inside—I say go for it!" he says.

This double French twist creates a fun and futuristic take on a classic style:

This unique downward spike is easily achieved on shorter strands with long layered ends. Using a blend of oil and/or gel, depending on your hair type, will give you clean sections and a sleek finish.

A Hint of Tint

Using shampoos and conditioners with a lower pH level will help keep temporary colors from fading too quickly.

This dimensional butterscotch blonde practically has our mouths watering and is easily one of our most coveted hair colors on Stewart to date.

Bleached brows are a strong statement all their own, but when it comes to getting the look yourself, be sure to seek out a professional. "Bleaching eyebrows at home can be dangerous," says Rez, who does not recommend any at-home attempts on this one.

Using a volumizing mousse to prep your strands will help give hold and body to any tousled hairstyle.

All in the Details

"Small braids can add fun detail to your style," says Boorberg. "Keep in mind that messy looks like this don't need to be perfect," she says, noting the disheveled texture is what gives it that cool-girl vibe.

According to Boorberg, a medium-sized 1" barrel is a must-have tool for re-creating this wavy perimeter. If you have a fringe, Boorberg suggests curling the area separately before using your brush and hairspray to blend and secure into the rest of your curled ends.

To create a similar braided mohawk, part your mohawk section right above the arch of your eyebrows, following along the curvature of the head to add perfect balance and beautiful lines to your style. Braiding your strands under versus over will allow your braid to pop up from the scalp, similar to a cornrow.

If piece-y styles are your jam, we recommend stocking up on Oribe's Après Beach Wave and Shine Spray. A little product will go a long way and it will leave your hair healthy and soft to the touch.

To get a similar, woven-up movement near the roots:

Even shorter lengths can accomplish a French twist. For best results, work down toward the nape in small sections and pin each section closely together.

Stewart's deep side part here is used to provide textural contrast between a smooth, sleeked-down ear tuck and a soft, subtle flat-iron wave.

If you love a good hair flip, as Stewart does, be sure to alternate the directions of your waves or curls for a more lived-in look.

Even when wearing longer lengths, Stewart sports strands curled over and directed toward one side.

35 of Lady Gaga's Most Iconic Hair Moments Over the Years