The Ingredients The Packaging
The Reviews

There are few brand launches I get genuinely excited about these days, and Kosas is one of them. The sleek, L.A.-based beauty brand by Sheena Yaitanes has turned the notion of "clean" on its head and developed a cult following for its sporty-chic aesthetic and innovative formulas. It's latest launch, an AHA-infused roll-on deodorant by the name of Chemistry, is also sporty, chic, and innovative, and naturally, I had to try it out immediately. There are more natural deodorants on the market right now than you could count, but Chemistry—in true Kosasport fashion—wants to be different from the rest. For one, Yaitanes wants to make it clear that she thinks sweating is good for your body, and that the goal here is not to prevent you from sweating, but rather to help your sweat not smell. "Chemistry is not an antiperspirant, which must have aluminum to work," she says. "Instead, we’ve created a specific AHA blend that helps create a pH environment where odor-causing bacteria can’t survive—leaving you fresh, clean and ready for anything." 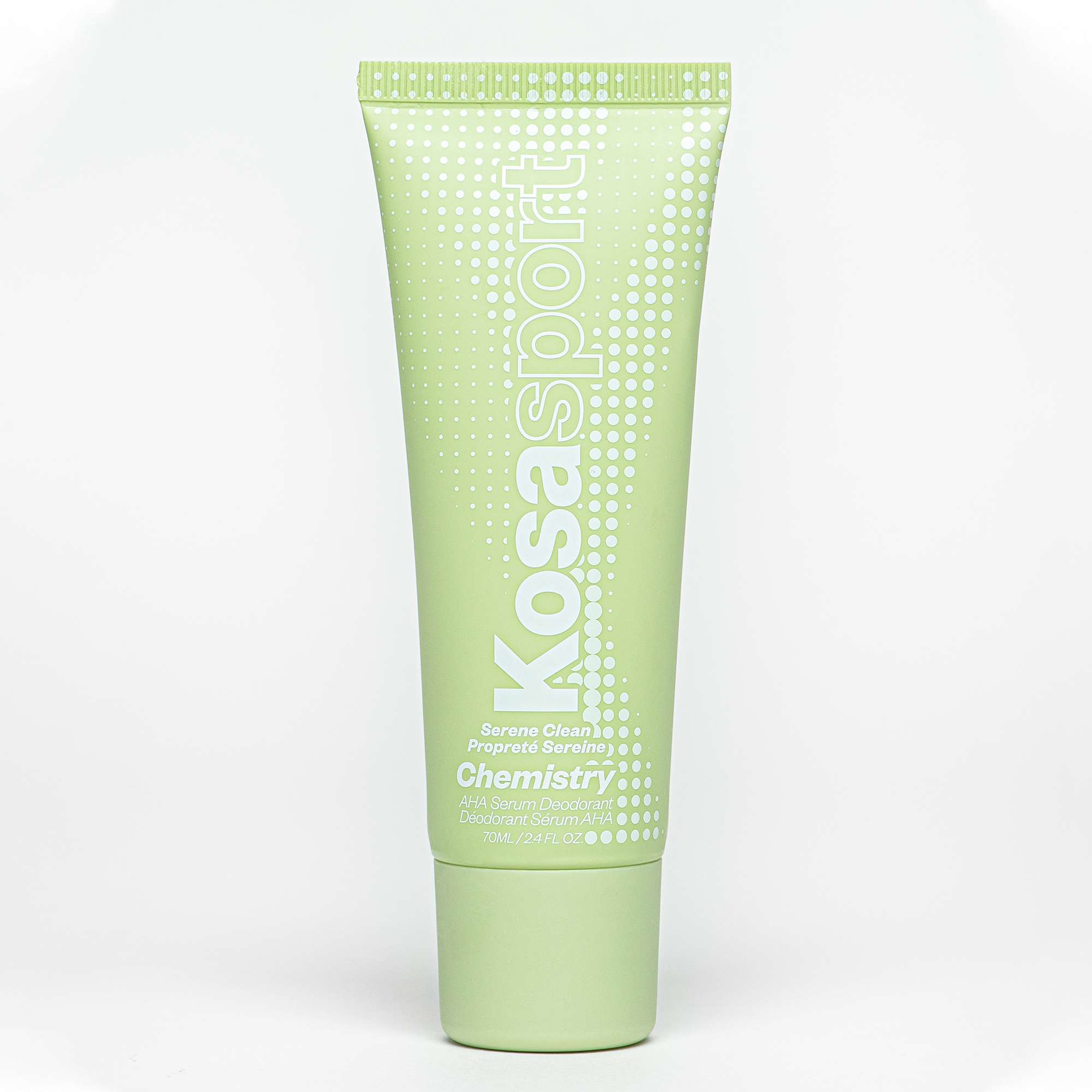 One of the acids in the Kosasport Chemistry Deodorant AHA blend is something called shikimic acid, which has a surprising background. "It's derived from star anise and is one of the raw/preliminary ingredients in making Tamiflu, due to it’s super strong microbial properties, while also being a natural deodorizer," says Yaitanes. "We wouldn't want to put stuff like that on our face, but the armpit is different and emits body odor, making it okay to disrupt whatever the microbiome is that causes the smell." Along with the AHA blend (it's also made with mandelic acid and lactic acid), the deodorant also contains aloe vera juice, hyaluronic acid, and palmitoyl tripeptide-5 to hydrate, soothe, and help your underarms live their best life.

It wouldn't be a Kosasport product without innovative packaging. The deodorant comes in a plastic resin tube (which Yaitanes says is made with considerably less plastic than traditional tubes) and a roller ball tip to help evenly disperse the liquid gel formula. It comes in two versions—Scent-Free and Serene Clean, the latter of which Yaitanes says is "created from a very low concentration blend of orange, Búlgara lavender, haitian vetiver and ylang ylang essential oils for a calming and serene experience."

Packaging aside, does the new Kosasport Chemistry AHA Serum Deodorant live up to its promise for keeping smelliness at bay? As someone who sweats minimally, I used the unscented version and found myself slightly sweaty but 100% stink-free at the end of a particularly hot NYC day. The next day, I tried the scented version and was surprised that at the end of the day, one armpit smelled like B.O. while the other one smelled like nothing. A fluke? An application error? I decided the best course of action would be to ask my coworkers, many of whom prefer heavier-duty formulas and antiperspirants, to give the Kosasport Chemistry AHA Serum a go in the sweltering heat. Below, find their honest reviews.

"I've long heard whispers that acid works well as a deodorant, but my personal investigation of the rumor only ever got as far as a dab of Pixi's Glow Tonic in my pits once or twice. So you can imagine my delight upon learning that Kosas was coming out with an AHA deo, especially during a time when I really don't care when I smell like and I'm open to an experiment. Conveniently, I also began growing my armpit hair out a few weeks ago, providing the perfect ripe conditions for a true test. I swapped in the fragrance-free AHA deo on my way out on a muggy, 87-degree late-June afternoon in NYC and I arrived back to my apartment at 10 p.m. in mild shock. My current natural deo generally calls for two applications per day and leaves me musky. Kosas's AHA deo neutralized almost all traces of odor—I'm not sure I'll ever turn back." - Elspeth Velten, group editorial director

"I've had a few conversations with friends and colleagues about the—ahem—lack of deodorant worn recently. Unless you're working out or have easily offended roommates, there's really no point. But Kosas' new offering actually makes me want to wear it since the formula doesn't just prevent odor, it improves the look and feel of my underarms with its exfoliating and hydrating prowess. Plus, a clear, serum-y formula means there's no room for a buildup of white gunk or streaks on your clothing (something that always happens to me), which is a huge win in my book." - Lindsey Metrus, senior editor

"At this point in my career, it's rare that I'm truly blown away by a product, but Kosas's new deodorant launch is one of those unicorn moments. If you asked me a week ago if natural deodorants work, I would have told you not to waste your money. But with the launch of Chemistry, I stand corrected. While there are other natural formulas that can get me through a day at my desk, none of them have stood the test of getting me through a HIIT class without yellowing the armpit area of my white shirts or making me smell like I'm not wearing deodorant.&nbsp;So once Chemistry survived my 45-minute circuit, I decided to put it to the ultimate test by using the formula while moving out of my Brooklyn apartment on an 80-degree day (with no air conditioning, btw). Chemistry passed with flying colors⁠—I couldn't detect even the slightest body odor, nor did the formula stain my favorite white tee. After a few days of using the formula now, I've noticed that I have fewer razor bumps and itching than usual, and my armpits generally feel smoother. This deodorant is essentially skincare for your armpits, and it gets bonus points for the roller ball applicator (which reminds me of being a tween with a penchant for body glitter)." - Holly Rhue, associate editor

"I love the texture of this deodorant. The serum has great coverage and absorbs into your skin quickly so you don't have to wait too long to get dressed after putting it on. I wore it on a hike this past weekend and was impressed by how long it lasted. I did stink a bit a the end of the day, but not nearly as much as i would have if I used some other natural deodorant brands. I'll definitely keep using this Kosas one." - Kelly Gallagher, senior social media manager

"I am an AHA freak—as in, if they're mentioned in the ingredients of a product, I'm trying it. So when I noticed mandolin, lactic, and shikimic acids were key in the formulation of this deodorant, I was so excited to swipe it on. It's clear, serum-like (a major plus for me because it dries quickly and doesn't leave white clumps), and isn't sticky. So, off the bat I was into it. But, the thing is, I've never used a natural deodorant that moved me away from its not-so natural counterpart. This one does work—it keeps smells at bay, moisturizes with aloe and hyaluronic acid, and is even meant to brighten your underarms (I didn't notice any immediate brightening but I'll give that one more time)—but I still sweat. The thing is, I suppose that has to be okay. At this point, I'm ready to leave behind the deodorants that aren't good for my skin or body and make sacrifices for my own health. In this case, that means a little more sweat than I'm used to. The positives outweigh the negatives for me and I'm going to keep using Kosas." - Hallie Gould, senior editor

"Living in Georgia (where summers are extremely hot and humid), having a deodorant that keeps underarm odor at bay all day is a non-negotiable. Because of this, I’m often trying different deodorants and antiperspirants to see which ones can compete with the heat. Enter: the Kosasport Chemistry AHA Serum Deodorant. When I put the Serene Clean scent to the test, I immediately noticed its lovely light fragrance and how cool and refreshing the rollerball felt. I loved how the deodorant swiped on smoothly, leaving just a thin layer of product on my skin and no sticky residue on my clothes. After knocking out work from my desk and running brief errands, I still smelled fresh. I can definitely say that my pits have been noticeably softer and smoother since I started using it. I’ve been using this formula for a few days now, and plan to keep it a part of my daily routine." - Olivia Hancock, editorial intern

I Reviewed Nécessaire’s The Deodorant And I’m In Love