No Joke: These Korean Stickers Remove Your Pimples Overnight

When I first caught wind of acne stickers, on the surface, they seemed like a farce. Stickers? I thought. What, like Lisa Frank unicorns and puppies that hide my pimples? I was in high school, and I was well-versed in acne creams, washes, and other drugstore potions, so while stickers seemed like a gimmick, I was desperate for results, so I peeled them off and stuck them all over my face.

They were little white circular patches loaded with acne medication—spot treatments in the very literal sense. The idea of them was intriguing: no messy creams or gels involved. However, they ended up singeing my skin—my pimples were much more red and irritated than before, so into the trash they went.

During a recent meeting with Alicia Yoon, founder of Korean skincare brand and curated website Peach and Lily, I was introduced to her take on acne stickers—Peach Slices Acne Spot Dots ($4). As soon as she revealed that she developed a new variation, I had flashbacks to my harrowing high school experience. But just as I was about to dismiss them, Yoon explained that they aren't your typical medicinal patch.

Instead of dispensing ingredients like benzoyl peroxide and salicylic acid into the skin, they absorb the contents of a pimple like a vacuum. The patches are formulated with hydrocolloid, a gel-like wound treatment that absorbs fluids, creates a thermal insulation for the wound bed, and prevents bacteria from entering. Yoon broke down that acne is essentially a wound, so the same principle applies to using a wound dressing to heal a pimple. Plus, hydrocolloids are scientifically proven to help improve redness, oiliness, and sebum in a breakout. 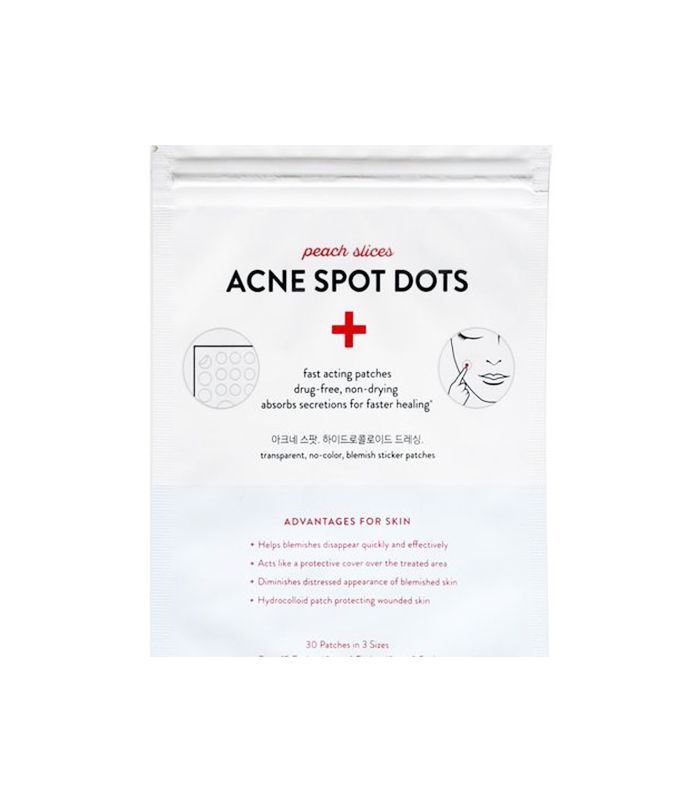 In addition to not having the skin-irritating chemicals of typical acne treatments, these patches are clear and discreet—Yoon says that women in Korea often wear them in public without a second thought. You could even put makeup on over them if you'd like. Instead of wearing them in public, I opted to wear them to bed on a night when my skin was particularly acting up (damn you, menstrual cycle).

The next morning, I was pleased to find that none of the patches had fallen off and that my skin didn't burn in the slightest. If you have a weak stomach, you might want to skip ahead a paragraph, otherwise, I'll tell you that the stickers did, in fact, suck a great deal of pus out of my breakouts as evidenced by the residue left over when I peeled them off. It was satisfying to actually see that they did what they promised to do.

Were all of my pimples completely eradicated? No, but many of the smaller ones were undetectable, and after another night or two of sleeping in the stickers, my skin was clear again.

Byrdie editorial media specialist, Haobin Ye, also loves them, saying, "I like how they come in different sizes, which can be conveniently applied to different spots on my face (like small ones on my nose wing). I apply them before bed and peel them off the next morning. It gets a little itchy in the beginning since the skin gets tighter, but you will get used to it."

What's also great is that the patches can be applied at all stages of a pimple, from the very onset to when it's distressed from having been picked or popped (though we highly discourage picking your skin!). At $4.49 per box for 30 total patches in varying sizes, you can't go wrong.