Kim KW on the $5 Beauty Product She Loves

As someone who was about to interview one of the most recognizable people in the entire known universe, I was surprisingly calm as I walked through South Coast Plaza on my way to Kim Kardashian West's KKW Beauty pop-up shop. The shopping center, which is located in Costa Mesa, is massive. Let's just say, it's large enough for me to require the use of a map (and directions offered up to me by a couple of very kind security guards) to find the site of the aforementioned pop-up. I was told it was situated on the first level, between a Hugo Boss and a Burberry.

I was there to speak with the multi-hyphenate and pop-culture icon about the pop-up shop itself, which was the second one ever created for her cosmetics line, KKW Beauty. The first one took place last year in Los Angeles. Since then, she's grown her eponymous line to include new products, collections, and fans. It's only fitting that the second pop-up should come soon thereafter. So that's where I found myself at 10 a.m., in desperate need of caffeine but not willing to search out any at the risk of losing my spot in an ever-expanding crowd of fans and onlookers.

Soon enough, I was ushered past the growing crowd, leaving excited snippets of conversation in my wake. "Kim Kardashian's in there!" "Do you think we'll be able to get a selfie?" That's to be expected. Her fans are devoted, to say the least. What I didn't expect, however, was how large and interactive the pop-up was, how warm and friendly Kardashian West was, and how naturally our conversation flowed. Keep scrolling to read my exclusive interview with Kim Kardashian West, in which she talks all about her biggest beauty inspirations, her favorite skincare products, and the one makeup product she hates.

After casually finishing up an Entertainment Tonight segment, Kardashian West walked over to me to begin our interview. She thanked me for coming, and then we got down to business. My first question was, of course, how the second pop-up came to be and how it might differ for any fans who were able to attend the first. She told me that there was such an incredible reaction to the first pop-up, which was in Century City, that she just had to do it again.

"[This time] it’s at South Coast Plaza, which is one of the busiest malls in California," she tells me. "We’re just so lucky to be in here, and it’s triple the size, maybe quadruple the size, of the other one." The size of the pop-up is truly significant. It's large enough to house giant KKW makeup products, swirling columns full of the brand's Flashing Lights ($17) powder pigments, and something called the Crystal Cave, which you have to see to believe. "Everything about it, to me, is so beautiful and so on-brand," she muses. "I feel like a makeup artist is truly an artist, and I really do respect that, so I wanted it to look like a big museum." And that it does. Actually, it's even better than that. It looks like a museum built for Instagram photo opportunities.

On Her Favorite Makeup Products

One of Kardashian's newest products is her curated makeup collection, housed in a single book package, called the Glam Bible ($150). It includes a six-pan eye shadow palette; false lashes; mascara; eyeliner on one side; and blush, highlighter, lip gloss, two lipsticks, and a lip liner on the other. It's stocked full of pretty much every makeup product you could ever need. Kardashian West created the bundle in homage to her signature smoky-neutral makeup look.

"It can go from day to night," she explained. "There is a lighter lip in there and a darker lip, so you could spice it up and do a stronger eye and do a darker lip or you could do a more neutral eye and a nude lip. It is pretty versatile, but I wanted it to be something you can buy and just pack that with you … just to have a portable kit of what I would use for my smoky-eye look."

Kardashian's favorite KKW Beauty product of the moment, however, has to be her Liquid Concealers ($18), which she says she's been especially drawn to as of late—especially for the purpose of concealing her under-eye area. "I’ve always been a big fan of my concealers. Everyone seems to really like them. How I usually do my under-eyes is a three-step process. I conceal, bake, and brighten." After asking her to explain her process (as I'm someone who struggles with stubborn dark circles and is always looking for an effective makeup remedy), Kardashian West went into more detail. "I’ll do the concealer, set it with the baking powder, let that sit while I do my eyes and the rest of my makeup, wipe it off, and then do the brightening powder right at the end. If there's one product I can’t live without, it’s definitely the brightening powder." 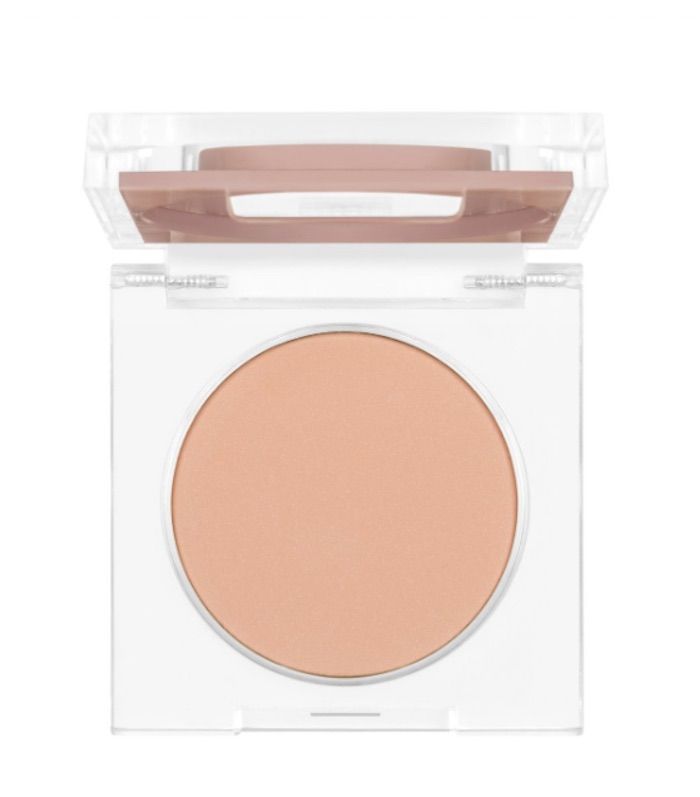 On Her Biggest Beauty Inspirations

Kardashian West is a beauty icon for millions of people around the world (myself included). That's a fact. However, icon or not, everyone has someone else they turn to for inspiration. I was curious to know who that was for her. "I definitely look at beauty icons. To me, my favorite for inspiration—for hair and makeup—is Cher and Naomi Campbell. They have never gotten it wrong. It’s been decades of amazing looks for both of them. They’re just so beautiful. But then I like to try new things myself. I like to be innovative and let [makeup artists] be experimental," she says. This makes sense considering she has begun to play with color and texture more often than she has in the past, using products like her Ultralight Beam Duo ($32), which has a super-shimmery finish.

On Her Nighttime Skincare Routine

Kardashian West is known for her outstanding makeup looks, but she also has nearly flawless skin beneath that. I wanted to know what products she relies on for cleansing and maintaining her clear complexion. While she admits that she's tried out so many products, she does have a current routine.

She starts by removing her makeup, which she does with Neutrogena's classic Makeup Remover Wipes ($9). "It really does get all the makeup off," she says. Well, except for waterproof mascara, which I was happy to learn that we both abhor. "I absolutely hate waterproof mascara. I was just thinking about it. I would rather it run down my face than the angst of taking it off. No makeup wipe can get that off," she shares. After cleanser and toner, she reaches for a serum, Vitner's Daughter Active Botanical Serum ($185), to be exact. "It's so good," she beams. "That’s my favorite right now."

"Then I need a thick, thick moisturizer for night," she continues. In the past, Kardashian has made it known that she uses La Mer's Crème de la Mer Moisturizing Cream ($90). If she doesn't have a spray tan (oils can make spray tans fade more quickly than they ought to), she'll reach for a facial oil. When I asked her what face oil she's using right now, she pursed her lips and looked skyward in a very relatable I-can't-believe-I-forgot sort of way. "Oh, shit. It’s this rose oil by… I’m blanking on the name. It’s in a silver bottle. God, it’s gonna kill me that I don’t know the name of it. I love the scent. If I love the scent, then I love the face oil."

While I can't be sure exactly which face oil she uses, I must recommend Sisley Paris Black Rose Precious Face Oil($235). It's expensive, but it's well-loved by beauty editors, celebrities, and influencers alike thanks to an ultra-hydrating and nourishing formula.

Fifteen minutes was all it took. I was able to sit down and ask Kim Kardashian West all of my burning beauty questions, get an inside peek at the KKW Beauty pop-up, and I was out. Only then was I able to finally track down a coffee and reflect on the experience. If there's one thing I verified from meeting Kim K. IRL, it's that she truly is the beauty authority I suspected she was. Not only is she knowledgeable about makeup as a beauty CEO and celebrity, but she's also open to experimenting with new trends—like neon makeup, which she specifically mentioned—and skincare.