Calling Kim Kardashian West a businesswoman is like calling the ocean a body of water; true technically, but a gross understatement nonetheless. Yes, she's a businesswoman—she's the owner of a successful personal app and the Kimoji business, and she's the creator of a namesake makeup line that sells out every product it produces in minutes. But with her reach and ubiquity, the term mogul feels more fitting. And moguls have their own set of stereotypes, usually perceived as notoriously cutthroat or icily detached. Yet the person speaking to me on the phone is warm, soft-spoken, and surprisingly affable.

We've connected to discuss her newest KKW Beauty launch (five shimmery highlighting powders and corresponding holographic lip glosses), but two minutes into the call, the conversation has shifted over to her daughter North's obsession with YouTube makeup tutorials. Kim laughs like any mother would over her daughter's burgeoning obsessions, seemingly rueful but bursting with pride. "We're already planning next year's Halloween look," she tells me. "Right now she's really inspired by Sally from A Nightmare Before Christmas. So she might be inspired to do that kind of look. It will change 500 times, but so far, we're stuck on Sally's makeup."

Throughout our interview, I can't help but observe how nice Kim is in a way that feels completely unmanufactured. She laughs easily, gets excited when remembering a nostalgic beauty product, and seems genuinely passionate about the new makeup she's creating for her millions of followers and fans. ("It just seems like there's so much going on with Black Friday and Cyber Monday, and I'm just like, ahhh can it all be over so I can just launch my new products!" she tells me with the excitement of a kid on the first day of school.)

Kim Kardashian West is a millionaire mogul who's supremely poised and physically beyond flaw (this is the woman who brought contouring to the masses after all), but she's also gracious and, dare I say it, strangely relatable. Plus, I ended the call with the strong, fervent desire to purchase every single one of her new highlighters and glosses—proof the KKW effect is still very much real.

Keep scrolling to find out everything you need to know about the new KKW Beauty launches and more.

BYRDIE: Tell me a little about the inspiration behind your new highlighters and glosses.

KIM KARDASHIAN WEST: I know that I've kind of stuck with skin and did my contour, but I really wanted something glitzier for the holidays, and we had been working on these for a while. So, I was like, let's just do it. They look so good, and I've been using them so many different ways.

KKW: Mario actually taught me to put the highlighter in moisturizer and just put that all over my skin just to give it a glow even under my makeup, or just when I'm not wearing makeup and just do that. And then we use the highlighter as a shadow in the inner corner of the eyes, down the nose, or on your cheeks. Then you can also wet them, and then they look really intense, which I love, if you wanted to use it maybe like more of a shadow. Or you can make it even more intense and do the lip gloss on top, which looks really pretty and just really glitzy.

BYRDIE: How about the glosses?

KKW: The glosses are more of a sheer glitz. They have the tone to them and speckles of the glitter and the pigment in it, but overall they are more of the sheer gloss, just kind of to make it look juicy. Like, when I'm at home and I don't really want to have full makeup on, or even if I have like a really intense eye, I don't want a big intense lip. So I just want something that kind of goes in that vibe and looks really pretty, so that's why I kind of wanted the glosses to be a little bit more sheer and just juicy.

BYRDIE: I noticed you keep saying the word "glitzy." Is that a new thing you are trying, or a look you've always loved?

KKW: I've always loved it. I mean, for holidays, for regular, even if I do a more muted eye, I always add a little bit of the highlighter and shimmer in the inner corners of my eyes and under the brow bone and just on the eye. I've always done that. Even my bronzy look, I'll have a bronzer or gold shimmer added to it. So it's not a real departure from the contour and the skin that I've been doing… I think it's my version of glitz and color makeup. Because it's still pretty muted. You can stick to your skin tone, and it just makes you glow. I think it's just to enhance, and it's not really crazy color.

BYRDIE: Do you have a favorite shade out of the five?

KKW: You know, with my lighter hair, I've been using the iridescent. I wore it to my fragrance launch kind of to give me a little lighter eye. But I love the bronze and the gold and the yellow gold. Those colors really pop. The rose, actually, is really pretty. I know, it's hard, I'm pretty much naming all of them, but the rose, depending on your skin tone.

BYRDIE: These new launches look like they are more holographic and could fit into the current "unicorn makeup" trend. What are your thoughts on that?

KKW: To me, because I do watch tutorials that my daughter watches on unicorn makeup, I think unicorn makeup probably has a bit more glitter in it. My pigment is super fine. The lip might have a little bit of glitter in it, but like I saw something a couple days ago on unicorn makeup and it looked really pretty. And I was like the name "unicorn makeup" just made it sound kind of young and not that serious. I think [the highlighter and lip gloss] are super beautiful and enhance just your glow.

BYRDIE: What are your thoughts on the glossy eye makeup trend?

KKW:  I just did a glossy eye actually, and it did not show up in the pictures, and I'm so pissed that I did not take a better picture up close because it was so good.

BYRDIE: Any tips for keeping a glossy eye from creasing?

KKW: You have to just put it on the last minute. You do the eye, you do everything, and then you just put it on, and it will eventually crease. The key is not to put it on your under-eye because it will make the mascara run and then it will go into your concealer and kind of mess everything up. But the key is to really put it on top of the lid and not underneath.

BYRDIE: Do you have a favorite memory associated with lip gloss?

KKW: Oh my god, my favorite lip gloss back in the day was Bonne Bell and it was a color called Cappuccino. I cannot believe I just remembered that name. I have to get it. [to someone in the room: "Will you write it down to go get it?"] Oh my god, I have to get it. I can't believe I just remembered that name. Yeah, I mean, I stole a lipstick once from Rite Aid. A Revlon lipstick, and I mentioned it once. Nicole Richie and I must have been like 7 and 8 or something, and we were in Malibu and stole a lip gloss from Rite Aid. We didn't get in trouble, but I mentioned that and then Revlon sent me a whole thing of lipsticks and was like, "You don't have to steal anymore!" [Laughing.]

BYRDIE: How did you wear Cappucino?

KKW: Probably with the darkest MAC lip liner. I was obsessed with a really dark lip liner. 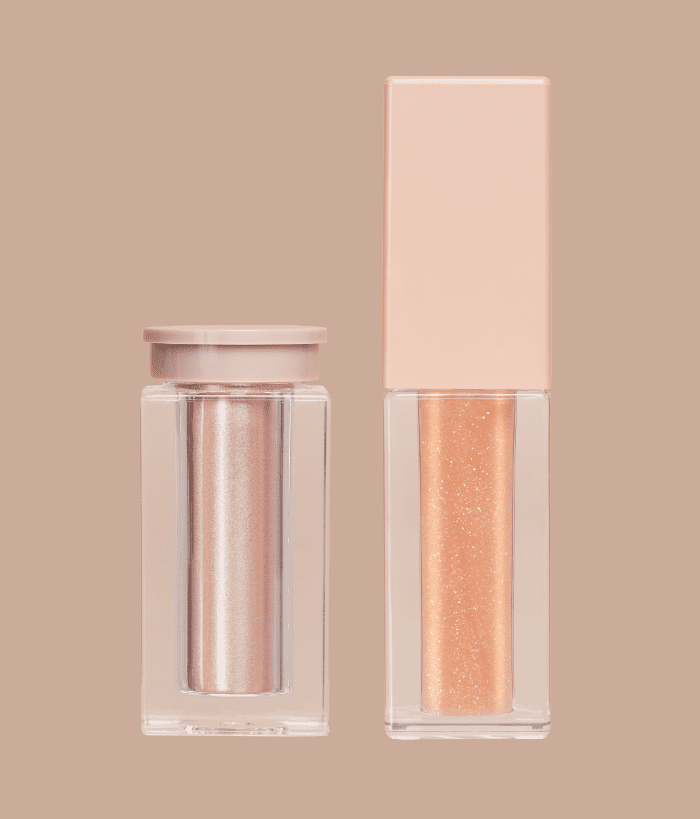