There are some celebrities who we admire from afar, swathed in an aura of mystique and speculation. You might know what designers they wear on the red carpet, but you don’t know where they go to eat, who’s in their group text, and what keeps them up at night. Wherever this type of celebrity is, Kim Kardashian West falls squarely on the opposite side of the spectrum. West ushers in the epoch of a new type of fame—one that’s still aspirational (a 24/7 glam squad and Balmain-filled closet is still considered unattainable for most), but seemingly unguarded and even at times, relatable. Her life plays out before us in neatly-packaged episodes each week that make us feel like we know her—or, at least, the on-screen version of her. And for those moments in-between, we feel involved in the day-to-day of her life via her Instagram, where she documents moments both mundane and exceedingly extravagant. Her 151 million followers would agree: to follow Kim Kardashian is to know Kim Kardashian.

And yet, she still surprises. I’m aware of this fact when I meet up with her at the Ulta Store in New York on 87th street, where she’s arrived to celebrate the launch of KKW Beauty at the behemoth beauty retailer. Physically, she’s much smaller in person than I expect, even in strappy 4-inch stilettos. Energy-wise, her presence is that of someone twice her size, though not in a loud, boisterous way. Instead, West glides through the store with an air of calm serenity as she examines the KKW Beauty endcap carefully, murmuring about lipstick names to her makeup artist Mario Dedivanovic. “This is so exciting to me because I love my formulas and I’ve worked really hard on them,” she says, when I ask her how she feels about KKW Beauty being made available at Ulta for the very first time. “It’s amazing to me that my customers can just come in and feel it and touch it and make decisions for themselves.”

As a crowd grows outside (West announced the exact store she’s at on her Instagram Stories just moments before, and even promises she'll give makeovers, much to her followers’ excitement and her security team’s dismay), we discuss her secrets to success and career advice to budding entrepreneurs. In her case, it involves waking up at 5:40 on the dot every morning, micromanaging her life, and changing her email without telling anyone (honestly, a baller move). Mother, mogul, millionaire—you can call Kim Kardashian West a lot of things, but "slacker" isn't one of them. Ahead, find out Kim Kardashian-West’s secrets to a success.

“[Kylie and I] definitely give each other advice all the time. Kylie would probably give me advice when I’m talking about a specific product and I can’t make a decision between something—she’s usually really decisive on that so I can ask her. She asks about business advice—I feel like I’m the family publicist at times. We’re always calling each other for stuff.”

“When I was in my early twenties, a lot of young people were just concerned with going out and partying and drinking. I do believe that a lot of success is due the fact that I’ve always been in control of my lifestyle. I’ve always been really committed to something. I definitely think that it can be discouraging. It can be exhausting. But you really do have to put the time in and put the work in. And really just stay focused.”

3. Keep a positive attitude, even if it’s not your dream job

“I worked at a clothing store, at a kids clothing store, at my dad’s office—I worked so many different jobs. I remember my dad always saying to me: no matter what that job is, do your best at it. Because you don’t want to go into someplace with an attitude where you know it’s not their dream job—you know they’re just trying to get by. You should always just have a good attitude about things, no matter where you go.” 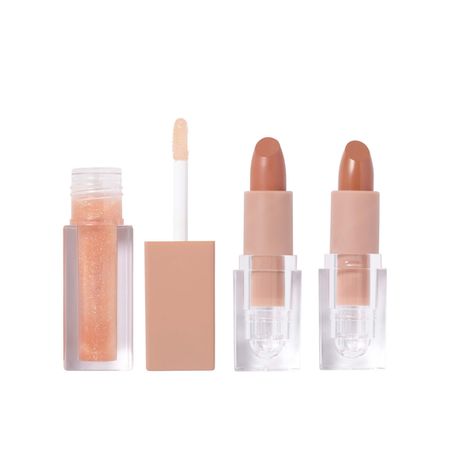 4. Make a game time decision—and stick with it

“When I come into a crisis with something, I just make a quick decision and stick with that and not harp about it. It can be something really small. I remember I did a collab with Kylie and the lip color of the nude that I wanted for the bottle wasn’t the exact color I wanted. They said they messed up, it’s our fault , we’ll pay for it, and I said, you know what, for the environment, it’s probably better to not reproduce this. And no one noticed that I wanted a slightly different color. At the time I was freaking out and thinking, oh my god, this is so stressful. You just can’t let your mind go there. Just make a quick decision—this is okay, this color isn’t perfect, but it’s going to be okay for us, and let’s move on.”

“It just means that every moment of the day is accounted for and that I have it all managed to the millisecond of what I’m doing. This weekend I went to Palms Springs with my friends and I was like, all I really want to do is just sleep in. I’ll probably wake up at 7. I just wanna sleep in and have no restrictions. And I woke up at 7:38 am and looked at the clock right away and was so excited.”

6. Give yourself a break

“I think it’s also taking those breaks when you need them. Especially for the younger generation where social media is a huge part of business. You definitely have to still separate that and take mental breaks and pay attention to what’s going on and separate yourself when it gets too overwhelming.”

“I changed my number and I changed my email recently. Just because so many people were reaching out to me for different things, whether they wanted my product or to get lunch. I literally just had to call all my best friends and say, you guys have my number but I’m changing it for everybody else. So do not give it to anyone! I don’t care if you think I’m friends with them. I have to set a boundary. I have to get through law school and then I’ll re-emerge if I feel like that’s what I want to do. I really was forced to make some changes…I just had to set my perimeters and boundaries and stick with that.”