By now, we don’t need to review the power of celebrity in the beauty space. Pairing stardom with beauty is more commonplace than ever, and shows no signs of stopping. Where once, celebrities were expected to simply have their name attached to a fragrance, we now see them creating makeup, hair, skincare, and supplement brands.

What I’m more interested in is a celebrity’s power in proximity to beauty. What happens when the general public gets wind that their favorite celeb likes a certain product and then clamors to get it? We saw this happen with Audrey Hepburn and Givenchy L'Interdit, as well as Princess Diana and Quelques Fleurs. These celebrities may not be officially pushing the scents, but simply knowing they wear them is enough to move units.

As it tends to do, history is repeating itself with the fragrance Love, Don’t Be Shy by Kilian. 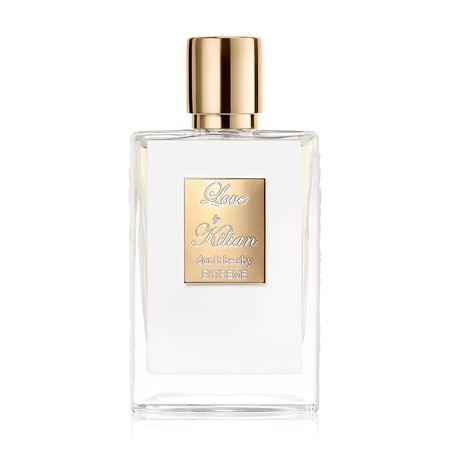 Released in 2007, it is by no means new, and has always been a top seller in Kilian’s vast collection for nearly 15 years. But in the last year or two, news broke that it was a favorite of everyone’s collective muse, Rihanna, and it sold out almost immediately.

I don’t find this altogether surprising as it’s well known that one of Rihanna’s many talents is moving product. It’s just that Rihanna herself has never once spoken about or endorsed the scent. Yes, it’s been confirmed by many of the people closest to her, but we've never heard it straight from her lips. There’s not even shady screenshots of the bottle on her vanity or anything. It’s all still technically hearsay. And yet, because of Rihanna, Kilian can barely keep it in stock.

With the recent resurgence (Rih-cent Rih-surgence, sorry) of Love Don’t Be Shy, Kilian decided to do what all beauty brands do when something is hot: franchise it. You like Nars Orgasm Blush? Here’s a whole Orgasm collection. You like Becca Champagne Pop highlighter? How about an entire line of the same shade in different formulas. Oh you like Urban Decay's Naked palette? Here’s the same palette in ten different colorways.

In fragrance, the way this is often done is with flankers. To review, a flanker is a new version of a scent that people love, where the notes have been reworked and the bottle or juice may be updated, but it’s still similar enough to the original scent for people to recognize it and fall in love all over again.

Take Marc Jacobs Daisy for example. After Daisy’s massive success, we soon saw Daisy Love, Daisy Dream, Daisy Blush, and so on. Flankers are great because they take something that people already love and expand upon it. They’re also great because along with the scent, they have the name recognition of the original, and people tend to gravitate toward what they already know.

Love Don’t Be Shy Extreme is the first flanker of the wildly successful fragrance, and I would also think, a response to some of the feedback that the original received. The first Love, Don’t Be Shy is very sweet, and makes no apologies about it. While it’s not cloying or cavity-inducing, it’s sweet for the sake of sweetness with notes of caramel, vanilla, sugar, and musk that sing throughout wear. The heart of the scent includes many florals, with top notes of citrus and pepper. These do nothing to mute or temper the saccharine scent, they only to give it space to breathe and make it smell like a humid fog of cotton candy on your skin. While it may not be for everyone, if you like sweet, it’s probably for you.

Where the original Love Don’t Be Shy hung its hat on the caramel note found in its heart which was fleshed out by floral notes like orange blossom, jasmine, honeysuckle, and iris, Extreme removes the caramel completely along with its floral counterparts and replaces them with an overdose Bulgarian rose. The “crystallized floral” aspect, as the brand refers to it, does feel a little more glassy than your average floral note, perhaps less earthy and more laser focused on the essence of rose. The original is a beautiful, heady sweetness, where the Extreme is a little more shimmery, more carbonated.

Extreme will be familiar to those who wore and loved the original, while being a little more approachable to those who are intimidated by fragrances that lean so sweet. On my skin and to my nose, the two scents are strikingly similar. The addition of rose in Extreme is noticeable, yes, but it does feel like a more nuanced edit than a full reimagining, which I can appreciate. Many flankers often feel like a new scent entirely under the same name of something else that was originally very successful, but Extreme shows you where it started and where it wants to go.

What I like most about it is that it didn’t bastardize its original concept for the sake of paletteability to a wider audience. It is still sweet, and still very much still in the Love Don’t Be Shy family.

If you love the original, you’ll probably want to smell Extreme, but depending on your tastes, you may not need to buy it. It expands on its original thought without changing direction completely, which will please some and may not be quite enough for others. The integrity of the original is still there and, the differences, while being nuanced, are noticeable. I think it's a really exciting take on flankers, franchises, and sticking closely to what you know.

The beauty industry is largely fueled by scarcity and newness. The scarcity of the original Love, Don't Be Shy brought about the newness of the Extreme, and if history is any indicator, this scent is about to be impossible to get your hands on, even without a celebrity name attached to it (officially.)

Smells Like Trouble: Pouring One Up With Viva La Juicy Le Bubbly