"Good morning, darling," Katy Perry purred to me over the phone. We were set to discuss her new fragrance, a massive departure from previous offerings, she tells me. "I like to keep people on the edge of their seats in every capacity, even with their sense of smell," Perry offers. "What is she gonna do next?” she says with a laugh.

Her tone, while familiar and relatable, was more business than I expected, a product of the number of interviews she's done just like this one, I suppose. "Surface glamour underpinned by a hint of down-to-earth realness is very much Katy Perry's MO," The Guardian wrote, "and has been since she emerged almost a decade ago with the global hit 'I Kissed a Girl.'" Though, now, it seems like Perry has decided to turn down the froth and push the realness dial way up. With the drop of her fifth studio album, Witness (a record she calls "purposeful pop"), a substantially new 'do, and a seasoned understanding of the media, Katy Perry is ready to do things differently.

"I'm trying to redefine what beauty means to me," Perry tells me. "For instance, the biggest experiment I've done is cutting off all my hair. Now I can't hide behind it. I wanted to know that I could still feel beautiful and love myself without it. It's fun, it's freeing, it's liberating, and I don't think that 'sexiness' and 'femininity' is just one thing—long hair. I suppose the goal is to redefine what femininity means to me. I like to throw that kind of curveball into whatever traditional beauty is. Plus, with the new hair, I get an extra hour back for myself every day."

It doesn't have to be for one particular woman. I think there's something beautiful in the differences.

It's clear with her new look has come a new era in the pop star's life. Perhaps it's cliché to say so, but she does seem freer. During a 96-hour live stream ahead of the release of her album, Perry chose to open up about the choice to cut her hair and how it was tangled up in her mental health. "I was letting go of this thing that I created, which is a more exaggerated version of me," Perry told Today.

"I spent the weekend at the beach," Perry told me with a wistfulness in her voice, when I asked about the last self-care practice she indulged in, "and the salt water is the most healing thing. Getting into the freezing ocean is so simple and something I've done hundreds of times, but it heals you. It's a free way of connecting. I like to do meditation, too; it's something I've been swearing by for years now. I just started my yoga life. In my 20s, I didn't understand it; I thought it was slow and boring. Now in my 30s, I'm like,'wow, this is amazing.' It makes me happily present."

It's the same newfound self-assuredness, or perhaps more of an acceptance when she's not self-assured, that defines Perry's new era as a woman in the public eye. Her decade-long tenure has been accessorized with vintage glam, pin-up costumes, and flashy performances. Now Perry is attempting to show the world a more 360-degree view of the human beneath the sparkle.

"I've done quite a few of them so far," Perry says when I ask about her new fragrance, Indi, "but this one's different. I wouldn't call it unisex—I mean, people can call it what they want—but I would say it's more androgynous than my other scents. It has 11 different musks that give it a really bold, strong, but not overbearing scent. Then the vanilla and oriental plum come in, and they cut [the musk]." Like Perry's pixie, the bottle isn't as traditionally feminine, either. "It's clean, modern, and streamlined," Perry says. "It's a bit like the opposite of what I have done in the past, which is nice. Because it's less on-the-nose feminine, it's more open to interpretation. It doesn't have to be for one particular woman. I think there's something beautiful in the differences."

The biggest experiment I've done is cutting off all my hair. Now I can't hide behind it. 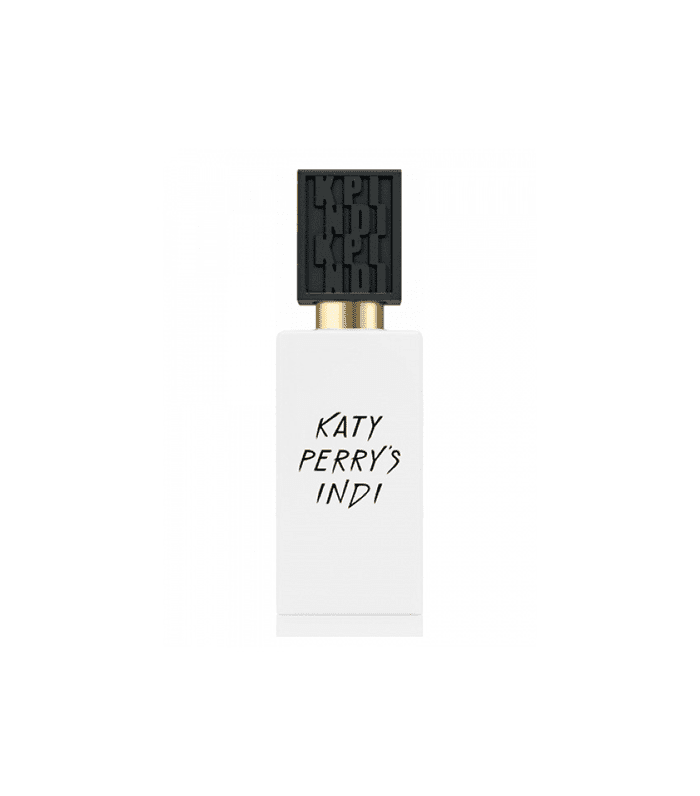 I asked why she decided this was the time to launch a less gendered fragrance, and if it was a pointed choice as someone who is open about her frustration with the current cultural and political climate. "Yes and no," she told me. "A lot of the people who have always liked my music and perfumes have been male. So many have asked me, 'when are we gonna get something of our [own]?' I thought, 'I don't know exactly how to do that or speak for you on that, but I'm going to try.' This is my own interpretation."

She went on to explain how this same theme runs through her other projects as well. For example, her new Covergirl collection features a black lipstick and other unconventional shades and textures. "Everybody was wearing it and loving it. I like to throw a curveball into what traditional femininity is."

The conversation then took a turn to beauty treatments and products. "I use Shu Uemura Balancing Cleansing Oil ($69) every night to take off my makeup—it takes everything off. I was introduced to it by Madonna's makeup artist. I was really adverse to oils because I was having adult acne issues. I thought oil was the last thing I needed. She looked at me and said, 'trust me, Madonna has used it for years.' I haven't put it down since. It's been my game changer."

We discuss vampire facials, a Kardashian-approved treatment that looks terrifying but is popular among beauty diehards. "I'm really interested in the whole 'people taking blood from you, and then making a facial out of it,'" she told me. "I haven't done it yet because I've been too scared. But I do love doing a vitamin drip. I've done that a few times, even right before the Met Ball, and I felt like a superhero."

I like to throw a curveball into what traditional femininity is.

We chat about whether all these treatments, while helpful for our wellness and the health of our skin, are detrimental in the long run. Perry thinks our society's addiction to technology is the real culprit.

"I think we're losing our minds being so connected to our phones. We're headed into a dangerous situation with young people, having to keep up with appearances and our dwindling attention spans. Look, I'm as addicted to my phone as anyone else, but it's an issue. Do you remember a time when you could leave your house, tell your friends when and where you were going, and have to meet them there at that exact time?"

Long story short, she says, "I'm bracing myself for whatever's going to happen because of this 'connection.' You know, I heard about Kanye West giving up his phone two years ago, and I was like, 'how did he do that?' and now I think, 'Kanye's always been thinking years ahead of everyone all along. An innovator.'"