K18's Repair Hair Mask Is About to Be the Next Olaplex

Hailey Bieber's a vocal fan, too.

How It Works What The Pros Think
My Review

The first time I colored my hair, the year was 2003 and I was desperate to replicate the blonde highlights Lindsay Lohan wore in Freaky Friday. By some divine miracle, my mother allowed me to get some subtle ones, which she did herself—with a '00s era pull-through cap. In the nearly 20 years since, I've been subjecting my hair to tri-monthly highlights, albeit by a professional. Through the years, one thing's stayed the same: The damage invariably done to color-treated hair with every session. Every brand out there has scores of products specifically designed to help heal and protect damaged hair, but few do much beyond adding some (much-needed) moisture to ends. But then again, none of those products are scaling down to the molecular level like K18 Hair.

You may have seen the bottles, simple in design but adorned with a trademark strand of molecules, perched on the shelves of celebrity colorists in shared Instagram shots. The brand is spreading through the industry's most trusted professionals like a rumor, and with good reason: biomimetics, or essentially manually replicating a process found in nature. Through that framework, K18's line of products—particularly its celebrated Leave-In Molecular Repair Mask ($75)—actively repair damaged hair, collecting plenty of diehard fans in its wake. 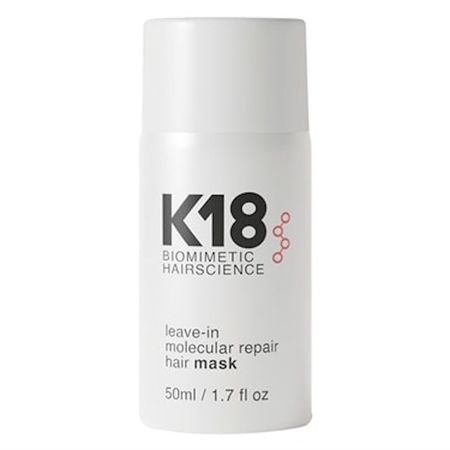 When you see a single piece of hair break off, there's more snapping than just the physical strand. Hair is made of polypeptide chains (keratin), and those, the building blocks maintaining hair elasticity and integrity, are also weakening and breaking. That results in visibly damaged hair in the way we traditionally think of it (split ends, damage-induced frizz), those harmed peptide chains are also contributing to dull, limp, and lifeless hair, too. The K18 team, after nearly 10 years of research and lab testing, managed to locate and isolate a single sequence that can help significantly repair and mitigate that damage for restored, healthy, and altogether lush hair.

K18's patented K18peptide effectively fills in the broken polypeptide chain, reconnecting and bonding it. Hair accepts this artificial repair as natural, and hair is improved in more than just a cosmetic sense. "It helps to keep my client’s hair strong during and after a service so I'm able to get as creative as I’d like behind the chair without the worry of breakage," says Aura Friedman, K18 master stylist and celebrity colorist for the likes of Zoë Kravitz, Natasha Lyonne, Emily Ratajkowski, just to name a few. Plus, she adds, "The K18 Mask actually helps to seal in tone and prevent color fade so my colors are lasting longer than ever before."

What The Pros Think

As is the case with so many of the best products, K18 was something of an industry secret before making a splash with consumers. Douglas Cornwall, known as Discolourist in his position as Treehouse Social Club's master colorist, says he figured it was all hype. "I steered clear at first. It wasn't until another colorist—whom I respect immensely—spoke to me about it [that I gave it a shot]. Plenty of companies tout their achievements but when a skilled artist promotes a product (and aren't being paid to), you know it's the real deal." And so real was this deal that Cornwall says he's now incorporating the treatments into every color service at the salon—"I didn’t want to offer it à la carte because if you color treat your hair, K18 is a must."

Though she's affiliated with the brand, it's clear Friedman would use the product either way. While a lot of formulas claim to tailor to different hair types and textures, she says, ultimately the internal, molecular systems are the same. Rather than superficially treating things like moisture levels with conditioners, the peptide-fueled K18 is fixing damage from the inside out. "I use the K18 Mist (ed note: pro-use only) prior to each color service to ensure I have a healthy canvas to work with," Friedman details, applying the Mask just before toner (it balances the porosity of the hair so the toner or glaze pulls really evenly and doesn’t grab more in damaged areas, she says) and again on towel-dried hair before styling.

And while she's not technically a professional colorist, Hailey Bieber has logged more hours in the salon chair at age 2TK than most will maybe ever—and her rave review of K18 is pretty telling. "My favorite hair product right now is this product called K18," she shared with Refinery29 earlier this summer. "It's so good; I use that all over my hair every time I get out of the shower."

No punches pulled here: The K18 Mask is the most effective hair mask I've ever used, and I've cycled through a lot of treatments over the years. The first time I used it, I was not impressed, though—which is why the instructions explain to use it six times consecutively before dropping down to every three or four washes for maintenance. Click over the brand's Amazon shop and you'll see just a few dismissive comments that usually reveal the user's applied it just once.

Around the third application, you notice the biggest difference in touch-ability. My hair has one annoying patch near the crown that's usually a snare of tangles no matter how much shea butter I work into it (the result of years of bleaching). Usually, it requires more than a few spritzes of my beloved It's A 10 Miracle Leave-In ($38) to work through the ever-present knot post-shower, which can leave me looking a bit greasy thanks to its rich formula. After K18, though, my brush practically sailed through that patch.

One of my features is how lazily this mask can be applied—no heat or wash-out required. After shampooing, skip your conditioner and layer this down the lengths of your towel-dried hair. Wait four minutes, then proceed to dry or style as usual. The shower speaker I stuck to the wall expressly for timing in-shower masks and conditioners (two Nicki Minaj songs and rinse!) is now basically decorative.

The only hesitation I can think of over this mask is the price, which is admittedly steep for such a small bottle. While the brand does offer a $12 sample-sized tube, it helps to think of the overall cost like clothes, in a cost-per-wear sort of way. I have what most consider long hair and, at my current rate, it looks like I can extract a total of nine to 10 uses out of the bottle. Cornwall agrees on the price point, sharing that it's the most expensive item he's ever sold at the salon but he stands by it even for tighter budgets. "The amount of repair and moisture hair acquires from K18 treatments supersedes an arsenal of mid-range products attempting the same results," he explains.

If there were ever an excuse to splash out, a science-backed (and pro-loved) treatment definitely seems like one to take.