Julie Is Making Emergency Contraception Accessible in All 50 States

To put it frankly, this year hasn’t been particularly kind to people who can get pregnant. With the overturn of Roe v. Wade in June 2022, abortions became effectively illegal in 13 states. Millions of people in the US lost their ability to have an abortion, leaving them to remain pregnant regardless of their age, financial standing, or desire to be a parent. Condoms, IUDs, hormonal birth control, and various other birth control products are still options in preventing unwanted pregnancies—though many states are trying to reduce access to those, too—but none of them are 100% effective.

Enter Julie, a new healthcare brand that believes that everyone deserves easy access to emergency contraception without stigma, fear, or anxiety. The brand states, “We aspire to reduce the roughly 48% of pregnancies in the U.S. that are either mistimed or unwanted,” which is why their morning after pill is landing on the shelves of 4500 Walmart stores over the next two weeks.

Julie contains emergency contraceptive Levonorgestrel 1.5mg, an FDA-approved, progestin-only emergency contraceptive. In short, Levonorgestrel works to prevent pregnancy after unprotected sex by temporarily delaying or stopping ovulation. It’s the drug commonly referred to as the “morning after pill,” and Julie provides the same treatment as Plan B One-Step. According to Planned Parenthood, you’ll want to take it within 72 hours of unprotected sex (the earlier, the better) to lower your chances of pregnancy by 75-89%. (Note that Levonorgestrel does not abort fertilization that already took place—it only works to prevent pregnancies.)

Since the drug temporarily delays or stops ovulation for a short period of time, the company asserts that “no matter how many times you take it, Julie does not impact the ability to get pregnant in the future,”—especially if pregnancy is something that you can see fitting into your life down the road. On the other hand, since it only delays ovulation temporarily, you’ll want to talk to your OB/GYN or doctor if you’re looking for a birth control method that you can take regularly. 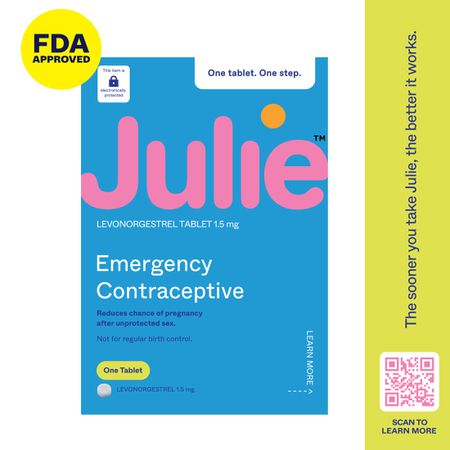 Regardless of what the legal outcomes look like in your state once Roe v. Wade was overturned, Julie is available for purchase in all 50 states, making it accessible to people who otherwise wouldn’t be able to find a solution to an untimely possible pregnancy. And unlike in years past, you won’t have to jump through any hoops to get your hands on this medication—no prescription, ID, or credit card is necessary for a discreet purchase of Julie's emergency contraceptive.

Julie also created a one-for-one donation program. With every purchase of their emergency contraceptive product, the brand donates a morning-after pill to organizations that help people in need or with limited access to healthcare. The brand states, “With a one-for-one donation program, we hope to become the largest donor of emergency contraception in the U.S.”

Julie will be available for purchase in 4500 Walmart locations within the next two weeks and is currently available for $43 on Walmart.com.