written by
Sarah Y. Wu
Sarah Wu is a contributing writer for Byrdie. Previously, she was the beauty features editor at Teen Vogue. Her writing has appeared in Forbes, Refinery29, and more.
Byrdie's Editorial Guidelines
Sarah Y. Wu

Anyone that’s ever met me knows that I have a passion for baked goods rivaling how most people feel about their significant others. My camera roll contains more photos of lovingly frosted cakes and homemade chocolate chip cookies than it does of my own face. Despite this, I don’t eat much sugar. What I enjoy most is the process of baking, the all-important act of documenting my baked goods for the ‘gram, and distributing the delicious results with my friends. People have been known to leave in the middle of the work day to get their hands on a pan of my peach lemon bars, so things rarely even sit in my kitchen for an hour before they disappear.

For a number of reasons, that changed recently. I was stressed, and my stress told me to go eat the many pastries I baked. (This did nothing to help my stress levels, for the record.) I fully believe in feeding your body what it needs and I love food, but my nonstop sweets consumption just felt mindless. Eating high amounts of processed sugars causes the body to release the neurotransmitter dopamine, resulting in more cravings. I was definitely experiencing this, but I wasn’t even enjoying the excess amounts of sugar I was eating. On top of that, it was wreaking next-level havoc on my skin. I used my favorite topicals to treat the breakouts, but it did nothing to stop new ones from continuously appearing.

In an attempt to clear my sugar-induced acne, I tried cutting it out completely. By the end of Day 2, I was in a state of pure misery, so I just called it a day and ate the cake. Being in a full-time murderous temper isn’t really my thing. It was time to call in the experts, namely, Jessica Sepel, nutritionist and founder of JSHealth Vitamins. Her line of holistic supplements included one designed to balance sugar cravings, and it seemed like a much smarter way to reset my habits and get my skin back on track. Spoiler alert: It took only a couple of weeks for the JSHealth Metabolism + Sugar Support Formula to accomplish exactly that. Ahead, my honest review of the best unexpected supplement I’ve tried to treat sugar-caused breakouts. 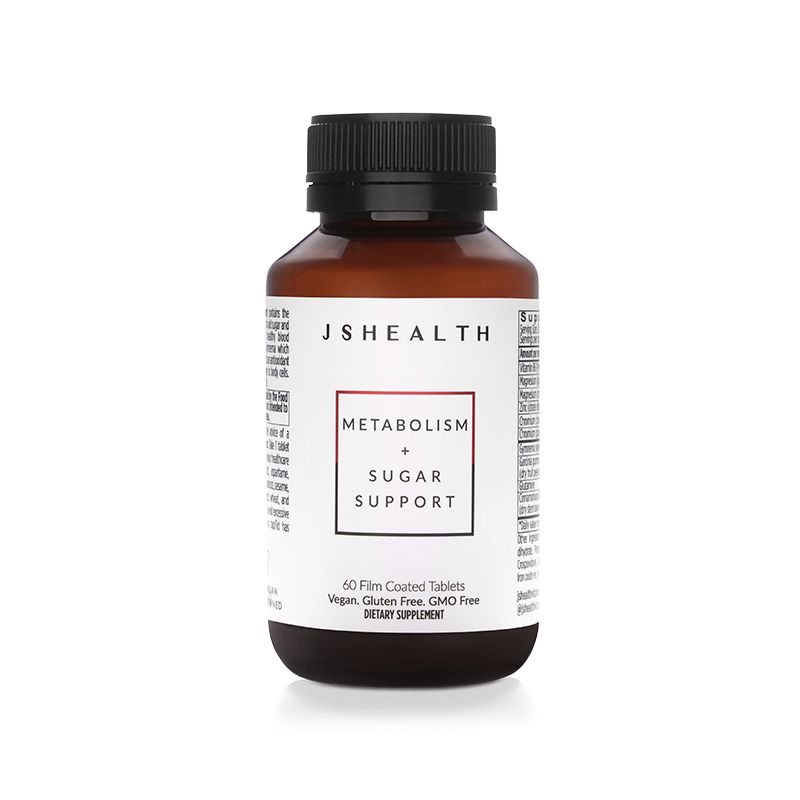 The Link Between Sugar and Acne

I should preface this by saying that thanks to a combination of genetics and an extensive skin-care routine, I rarely break out. I get monthly hormonal breakouts on my chin, but they’re usually contained to one or two pimples at a time. The acne I was experiencing during my sugar cravings phase was clustered across my cheeks and my nose, two areas that usually remain acne-free.

“While hormonal acne in adult women typically occurs on the lower third of the face and jawline, sugar-related acne can occur anywhere on the face,” says dermatologist Joshua Zeichner, MD. “I anecdotally find that these breakouts tend to be red, angry bumps and pus pimples rather than blackheads or whiteheads.”

Dr. Zeichner’s description lined up closely with what I was experiencing: painful, large pimples that were occurring outside of my usual breakout zones. “Foods with a high glycemic index can cause acne breakouts in predisposed individuals,” he says. “High sugar loads in the blood increase levels of a messenger known as IGF-1 (insulin like growth factor -1), which activates oil glands, increasing oil production and promoting inflammation in the skin.”

How It Curbs Sugar Cravings

Sepel and I are in agreement that sugar on its own isn’t something that should be demonized. “Our bodies would not function optimally without sugar,” she explains. “Natural sugars found in fruits, vegetables, dairy, and fiber-rich whole grains can do wonderful things for our health. It’s when an excess amount of added sugars are consumed that sugar can have negative effects.” I wasn’t trying to stop eating any of the above, and I still wanted the occasional fresh-out-of-the-oven cookie; I just didn’t want to constantly feel like I needed to eat an entire sheet pan full of cookies.

Each bottle of the Metabolism + Sugar Support Formula contains 60 tablets, which are decidedly not on the small side. I’ve been taking vitamins for years and this doesn’t pose a problem for me, but you can try mixing them in with yogurt to help them go down more easily. You’re supposed to take one tablet with your breakfast, and another at lunchtime. Sepel says you should feel the results within 2-4 weeks of starting the formula, although results may vary.

According to reviews, most of the brand’s customers take this formula purely to help their sugar cravings, but I noticed it also contains ingredients that boost skin health. “The main active ingredients include zinc, chromium, gymnema, vitamin B6, and magnesium,” says Sepel. “Zinc can assist with the metabolism of sugar and carbohydrates, and acts as an antioxidant to reduce free radicals in the body, supporting skin health and immune system function. Chromium assists with the metabolism of macronutrients such as glucose. Vitamin B6 supports the nervous system, and magnesium can help support energy levels and glucose metabolism.”

The hero ingredient, gymnema sylvestre, is a plant commonly used in Ayurvedic medicine, where it’s popularly known as “gurmar,” or sugar destroyer. Studies have shown that it affects blood sugar homeostasis, controls sugar cravings, and even suppresses the taste of sweetness.

“The active compounds naturally found in the Gymnema plant have the ability to delay the absorption of glucose in the blood,” says Sepel.

I started taking the formula with my breakfast and lunch, but didn’t hold myself back from eating sugar if I had strong cravings for it. I was prepared to wait about three weeks for the effects to really kick in, but by the end of the first week, I had already noticed a dramatic reduction in how often I physically craved sugar. Part of that might have been a placebo effect, but considering how persistent my sugar cravings had gotten for an entire month, I was truly surprised that they never came back.

During week two, I sometimes only took one supplement a day, more out of forgetfulness than anything else, but found that my sweet tooth seemed to have been reset for good. A single application of Renée Rouleau’s Triple Berry Smoothing Peel (a longtime Byrdie favorite) faded my last round of sugar breakout-caused dark marks, and no new acne emerged after that. My complexion quickly reverted back to its clear, dewy state. I eyed my bathroom mirror, waiting for more acne to emerge, but it never did. Now that my sugar consumption levels were back to their prior state, it seemed my face had also reached its own equilibrium.

I’m always going to be that person that loves following Instagram accounts dedicated to pastry cross-sections and baking decadent treats for my friends. It’s just who I am. I’m ridiculously happy that I can do that again now without feeling the nonstop need for more sugar, which was kind of ruining the entire experience. Plus, my skin looks amazing. And I didn’t even have to overhaul the contents of my bathroom cabinet to get there.