Summer skin in a bottle.

Really, I can’t believe there was ever a time in my life when I wanted to look entirely matte all day, every day. A matte finish has a smooth, sophisticated look, but come spring and summer, it’s almost always replaced by a desire for dewy, glowy skin. Think about it: When the weather heats up, isn't it better to work with the sweltering sun rather than against it?

Bobbi Brown built her now-legendary reputation on developing that same sort of effortless, no-makeup-makeup look that would define more than one generation—so, when she launched her best-selling new line, Jones Road Beauty, it makes sense that she would take that singular vision and 2022-ify it. The result? Something of the ultimate summer glow, bottled and diffused into a handful of universally-flattering shades. The Jones Road Shimmer Face Oil ($34) isn't Brown's first success with radiance-in-a-bottle, but it might just be her best — for now, anyway.

Released just in time for a sultry summer, the brand's new Shimmer Face Oil is a multitasking glow oil that can be worn alone, under, or over top of makeup. Available in four luminous shades (warm- and cool-toned pinks, a radiant gold, and a deeper bronze), the oil features a seamless texture and shimmery—not sparkly or gritty-glitter—finish. To put it simply, it looks the way your sweat would if you perspired pearly pink shimmer drops rather than, you know, sweat.

"The Shimmer Face Oil is a makeup-skincare hybrid containing nine nourishing oils," explains Bobbi Brown herself, ticking off sunflower seed, grapeseed, and coconut oil as three all-star ingredients that deliver a lightweight moisture boost. "Even though it’s oil-based, it is not greasy at all. It’s an all-around great product that adds just the right amount of luminosity, especially on those days when your skin could use a little pick-me-up." Plus, she adds, it smells clean, fresh, and distinctly spalike for a mood-boosting burst of fragrance every time you dispense a few drops.

Like nearly all of Bobbi Brown's greatest hits, the Shimmer Oil is perfect for fingertip application which makes it ideal for warm weather hangouts with limited time (or mirrors) for touch-ups. Because it's so natural-looking, you don't have to be precious about where it's applied. Unlike a traditional highlighter, this hybrid can go anywhere on the face for an all-over luminosity, or strategically applied to the face's high points (think cheekbone tops, brow bones, nose tips, and cupid's bows) to put the focus on your bone structure. As a true multitasker, though, it's good for much more than that, too.

"I use the Cool Rose shade as a blush on the cheeks and then I'll go in with the Midas, which gives a subtle golden glow, and use it on the top of the cheekbones as a highlighter," Brown tells Byrdie, calling the oil an excellent subtle blush. "I also love these Shimmer Face Oils for the body," she adds.
"When applying them, just remember that a little goes a long way. If you're using it on the face, start with half a pump but if you're applying it to the body, go for two pumps." As Brown also points out, all four shades in the collection are versatile and universal, making it easy to mix, match, and blend for different body parts, aesthetics, and moods.

As a lifelong Bobbi Brown stan (yes, of course, I had the book), I was unsurprised to find the entire Jones Road collection an excellent assemblage of pre-produced products. The Shimmer Oil fits right in as a versatile, well-formulated, relatively goofproof way to dial-up an everyday look or add even more drama to a more major one.

What struck me first when I tried each shade out was that lightweight consistency Brown mentioned. As much as I love being a dewy, super-shiny girlie, I'm still a bit oil-shy as they can often sit on my face rather than sinking in or not play too well with my water-based makeup. None of that applied here, though. The drops sink into skin much more like a moisturizer but deliver the same sort of light-catching radiance as a full-fledged highlighter. The blend in extremely well with fingertips and just slightly less so with a beauty sponge—it definitely worked with my classic Beautyblender ($20), but the sponge absorbed more product than I'd ideally like.

Even more incredulous? It didn't break up any cream or water-based products I layered under it. While I'm probably a bit too sweaty to feel comfortable wearing it all over or alone with no makeup, I love how it looks with no-makeup makeup (naturally!). If "glazed donut" is at all a goal you're working toward, this is the shortcut you've been waiting for. 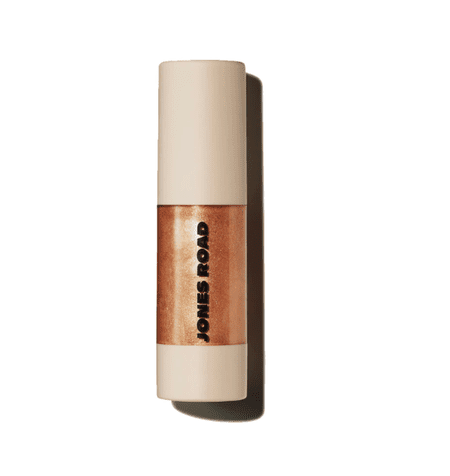