Exclusive: Jennifer Lopez Tells Us the Scent She Wears to Feel "Sexy and Strong"

She even pairs it with sweatpants.

We know Lopez now as an everything mogul who can turn a billion-dollar profit just by mentioning a product. But back in 1998 when the singer first announced fragrance as part of a complete lifestyle collection, it was a legitimately bold move and unlike anything other celebrities were involved in. That fragrance, of course, turned out to be the downright iconic Glow by J.Lo. Not only did it managed to become the best-selling celebrity perfume of all time (it did $100 million in its first year alone) but Lopez can be credited as the harbinger of the entire celebrity fragrance industry. "Glow changed everything," Chandler Burr, former New York Time fragrance critic and author has said. "Elizabeth Taylor was one of the first [to have her own scent], but Glow kicked the whole thing into overdrive."

In fact, memories surrounding the creation of Glow are still some of J.Lo's most cherished moments to this day. "It was such a big deal for me to have created my own fragrance," Lopez tells Byrdie exclusively. "And I remember thinking how cool it was to have my name on it with a little necklace and how meticulously I tested samples for it. It's such a special and distinct memory for me."

Now, 18 years and $2 billion later, J.Lo is celebrating the one-year anniversary of her 25th perfume, Promise. Originally created to capture the magic of one very excellent time period in which Lopez turned 50, got engaged to baseball star-turned-tycoon Alex Rodriguez, and starred in the smash-hit film Hustlers, Promise feels like the olfactory version of a romantic keepsake. Earthy and warm with crystallized amber and wood but still distinctly feminine thanks to lush floral and citrus top notes, Promise is strong and sweet—kind of like Jenny from the block herself. "This particular scent makes me feel sexy and strong," she says. "It's fruity and floral so it's a little more fun." 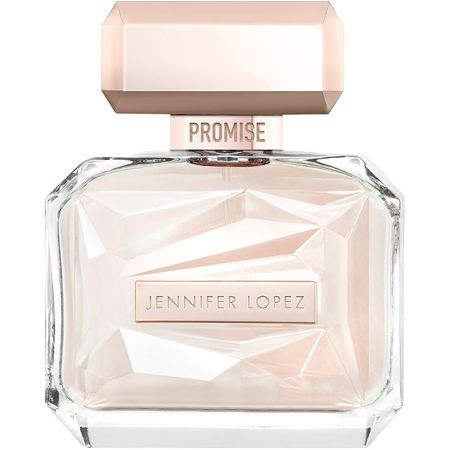 The upbeat fragrance might not have many places to go in the (hopeful) final months of stay-at-home orders but layering on some perfume even around the house is something Lopez swears by. "I admit, these days I'm a little more casual around the house in sweatsuits but the one thing I really do still enjoy wearing is fragrance," she tells us. "It gives me a little boost of energy for the day, and I have different scents for different moods. Just like everyone else, I have had a lot of different moods this year!"

Against a career backdrop as storied and awarded as Jennifer Lopez's, it's easy to forget how impactful her brand has been for decades now. At this point, it's safe to say we'd try J.Lo-branded anything.