Amy Lawrenson
Amy Lawrenson was the Editorial Director for Byrdie UK and has worked as a freelance beauty and health journalist for over 13 years.
Byrdie's Editorial Guidelines
Reviewed by
Joe Masiello 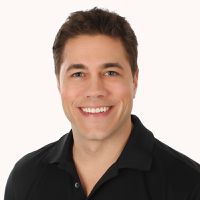 Scheduling a personal training session with Jennifer Lawrence’s trainer when I haven’t been to the gym in months was, admittedly, probably not my best idea. I have used every excuse in the book to get out of going to the gym lately: new job, moving house, tiredness, new job (did I mention that?). It’s ridiculous because I really enjoy exercise; I’m a qualified personal trainer for goodness sake. But it just goes to show that it’s easy to get out of a routine, despite your best intentions, and once you’re out of the swing of things it’s hard to get going again. Life and excuses get in the way.

So to say I was a little nervous about training with Dalton Wong (who also trains Kit “Jon Snow” Harington) was an understatement. I had visions of keeling over in the cobbled street outside Twenty Two Training like one of the victims in The Hunger Games. The funny thing is, Twenty Two Training is discreetly tucked off a busy street near Gloucester Road tube, but it’s not at all intimidating, rather it feels homely.

“Come up!” Wong yelled to me after he’d buzzed me in. Straight away he thrust a glass of what looked like green pond water into my hand (it was water laced with a minty-tasting and alkalizing chlorophyll supplement), and we were back downstairs ready to train.

Wong’s aim with all his clients is to get them doing functional training, and by that, he means working on areas of weakness by doing functional full-body exercises. His aim with Lawrence was to get her fit enough for the demanding schedule and action scenes in the Hunger Games franchise.

Wong is incredibly friendly and chatty—we talk about everything from work to holidays but the chatting doesn’t take away from the exercise. I’m not allowed to hang around. We start with a warm-up routine of stretches on the floor to get me primed for the workout (at this point, I still had no idea what the workout would be like). “I don’t like to ruin my clients,” Wong tells me. “I want you to leave here and still have the energy to be able to get on with your day.” I like the sound of that.

Another aim for a lot of his star clients is to ensure they look poised on the red carpet and at events. This leads me nicely onto the next thing I learned from Wong…

“There is no point spending hours in the gym if you’re not going to work on improving your posture,” says Wong, encouraging me to stand up tall, shoulders pinned back. Looking at myself in the mirror, admittedly I do instantly look thinner, “I look like I’ve lost a couple of pounds already,” I say, to which Wong nods knowingly. Like a lot of desk-bound people, I have terrible posture, so throughout the workout, whether I’m doing side steps with a resistance band around my calves or going full pelt on the VersaClimber, Wong reminds me to pull my shoulders back.

We do some specific postural work, including some Standing V’s and T’s, where I have to get into a squat position with my hands down by my side. For a minute I have to bring my arms up into a V-shape above my head, squeezing the muscles in my back before bringing my arms back down to the start position, repeating until the time is up. Then, still in the squat position with glutes squeezed tight (which is now starting to burn), I have to bring my arms out into a T-shape parallel to the ground and back to the start, repeating for 60 seconds.

Wong gets his clients to do these moves a few hours before red carpet events, to remind the muscles in the shoulders and back that they need to stand to attention, rather than slump down.

The posterior chain is the collection of muscles that run down the back of your body. They include shoulders, back, and glute muscles, hamstrings, and calves. “Most of my workouts are focused on the posterior chain,” Wong tells me. “You burn more calories and get better results.”

In reality, this means a lot of squatting with a mini band around my legs for added resistance, and a series of lunges (front, out to the sides, and back) that test both my posterior chain, stability, and coordination. I also do a couple of high-intensity rounds on the VersaClimber, an unforgiving piece of equipment that has your body moving in a crawling sort of motion, vertically. All the while Wong gets me to focus on the muscles I’m working to ensure optimum results, as well as never forgetting my posture.

Moves that target your posterior chain include rowing, deadlifts, squats, lunges, and glute bridges. Wong doesn’t focus too much on isolating smaller muscles. “I get a lot of women who want to do lots of arm exercises, but I try to explain that you’ll get better results by working your larger muscles and focusing on your posture,” he explains.

Essentially you can’t spot-reduce, meaning by doing targeted arm exercises you’re not going to melt excess inches from your arms. Instead, you have to look at the bigger picture and target your body as a whole by burning more calories over time to reduce your body fat so your lean muscle starts to show.

What’s comforting to know, is that a good routine of squats and lunges will help you to sculpt a firmer, perkier bum. While abs are another thing entirely as a whole load of crunches won’t get you a six-pack. “Your abs are all diet,” says Wong, as I look down at my tummy.

Besides going hard on the VersaClimber, much of Wong’s sessions are a collection of slower, more considered moves. A case in point is when he asks me to do some mountain climbers, I drop down and start going for it. “Stop,” he says. “We just got your heart rate up on the VersaClimber; you need to go slow,” he tells me. I get into a high plank position and slowly draw my right foot in.

Wong gets me to point my toe forwards (harder than it sounds when you’re in that position) then he instructs me to squeeze the glute muscles, hamstrings, and lastly the calf in my left leg before I can draw my right foot back out, switching over to bring my left leg in to repeat on the opposite side. I’m knackered after six reps, which is ridiculous, but just goes to show that I wasn’t getting nearly enough out of the mountain climbers I had been doing before.

Wong is all about efficiency of movement over speed, and as someone who has never much liked HIIT and much prefers a long, slow run (LISS) or heavy weightlifting, I am totally on board with Wong’s way of training. I leave with a spring in my step, ready and excited to take on the gym again. It’s little wonder his book is called The Feelgood Plan ($8.50).

6 Barre Workouts That Are the Perfect Slow Burn
Featured Video