Bella has been in editorial for four years, and has been with Byrdie since June 2022. Most recently, she was at Glamour magazine for nearly four years, where she covered all things beauty.

The second season of The White Lotus was truly the television gift that kept on giving. It made me actually look forward to Sundays, gave us plenty of meme material—I, for one, will be running "these gays are trying to murder me" into the ground—and blessed us with a plot heavy on the Jennifer Coolidge.

Any time Coolidge graced my screen felt like a treat, but her last scene in the finale was particularly delicious. Of course, I was sad to see Tanya leave us, but if you're going to die, there are worse ways to go than after a weekend of partying in a palazzo. As a refresher (and spoiler alert!), Tanya discovers the men she's stuck on a yacht with are in cahoots with her evil husband and planning to have her killed, and after shooting them out, she tragically falls off the boat while attempting to jump onto the dingy.

Yes, the several white wines she slurped down on the yacht may have something to do with her tripping, but it was her crystal-encrusted heels that really did her in. The heels in question? Not a pair of designer pumps like you may expect, but Betsey Johnson heeled PVC sandals, which cost just $52. Looking at the shoes, it's easy to see how she lost her footing in the towering, bejeweled heels, even after her (tragically ineffective) personal pep talk, "you got this." 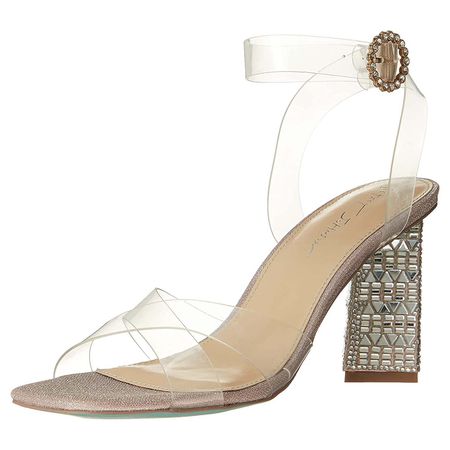 Another hidden detail in Tanya's outfit that internet sleuths pointed out? Her finale floral dress, made from vintage Emanuel Ungaro silk, was the same fabric as the dummy in the car at the Godfather museum Albie and Portia visited earlier in the series. In the second Godfather film, the wrong mark is killed, hinting early on that Tanya's fate was, unfortunately sealed in a easy-to-miss fan easter egg.

In a post-finale featurette, the White Lotus creator Mike White explained his reasoning behind how everything unfolded. "It felt like she needed to give her best fight back and that she, in a way, had some kind of victory over whoever was conspiring to get rid of her," he says. "So it just made me laugh to think she would take out this whole cabal of killers and that, after she’s successfully done that, she just dies this derp-y death. It just felt like that’s so Tanya." If only she had been wearing different shoes.

Welcome to the White Lotus: 7 Outfits Inspired By Its Guests
Featured Video