Boxing Workouts: All Your Questions, Answered 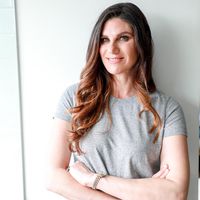 What Is Boxing? Type of Class Best For What to Expect During a Class Benefits of Boxing Safety and Injury Considerations
At-Home vs. In-Studio Boxing vs. Kickboxing What to Wear How to Get Started The Takeaway

Historically, boxing was considered a combat sport and involved people beating each other into oblivion while onlookers cheered and shouted. However, in recent years, the fist-fighting competition has morphed into one of the planet's trendiest workouts. According to ClassPass, an app connecting people digitally to fitness classes held around the world, boxing ranks as one of the top digital workouts. Brands that make it easy to box at home, like FightCamp and Boxx, are helping to fuel the growth. So what exactly is boxing, why did it become so popular, what does it entail, and how will it change your body? Here is everything you need to know about it.

Shanie “Smash” Rusth, an undefeated professional mixed martial artist and FightCamp Trainer, explains that while boxing might be having its moment on the fitness front, it is actually one of the oldest forms of exercise in history. “Research shows people boxing in ancient Egypt, and it became an official Olympic sport in 688 B.C,” she explains. “Boxing has been around for thousands of years and is a well-loved sport across the world.”

However, up until the last decade, it was mainly men reaping the rewards of boxing. Over the last few years, boxing has been adapted into a mainstream workout—and even women are getting in the fighting form via the method. Gone are the days when people think about the sport in terms of blood, bruises, and bulging muscles. “You can look at a fighter’s physique and know that boxing is a great workout,” explains Rusth. “While there have always been training gyms geared towards people who competed in the sport, it was only a matter of time before the fitness industry noticed how great a workout it was and that it could be translated into an activity that anyone could do.”

“Boxing has become popular today because people realize the benefits and joy of releasing a lot of pent-up stress,” adds Jones. It doesn’t hurt that some of the top supermodels globally—Gigi Hadid, Gisele Bundchen, and Karlie Kloss included—are unofficial spokeswomen for the sport.

While the sport of boxing involves two fighters entering the ring wearing padded gloves to knock their opponent out, usually in three to twelve three-minute rounds, a boxing workout has been translated into something that anyone can do with the help of a bag.

The great thing about boxing? It is a three-in-one workout, serving as high-impact cardio, strength, and also high-intensity interval training. “You will go hard for three minutes and then take a break for a few minutes,” Rusth points out. “Boxing trains cardiovascular strength and endurance more effectively than the majority of the workouts available today. It has the power to condition the human body into an energy-efficient machine.

Boxing is a great all-around, full-body workout beneficial for anyone who wants to build up their strength and endurance while blasting calories, says Rusth. "It’s also good for coordination, mental focus, and it helps to relieve stress,” she says. Specifically, it can help strengthen your upper body and core, adds Jones.

What to Expect During a Boxing Class

Rusth explains that the average boxing class consists of a dynamic warmup, followed by a certain number of three-minute rounds of striking (punching) and footwork, intermixed with plyometric bodyweight exercises and core exercises.

“I begin my workouts jump-roping for about six minutes,” Jones reveals. “Next, pick up some small hand weights (two to three pounds) to shadow box, focusing on footwork and punch execution. After the warm-up, it’s time to put the gloves on for rounds on the heavy bags and mitts with your Coach.” However, no boxing workout is complete without some high-volume core work. “Don’t start counting till it hurts!” he suggests. “After each boxing session or class, I feel challenged, liberated, and ready to take on the world.”

These Online Self-Defense Classes Will Help You Feel Empowered

While competitive boxing is one of the most dangerous sports around which busted lips, headaches, rib soreness, and black eyes are all too common, a boxing workout is extremely safe.

The more common injuries may include ankle, wrist, and shoulder soreness or sprains, says Jones. Also, to prevent injuries to your hands and wrists, “make sure to properly wrap your hands and invest in a good pair of gloves,” adds Rusth.

Due to the increased popularity of boxing studios, where you can take classes with boxing trainers privately or in group sessions, at-home boxing is now one of the most popular at-home digital workouts. FightCamp, a popular at-home boxing workouts, offers over 800 professional boxer and trainer-led classes through an app with new ones added daily. The initial investment is a little over $1200. It includes everything you need to get your punch on, including a free-standing boxing bag, gloves, wraps, punch trackers, and a heavy workout mat, while a membership will set you back an additional $39 per month. Each class is similar to that you would take in a studio setting with the addition of connectivity. For example, you can track your workouts and watch your progress with FightCamp’s punch trackers.

While boxing is basically its own fitness genre, Rusth points out that kickboxing is the closest thing to it. “It is more challenging because you are adding kicks to the workout,” she says. Also, “It works the lower half of the body more than a traditional boxing workout.”

What to Wear to a Boxing Class

Jones suggests showing up to a boxing class in boxing or lightweight sneakers and comfortable fitting pants or shorts that you can move around in, with your hair secured in a ponytail or bun.

She also suggests investing in a pair of hand wraps and a pair of 12 oz or 16 oz boxing gloves, as well as a towel to wipe away the sweat!

How to Get Started with Boxing

Anyone can make boxing their go-to workout. However, Rusth suggests starting with a beginners level class and working your way up. “Go at your own pace until you feel comfortable with the punches and exercises.”

Jones adds that boxing is just as much a mental workout as it is physical, so choose your instructor and gym wisely. “Finding the right coach and gym is key to your development, do your research and find the right one for you.”

Boxing is an effective cardio, strength, and HIIT workout all-in-one. However, unlike many other types of workouts, it is also a skill that you can improve over time. In addition to helping you achieve your fitness goals, including building muscle, improving cardiovascular fitness, and blasting calories, it can also improve your overall confidence and inspire empowerment. A boxing workout can be done in a fitness studio, boxing gym, or even the comfort of your home, making it incredibly convenient. However, as with any exercise regimen, you should be cleared by your doctor before participating.

Rumble Boxing Is a Cathartic Workout—Here's What to Expect From a Class
Article Sources
Byrdie takes every opportunity to use high-quality sources, including peer-reviewed studies, to support the facts within our articles. Read our editorial guidelines to learn more about how we keep our content accurate, reliable and trustworthy.
Featured Video