The first thing that surprises me is the sound of her voice.

I don't know what I was expecting—the overzealous squeals of a Los Angeles teenager, perhaps. Whatever the reason, it truly did not occur to me before dialing London's Hotel Café Royal that Iris Law, the 16-year-old daughter of actor Jude Law and the new face of Burberry Beauty, would, of course, have an English accent. "Thank you so much for talking to me!" are the first words out of my fanatical American mouth. "Oh, that's alright," she responds, dainty and muted. We are 10 seconds into our conversation, and already the teenage model, whom Harper's Bazaar has deemed "the next Lily-Rose Depp," is infinitely cooler than I.

Iris's debut as Britain's new model to watch comes with the launch of Burberry's Liquid Lip Velvet ($34), a buildable matte lip color available now on Burberry.com. Iris has gotten to know these 14 saturated lippies very well over the course of her time with the campaign. She uses them for everything: her everyday makeup, upscale events, she even hacks them into cream eye shadows (but we'll get to that later).

That's the second thing that surprises me about Iris: Hearing someone so young (and so British) talk about makeup is like having an alien from a more enlightened species school me on what having an individual beauty identity really means. There are no rules with Iris—from the inventive ways she uses products to the sources she looks to for beauty inspiration, she seems to operate on pure instinct.

Before the world turns this wide-eyed Brit into a superstar, get a sense of who she really is now. Read on to discover five of Iris Law's fascinating, uncensored beauty secrets.

The Best Inspiration Comes From Movies

For someone born after Y2K, you might expect Iris's beauty inspiration to come from, I don't know, Kylie Jenner's Snapchat. But the model doesn't look to celebrities for ideas; instead, she looks to the characters they play.

When I ask Iris to name her #1 beauty icon, she doesn't hesitate. "Margot Tenenbaum," she tells me in almost a whisper, referencing The Royal Tenenbaums, a film that came out precisely one year after her birth. "Because we both have the short hair, and I really like her little clip."

Other than stylized fictional characters, Iris looks to her friends and fellow Londoners for inspiration, but never celebrities. Even when I ask her to, she can't name a single one.

Repurpose All Your Makeup Products

When we ask celebrities to describe their best beauty tips, most of them name some technique they learned from a famous makeup artist or stylist on set. But endearingly, Iris tells me her best beauty tip is "something I think I just made up myself." Her favorite trick for glowy skin is simply to take her favorite lip balm (Burberry's First Kiss in Soft Peach) and slather it everywhere. "I always do lip balm on my lips, but then I also put it on my eyelids up to my eyebrow, and also my cheekbones," she says. "It kind of gives your face a bit of dimension and makes you look more alive. You can do that when you're wearing makeup or when you’re not wearing makeup, and it just gives you kind of a glowy, lively face."

Lip balm isn't the only product Iris uses creatively. She tells me one of her favorite looks to play with right now is "colorful eye shadow" (the '80s are back, if you haven't heard), and she's taken to repurposing Burberry's new liquid lipstick to create the look.

"I've been experimenting," she says. It sounds funny at first, but the liquid texture of these lipsticks is lightweight and whipped—not at all sticky—making it a smart dupe for cream eye shadow. "I use the Dark Rosewood [shade] for every day because it makes your eyes look more bright, but at the same time it's not too much," Iris says. "I'll wear Oxblood on my lips and my eyes as more of a bold thing."

The girl is an artist.

If you have even the faintest desire to cut your hair off, Iris will make you want to go for it. She keeps steering the conversation back to her chin-length chop, which she just cut last summer. It's clear that slicing off her childlike lengths was one of Iris's first tastes of adult independence; and though her demeanor is subdued, I can tell she's enthralled by it. "For a long time I was waiting to get my hair cut shorter," she describes, a smile in her voice. "I’m just really happy that I’ve done that. I can’t think of anything else I want to do to my look in the future because I was just mainly thinking for so long about my hair." Needless to say, the bob fits her like a glove.

When I think of what today's teenagers are good at, my mind flies to social media. Iris's 427K Instagram followers enjoy a feed of grainy, cool-girl selfies and images of her British pals making moody eyes at the lens. But unlike the teens I imagine, Iris's social media presence is low on her priority list—the photos take a backseat to real-life experiences.

"I don’t think I’ve ever taken a picture specifically to post on Instagram," she says. "I think that’s kind of the key thing because you don’t want it to feel too forced. If I see something that looks nice, then I'll just always take a picture. And I just caption them in the moment." In other words, Iris's social media image is as effortless as it looks.

When in Doubt, Use Coconut Oil

There is actually one thing that Iris already has in common with the Hollywood crowd: an obsession with coconut oil. If she only had $20 (or British pounds, as it were) to spend on beauty products, she'd stock up on the stuff. "I use that on my hair, body, and face, so it's very useful and not expensive," she says. (I know for a fact that Shay Mitchell, Kourtney Kardashian, and Priyanka Chopra all agree.)

I would have killed to be as relaxed, cool, and composed as Iris is when I was 16. Hell, I'd kill to be that way now. But I figure the easiest place to start is with her look. I ask Iris how I can go about transforming into a Brit from the neck up, and she tells me the secret: All it takes is a pouty expression and a moody "dark eye."

Iris recently learned the art of the eye contour, where you use dark shadow to define the crease and bottom lid of each eye. Before hanging up the phone, she tells me to use Burberry's Eye Colour Contour ($29), and I promise her I will.

This is only the very beginning, the prequel, to Iris's promising career. In five years, who knows how big she'll be. But in the meantime, I'll be over here in Los Angeles, practicing my British-girl eye contour, remembering the time when Jude Law's 16-year-old daughter told me all her secrets.

Watch Iris's campaign video for Burberry's Liquid Lip Velvet, and then shop the product below! 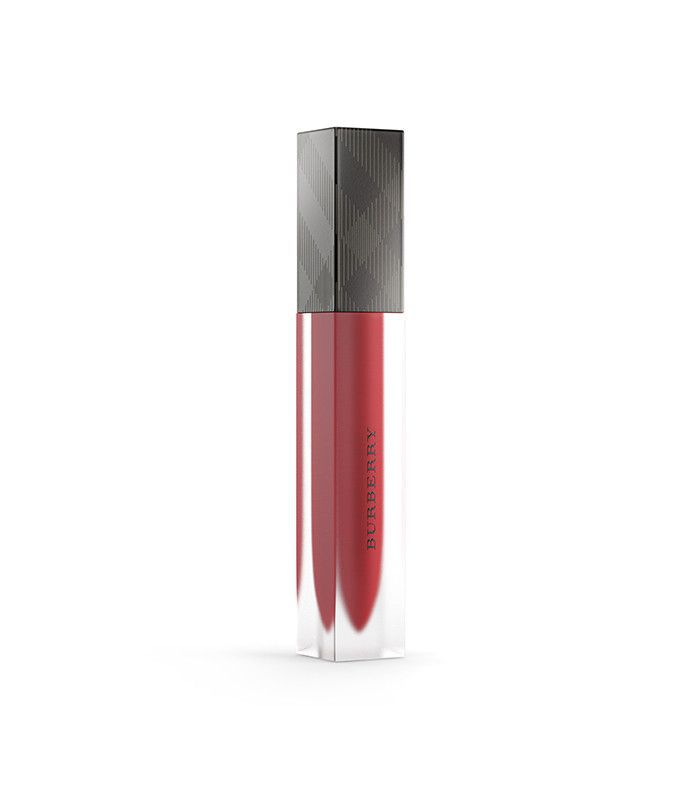