Ingrid Nilsen on Quitting YouTube and Following Her (New) Dreams 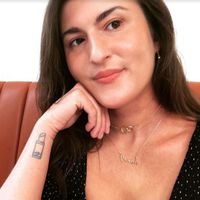 Kaleigh Fasanella
Kaleigh has worked as a digital writer and editor in the beauty and wellness space for over five years now.
Byrdie's Editorial Guidelines

Ingrid Nilsen calls me at noon on the eve of Inauguration Day, her tone light and cheery despite the lingering anxiety caused by The Capitol insurrection just two weeks prior. “Well, this is fitting,” I think, considering the theme of our interview is New Beginnings, and for so many people in America, President Biden’s administration symbolizes exactly that: the start of something new. Something (hopefully) better. For Nilsen, who spent over a decade of her professional life on YouTube, starting anew meant leaving the platform she first fell in love with nearly eleven years ago, when she was desperately seeking a creative outlet after grieving the sudden death of her dad. “I had the most incredible ride,” she says, a smile emanating through the phone. “I initially got into it because I was in a really difficult place and wanted to explore my creativity, but I never, ever thought it could turn into a job, let alone a career that lasted a decade.”

During her time as a content creator, Nilsen had the chance to collaborate with countless big-name brands, including Fresh, Briogeo, and Living Proof—to name just a few. But even more importantly, she used her platform to advocate for causes like LGBTQ+ rights and equal access to period products, all while promoting the importance of self-love and staying true to yourself in the process. Above all, though, Nilsen says it’s the amazing connections she was able to make, and the close-knit community she built during this decade, that means the most to her. “Looking back, I got to connect with so many interesting people who had really similar lives to myself, and that was incredibly healing for me,” she muses. She pauses for a second before adding: “In that moment when I finally posted my last video, there was such a huge outpouring of love from everyone; it was overwhelming.”

While it wasn’t an easy decision to leave her life on YouTube, Nilsen says a part of her always knew the day would come. “I remember telling my former production partner that I didn’t want to be making content into my thirties, and I said that in my twenties, so I knew it was coming, I just didn’t know exactly what it would look like or when it would be,” she says. “Ultimately, I think it happened right on time; you know, I’m 31 and I was trying so many different things creatively, but it just felt like I was being met with a lot of resistance. I think anyone who’s worked in a creative field can relate to that.” Nilsen recalls the moment when she finally realized it was time to quit. “It was pretty unremarkable,” she admits. “I was walking down the street one day, thinking about everything, and this thought-slash-question popped into my head: ‘What if I just stop?’ Honestly, I had never given myself the time or space to even dream about what it would be like if I did.”

Less than two months later, on June 30, 2021, Nilsen posted her final YouTube video titled, This One Is For You (My Last Video). “That was really the beginning of everything,” she says. “From there, it felt like the whole world just opened up and there were all of these possibilities in front of me.” Despite her newfound freedom, Nilsen had no idea what she wanted to do next with her career, a fact she was completely open about in her video. “I had no plans at all,” she says. “I was pretty much open to everything, so I let myself dream about all of these things that I had never seriously considered before, and that ended up being really helpful because it made me realize what I do and don’t want.”

After just a few short months of reflection and some much-needed R&R, Nilsen realized that she still wanted to run her own business, and from there, it wasn’t long before her latest venture—The New Savant—was born. “I was in Indiana with [my partner] Erica and her dad when I got the idea for candles,” she tells me, the memory still clear as day in her mind. “It didn’t initially start as a business idea though; I just remember being in the house, seeing a candle, and wondering to myself, ‘How do you make a candle? I bet I could figure it out.’ So I looked it up online, got some super basic supplies from a craft store, and made my first candles in the basement of Erica’s dad’s house on a ping-pong table.”

Immediately captivated by the process of candle-making, Nilsen set out to learn even more. “I’ve always adored fragrance and fell in love with the process instantly, so I started doing some digging on different forums and on YouTube, where I was able to learn from people who have been making candles for decades,” she tells me. “Finally, when we were driving back from Indiana, I said to Erica: ‘I would really love to try and turn this into a business and see if it could be my next ‘thing,’ because I could really see myself loving this for a long time.” And well, as the saying goes: The rest is history. Before we move on, Nilsen adds that she ultimately realized this had been brewing inside her for a long time; walking me even further down memory lane, she describes another time when she found herself wishing she could make her own candles. “I was in this incredible tea shop in Paris a couple of years ago, smelling all of their amazing different teas, and I remember when I walked out, I just kept saying, ‘I wish I could have a candle that smelled like those teas. I wish I could make my own.’ But at the time, I thought the process had to be really complicated and expensive. Somehow, this summer, everything seemed so much simpler. ”

Roughly three months later, the duo introduced The New Savant’s debut collection: a set of four holiday-themed scents made from 100% soy wax and essential oils. “For the holiday collection, I wanted four scents that were distinctly individual, but could also be burned together and still smell wonderful,” says Nilsen. "What I ended up with is Together, Evergreen, The Night Before, and Merry + Bright. Together is sweet and comforting, like baking at home with the people you love. Evergreen is crisp and woody and smells just like fresh pine trees. And The Night Before is inspired by sharing memories around the fireplace, so it's smoky with a touch of spice to make it warm and festive. Last, I wanted Merry + Bright to feel like the best holiday party with friends, where you're relaxed and having fun. This one is fruity and full of cheer.” Lo and behold, when the collection officially launched on December 3, it sold out in five minutes flat. Despite her 1.2 million followers on Instagram (which is where they did all their promoting for the candles), Nilsen was still blown away by the response, as she hadn’t fully known what to expect when she embarked on this new journey.

“How has this been different than what you did as a content creator?” I ask. Nilsen takes a few seconds to think before responding—she’s very thoughtful with her words, I note to myself. “The main thing is we’re selling a physical good now and you know, we have all of this inventory and there’s the packaging and shipping; all of that stuff that comes with selling an actual product,” she explains. “But there’s also the customer service aspect, which feels very similar to interacting with a community online. Fostering that community was the most important thing to me from the last decade, and it remains the most important thing to me in this new chapter.”

Before our call comes to an end, I put Nilsen on the spot: “What’s your best advice for someone who wants to shift careers and start over like you did?” She responds without missing a beat, referencing a quote from one of her favorite business books: Rework by Jason Fried and David Heinemeier. “One of the best quotes from this book is, ‘It doesn’t matter how much you plan, you’ll still get some stuff wrong anyway,’” she says, adding that it was exactly what she needed to hear when she was starting The New Savant. “Having a plan is great and I definitely recommend it, but I've found that being flexible has been even more important because no matter how detailed a plan is, it will never predict the future—there will be a mistake or two or three, and that's okay. The point is to take in the new information with humility, ask for help when you need it, and take the next step forward.”

When we finally hang up, I’m misty-eyed and overcome with emotion; if you had told me ten years ago—when I first started watching Ingrid’s videos and became obsessed with beauty—that I’d someday be telling her story, well, I never would’ve believed it. Over the years, I’ve had the honor of watching Ingrid grow, thrive, and live her best life, like a proud mom in the bleachers, cheering her on every step of the way. Now, as she starts this new and exciting chapter, I can’t wait to see what the rest of her story holds.

"Giving Up" Isn't Always Bad—Here's How to Lose the Shame